Cortina d’Ampezzo has an important primacy in Italy: it was the first Italian city to host the Olympic Games, on occasion of the VII Winter Olympics held in 1956.
But Cortina’s Olympic history will soon be updated with a new chapter, following the proclamation of Milan and Cortina as location for the 2026 Winter Olympics.
Even though six decades have passed since the first Cortina Olympics, the sports facilities used at that time can still be seen, and some of them can even be used

To make the idea of discovering Cortina’s Olympic past even more intriguing, we would like to suggest a route that will take you to the settings for the adventures in the Ampezzo valley of the most alluring secret agent in the world of cinema: his name is Bond, James Bond!

The list of fantastic, exotic international locations that have been lucky enough to host the exploits of the most famous secret agent in the world is virtually infinite, and there is no way that the Queen of the Dolomites could be missing. Cortina proved to be the perfect set for the twelfth chapter in the celebrated cinematographic saga, For Your Eyes Only, 1981, directed by John Glen. In this film, 007 was played by Roger Moore for the fifth time. He would be James Bond for another two films before abandoning the role.

The plot of the film was loosely adapted from two stories, Risico and For Your Eyes Only, in a collection by Ian Fleming that also has this latter title. The production largely fell back onto the usual clichés linked to 007, such as the pseudo-realistic Cold War context, the love-interest sub-plots, scenes of torture that do not have very much relevance to the narrative, and the international and exotic settings. The title song performed by Sheena Easton and the vertiginous action sequences filmed amidst Cortina d’Ampezzo’s sports facilities were particularly memorable.

This mountain resort seems to have been selected principally for the wide range of opportunities that it offers for superb panoramic views and adrenaline-charged sequences: the downhill skiing pistes could be used for high-speed chases with off-piste interludes amidst pine trees, and vast expanses of white snow, while the sports facilities dating back to the 1956 Winter Olympics were also ideal for the same purpose.

The first sports facility to appear in the film is the imposing Olympic Ice Stadium. Built for the 1956 Winter Olympic Games, it hosted both the opening and closing ceremonies.
It was initially an open-air stadium, with horse-shoe-shaped timber stands on three levels around half of its circumference, while the remaining section of the rink reached the bar area. After about ten years’ work, in 2003 the Stadium became a roofed facility.
The Olympic Stadium will once again be a highlight of top-level sport on occasion of the 2026 Games. The work planned for the event comprises the improvement and extension of the changing rooms behind, enhanced accessibility, the installation of a museum itinerary to highlight the structure and its history, the creation of exclusive sky-boxes, and the construction of curling rinks under what is now the play area.

In the film, at the Stadium bar with its open-air tables, which at that time looked directly onto the ice rink, Bond and the Italian agent Ferrara meet the Greek Kristatos, who is there watching his protegée Bibi (played by American figure-skater Lynn-Holly Johnson) training on the rink. The Stadium, with both the internal rink and the external car-park, reappears again in the movie, this time by night, when 007 leaves Ferrara in the fiery-red Lotus Exige Sport 350 parked outside and is then attacked by men disguised as ice-hockey players after he steps onto the rink.

Of course, James Bond could not miss the chance of skiing in the company of a beautiful girl, and the slope on which he and the young Bibi enjoy the sun and the fresh snow is the famous Olympia delle Tofane piste.
This famous piste starts from the Pomedes area at 2,348 m and every year it hosts the women’s World Cup downhill races.
In addition, the piste will also be used for the 2021 Alpine World Ski Championships.
Just as for most of the sports and adrenaline-charged scenes, a stuntman stood in for the actor Roger Moore for the skiing sequences. However, for a few brief moments, Moore was filmed close-up while he was skiing. This was made possible by the trick of towing the actor behind a sled to ensure that he was not taking any risks. 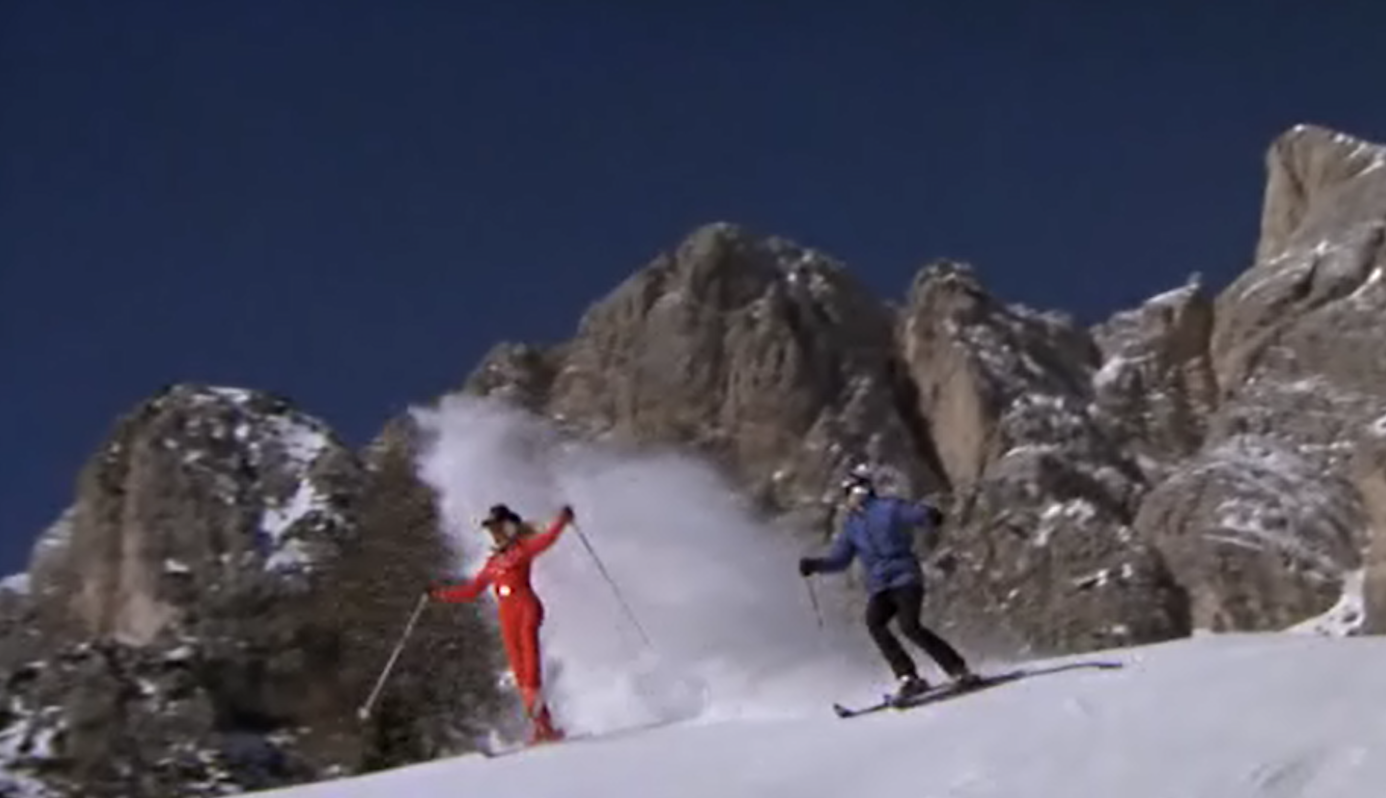 The Trampolino Olimpico Italia ski-jump, one of the most celebrated symbols of Olympic Cortina, could not be omitted from a review of the Olympian locations that have provided the setting for James Bond and his adventures.
In the film, Bond reaches the ski-jump during an astonishing chase in which he is pursued by a number of killers, and after a risky off-piste descent, skiing through the woods, he climbs to the top of the structure and takes the jump, while the East German biathlete on the landing slope tries to shoot him with a rifle.

The first ski-jump to be built here dates back to 1923, and it was constructed by means of funds provided by Cortina’s hoteliers and Baron Carlo Franchetti, to whom it was dedicated.
The Trampolino Franchetti was renamed the Trampolino Italia in 1940, when a new structure was built.

In 1955, in expectation of the 1956 Olympics, the jump was completely demolished and renewed, becoming the imposing construction that still today greets visitors arriving in Cortina from the south. In 1956, the Trampolino Italia jump hosted the ski-jumping and Nordic combined events, but even before the Olympic Games it was chosen for important sports competitions: in fact it was used for the 1927 Nordic World Ski Championships and the cancelled 1941 World Championships.
For the 2026 Olympics, the structure will be improved. Its historical and social value is particularly important, not just for the local population: it is a “monument to sport and tradition” that will welcome tourists and sportspeople on their arrival in Cortina. The area will also be used for some ceremonies and activities during the Games.
Today the jump is no longer used. It was closed in 1990, but the landing slope has now become a football pitch. Local festivals and celebrations are organised in the area around the structure, which is easy to reach on foot from Zuel. 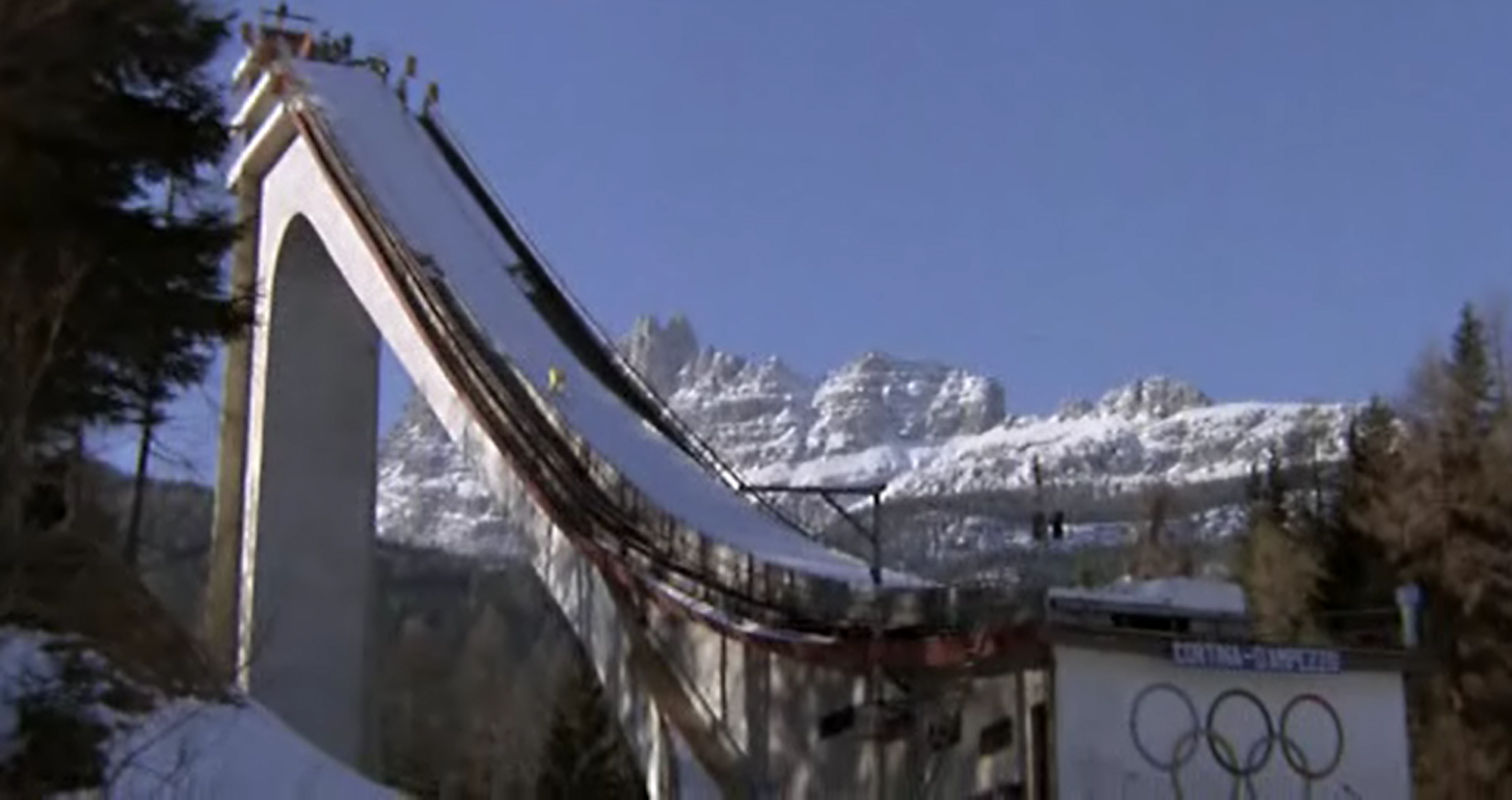 Even though in the film 007 ends up on the Eugenio Monti bobsleigh track, still hotly pursued by the German athlete-hitman on his motorbike, in actual fact the bob track is in a completely different location with respect to the ski-jump.
But we all know that cinema always succeeds in altering real distances, and it can make locations far removed one from another seem very close. And of course, nothing is impossible for James Bond. Before his hair-raising entrance onto the bob track, we see a four-man bobsleigh team sprinting with their bobsled from the start area, before discovering that Bond is behind them on skis, in turn pursued by the gunman on a motorcycle.

The track was built in 1924, but the earliest documented activities involving bobsleighs in Cortina and in Italy date back to 1905-1906. It was closed in 2008, and its refurbishment has been planned for the important sports events scheduled for 2026.
The work will retain the plan of the course, while undergoing homologation so that the track can also be used for skeleton and luge events (widening the tightest corners, with better-defined trajectories).
Operations should begin in 2020, and according to plans the track will be in operation from October-November of the year before the Olympics, so that teams in the three sports can try it out. Stands will be built at the finish line, at the start area, and along the route. It will be the only track still operating in Italy after the Olympics, and so it is likely that it will also be used for other competitions (skeleton, luge and bobsleigh World Championships) by Italian and international teams.
Unfortunately, the history of this bobsleigh track includes a few athletes who died during their descents, in addition to one of Roger Moore’s stuntmen, who was killed there in an accident during filming.

So Cortina and its Olympic facilities had no problem in conquering even the legendary secret agent James Bond, but this was not the first time in which the ski-jump, the ice stadium, the Olympia piste and the bobsleigh track had been immortalised on film. In fact their first appearance was actually in 1956, in Vertigine Bianca (White Vertigo), the official documentary of the VII Winter Olympics, produced by Istituto Luce and still available on the official page accessible from this link.

It is a film well worth watching, recommended for everyone who likes the idea of a full immersion in Cortina’s Olympic past, while awaiting the next edition!

Take a look at the map of the locations in the film which makes it easy to find the recommended places!