Not far from Cortina, in the heart of the Dolomites, history meets art and devotion.
The origins of the small church of the Madonna della Difesa in San Vito di Cadore can be traced back to fulfilling a vow made one day in the winter of 1412, in the area beyond Podestagno castle, by the volunteer soldiers of Ampezzo and Cadore.

The terrifying news that the soldiers of Sigismund of Luxembourg were attacking the castle was not wholly unexpected, because it was clear to all that their emperor wished to travel to Rome in order to be crowned by the Pope. The volunteers from Ampezzo and San Vito di Cadore, a territory which at that time also comprised Selva di Cadore, Borca di Cadore, Vodo di Cadore, Peaio di Cadore and Vinigo di Cadore, arrived and fought courageously. But they were inferior both numerically and in military training. Before surrendering, they appealed to the Madonna, who performed a miracle. What did she do? No-one knows. But what is certain is that the invaders retreated, taking some prisoners with them! But the towns had been spared, and likewise the women and children. As soon as they could, the Confraternity of the Flagellants of Saint Vito di Cadore began work to fulfil the oath. And so they completed the part of the chapel which now forms the apse of the Madonna della Difesa church.
It is a jewel of perfection, entirely clad in frescoes. Under the vaults, scenes from the life of the Virgin; on the right-hand wall, saints Lucy, Roch and Sebastian; on the opposite wall, a large-scale composition with, at the centre, two groups of cavalry soldiers, in a procession for a tournament. Some of them have already been knocked out of their saddles; above, saint Vito in red gown, and saint Florian in the guise of a fireman. In the shadows, you can glimpse the profile of the castles of Pieve di Cadore and Podestagno. At the top, the Madonna carrying the Child in her arms and a sword in her hand completes the scene. The artist is unknown; but the composition has been dated to the early decades of the 15th century by art historian Philippe Daverio, when he visited it in 2014.
On the high altar there is a glowing triptych by Francesco Vecellio, Titian’s brother (1475-1560), with a smiling Madonna, the young Jesus, naked to symbolise a new Adam, with saints Hermagoras and Anthony the Abbot on the two sides. 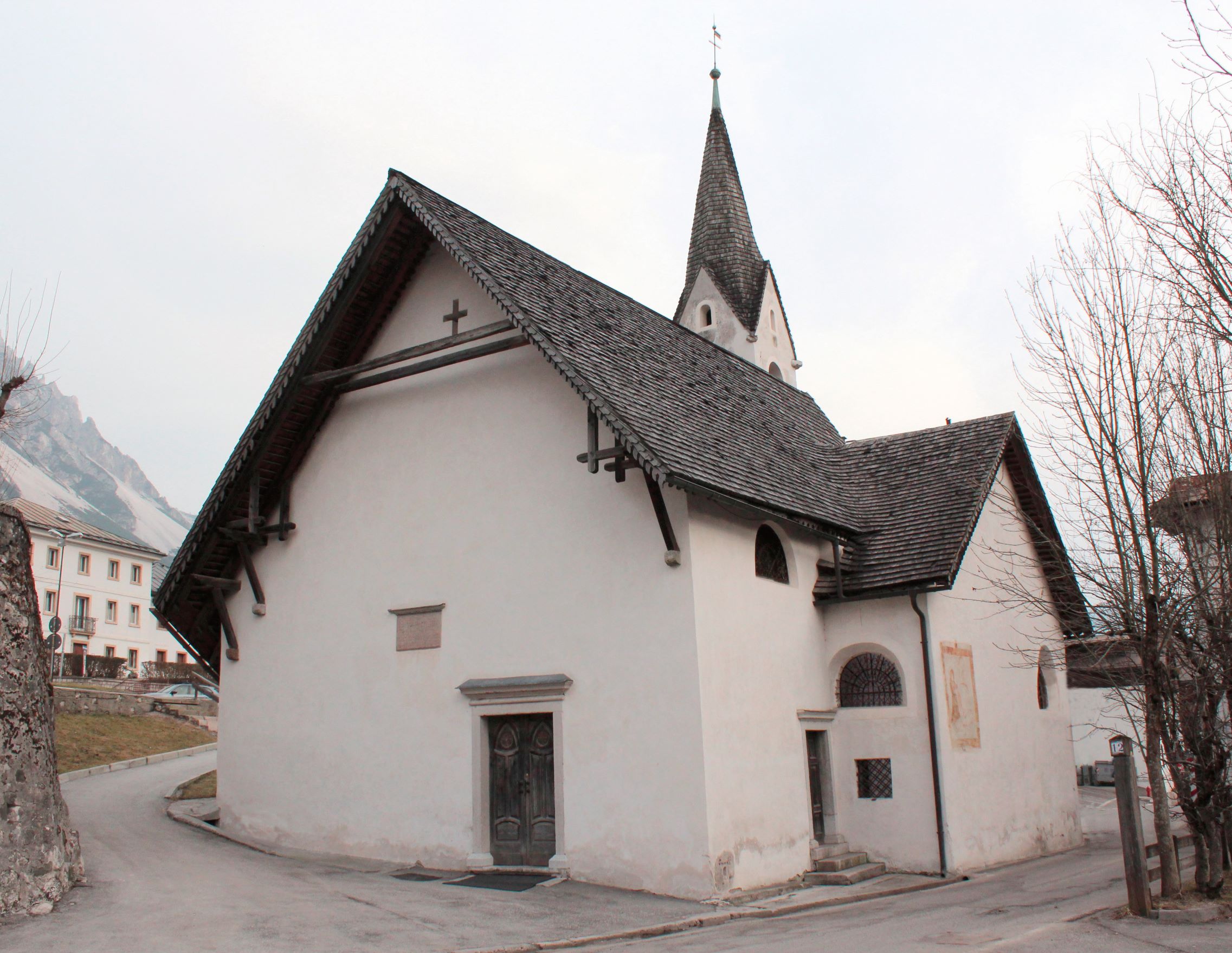 Church of Vinigo di Cadore, and visit to the town centre

Vinigo di Cadore is the oldest town in the Boite valley.
The Church of Saint John the Baptist is in Vinigo di Cadore, a town within the municipality of Vodo di Cadore, known as the “Terrace of the Dolomites” for its position which offers a breath-taking view.
The church was built in the 16th century and successively extended in the 18th. It has a simple, linear structure: there is a single nave with an adjoining presbytery in which there are as many as five altars and a vaulted ceiling.
This is classified as a national monument administered by the Venice Office for Heritage Protection, and inside it has a rich artistic and cultural heritage. 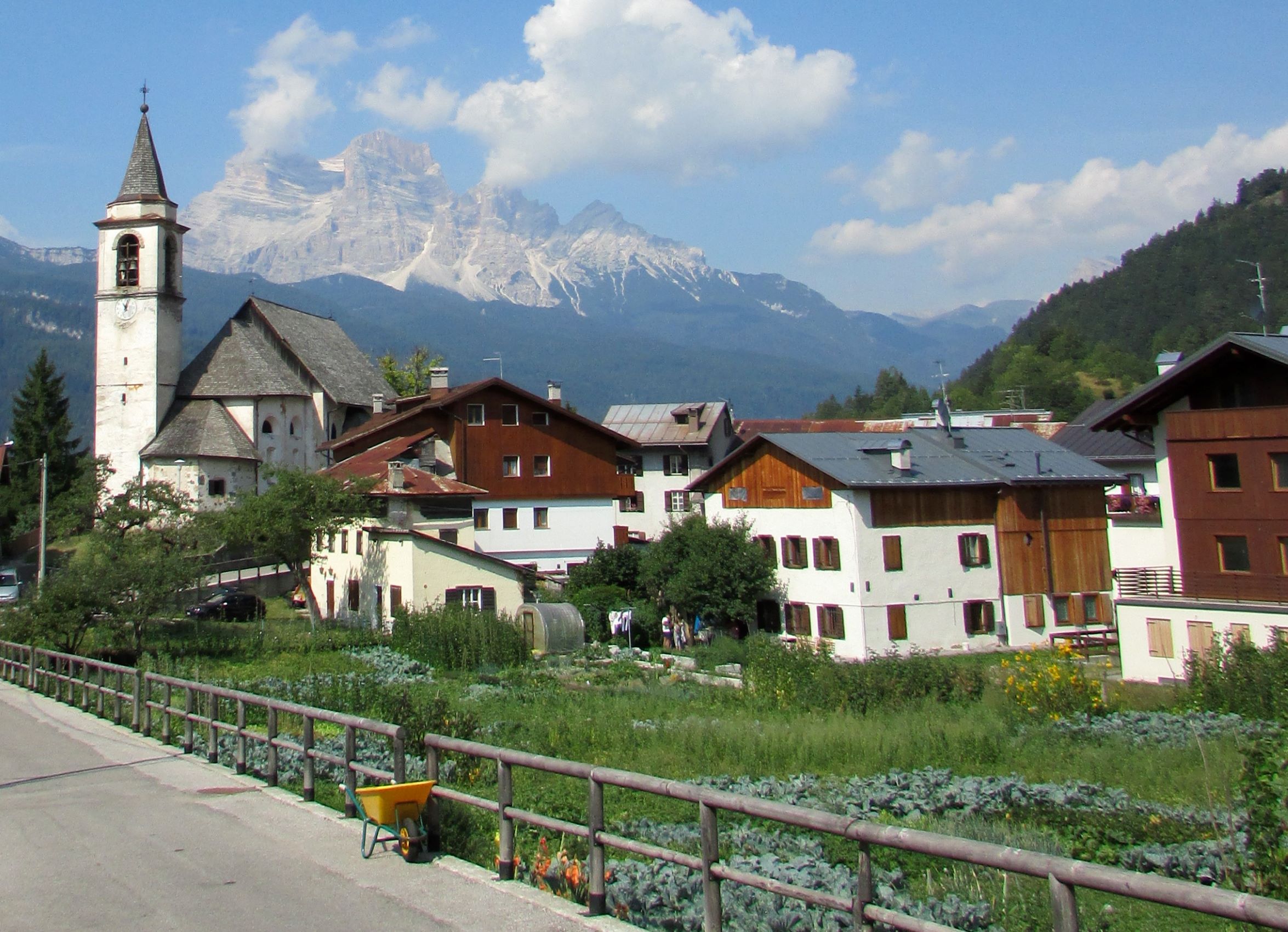 Cibiana is a municipality in the Alto Cadore area, near the Forcella Cibiana gully, a pass that divides the Cadore and Zoldo Valley areas.
It is not just a mountain village, but a true open-air museum comprising over 50 murals painted onto the façades of the old houses, and today it is known as “the town that paints its own history”.

It all began from an operation launched in 1980 by Osvaldo Da Col, president of the tourist organisation “Pro Loco”, and Vico Calabrò, a well-known local painter, with the objective of giving new life to the town and preserving the memory of past traditions. The frescoes are painted on the walls by skilful artists, not just from the Veneto region but with some arriving from all over the world, from countries including Japan and the ex-USSR. Every work created on the walls of the ancient houses was conceived with the objective of describing the location’s history, and more specifically, the story of the specific house on which it was painted.
Reinhold Messner’s Messner Dolomites Mountain Museum or “Museum in the clouds” was built on the summit of mount Rite at 2,187 m above sea level, and it is one of the most evocative museums in the Dolomites.
The museum provides a spectacular view of the Dolomite peaks: in fact, from here you can see mountains including Pelmo, Civetta, Marmolada, the Tofane group, Sorapiss, Antelao, the Marmarole and Schiara groups, Agnèr, Moiazza, Cimon della Pala, and the entire Centro Cadore area, with the Boite Valley, Cortina and the gully Forcella Cibiana. At this museum, the works on show are the Dolomitic peaks, and they are also highlights of the gallery installed inside the fort.
The museum can be reached on foot by a walk of about two hours from the Cibiana Pass, or by using the shuttle service, for which payment is required. 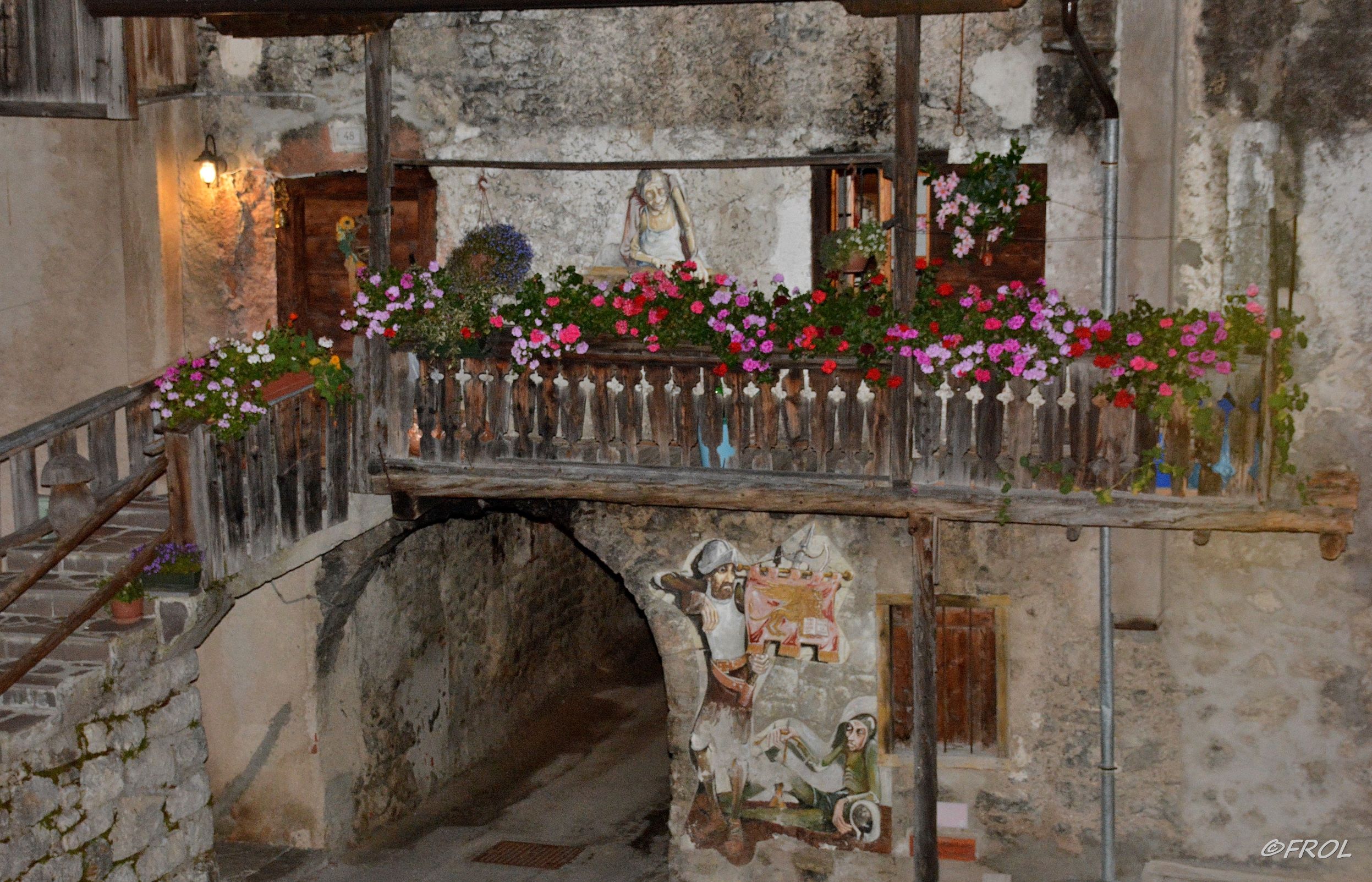 The Chapel of Saint Ursula, in the centre of Vigo di Cadore, is a valuable monument of great interest, an unparalleled artistic and architectural heritage.
Inside the building there is a single, immense fresco depicting the legend of Saint Ursula, daughter of the King of England who became a Christian, and was murdered for having refused to marry a pagan prince. 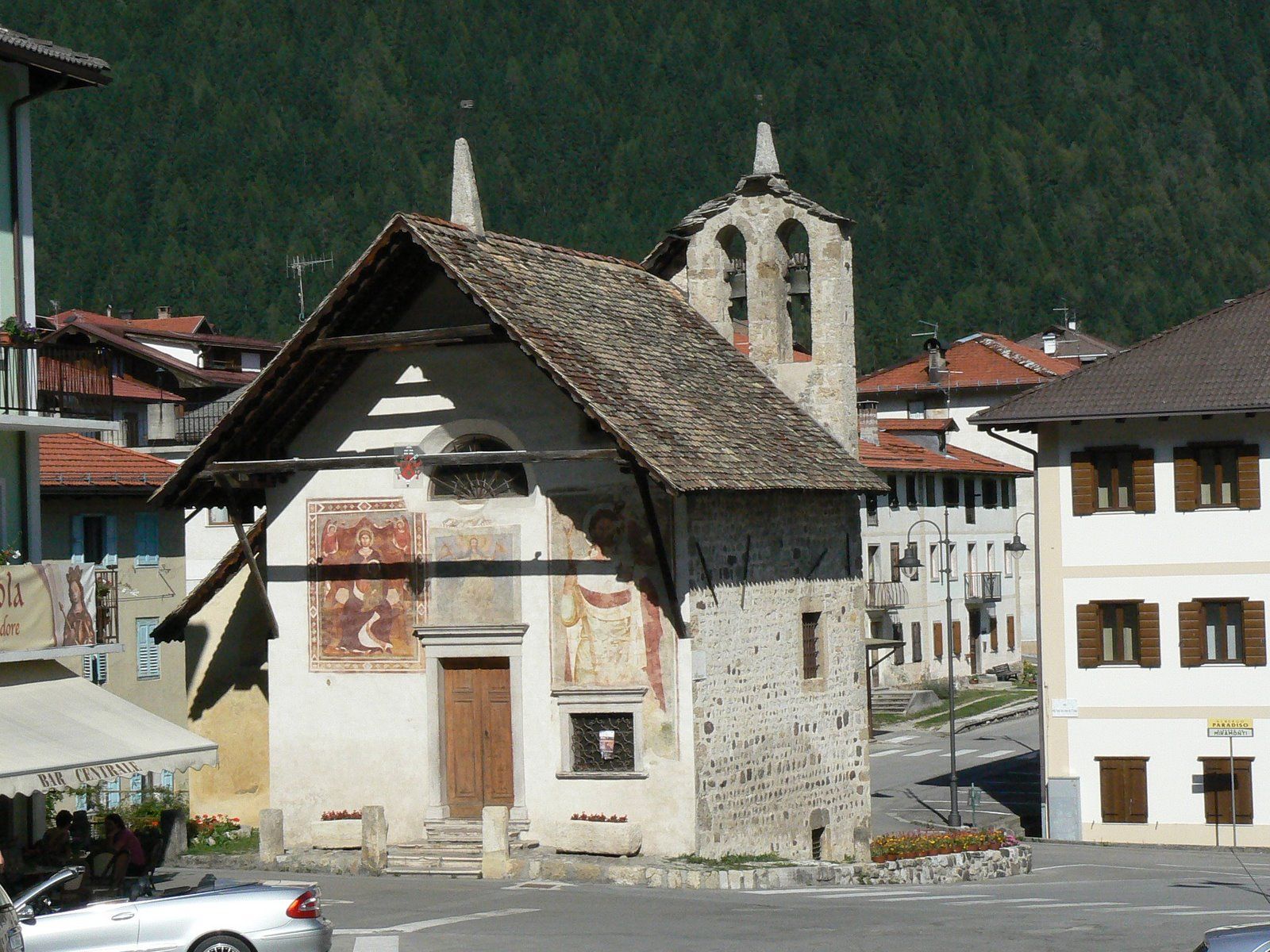 Pieve di Cadore and its museums

The historic capital of the Cadore district is best known as the birthplace of Titian: Pieve di Cadore (878 m) is the area’s administrative, economic and cultural centre.
Tiziano Vecellio was born here, and in fact the town conserves memories and works by the famous Renaissance painter. It is well worth visiting the house in which he was born, with the museum dedicated to the artist; other highlights include the famous Gran Caffè Tiziano looking onto the town’s main square, and the frescoes that are proudly preserved inside the churches.
The Palazzo della Magnifica Comunità (Palace of the Magnificent Community), dating back to 1477, is the location of the Archaeological Museum of Cadore, which presents findings from Ancient Roman times.
The Optical and Eyewear Museum in Pieve di Cadore is a prestigious structure, one of the most important of its type in the world, dedicated to the theme of eyewear, a trade that developed all over the Cadore district starting from the late 19th century. 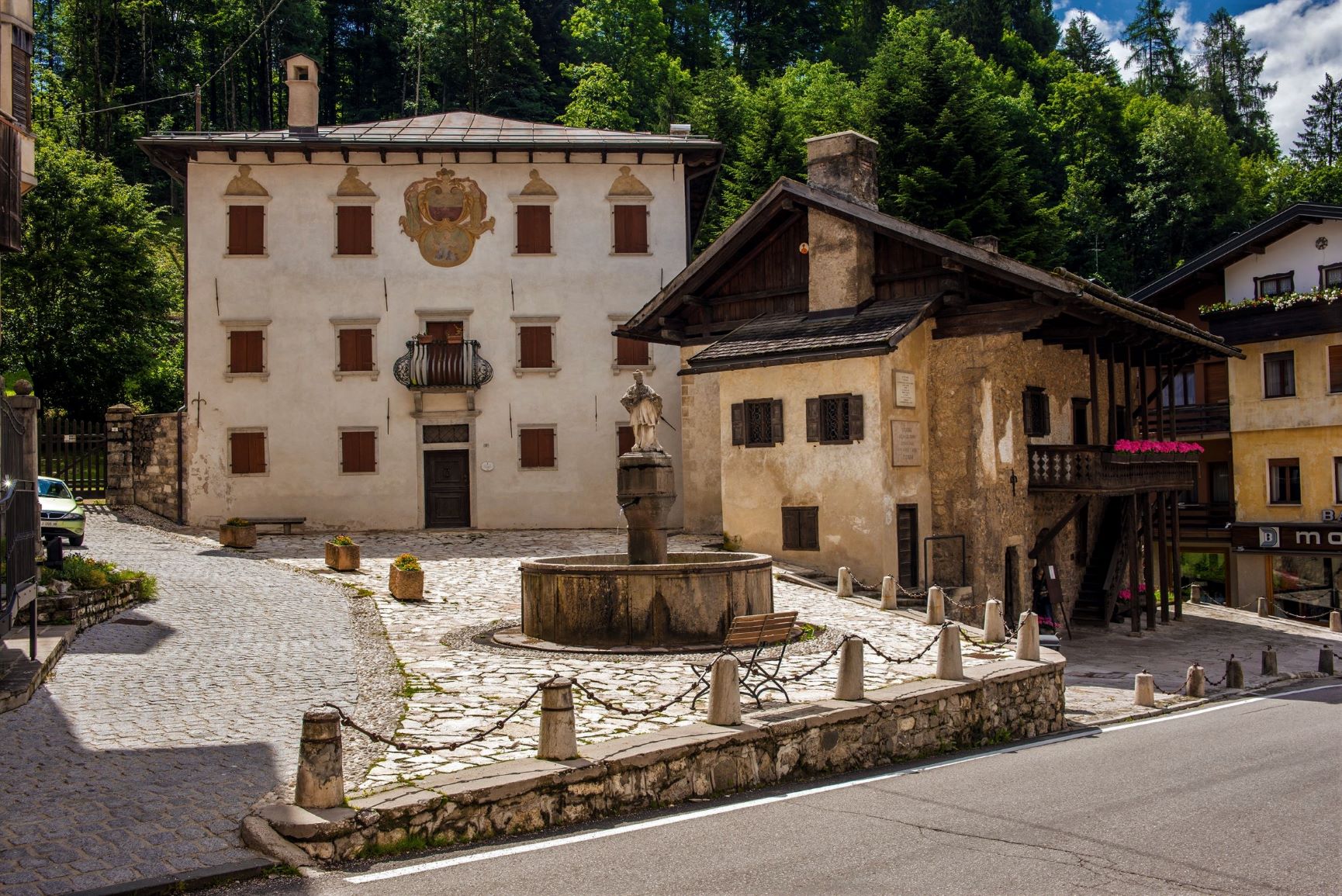 Heritage of timeless villages and haylofts
From the late 19th century, families in the Zoldo district began leaving the valley and brought the tradition of artisanal ice-cream to large Italian and international cities. In fact, when strolling on the streets of Vienna and other cities in Austria, Germany or Spain, today just as in those days, you can enjoy a delicious Zoldo ice-cream. This speciality is based on fresh, genuine, carefully-selected ingredients. Attention to the quality of raw materials and the skill in metering and processing them create a product that could be described as joy for the senses.
When you are walking in the Zoldo Valley, don’t miss a visit to the upland hamlets of Fornesighe and Coi, which still today, decades on, are hallmarked by the presence of traditional haylofts known as tabià. 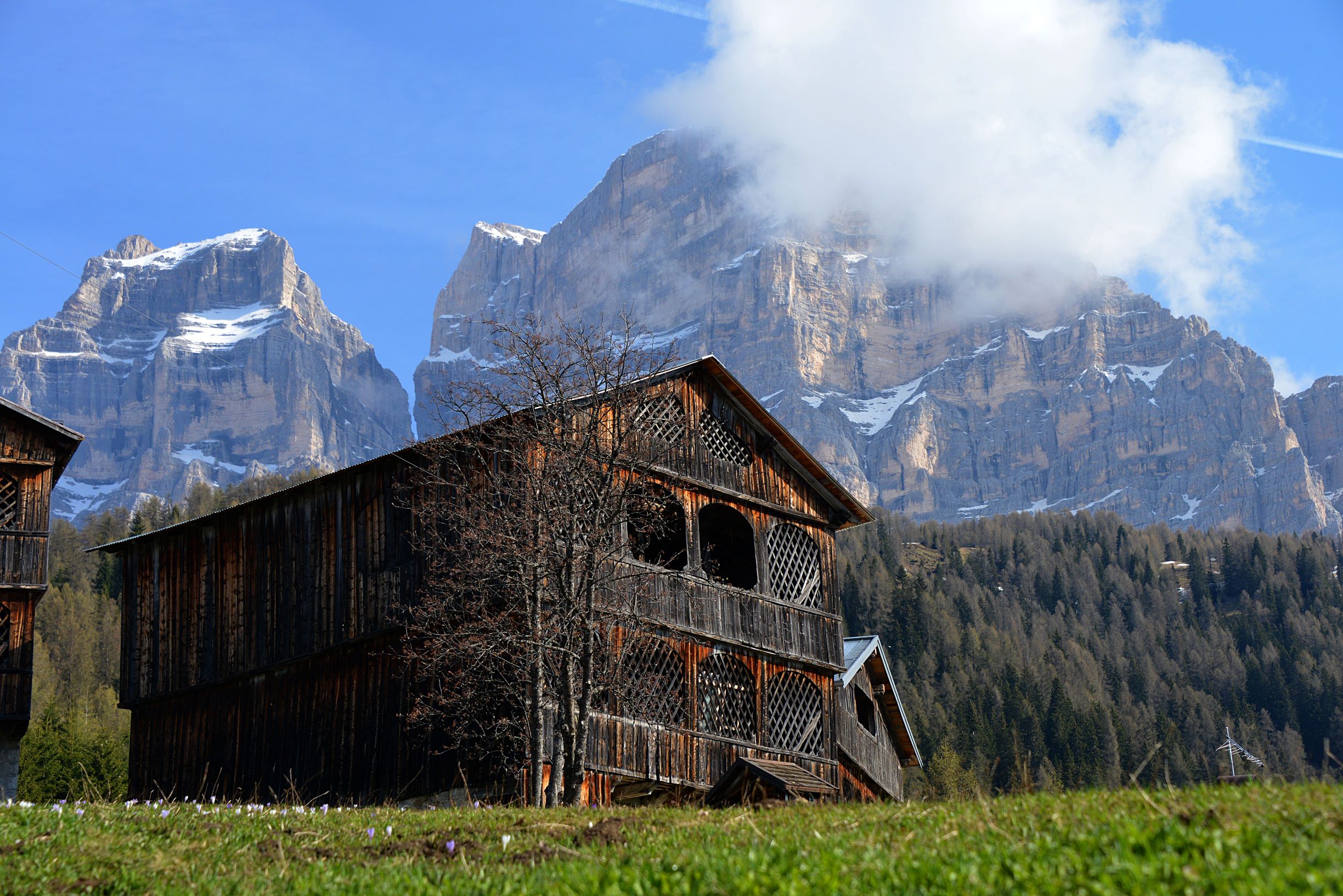