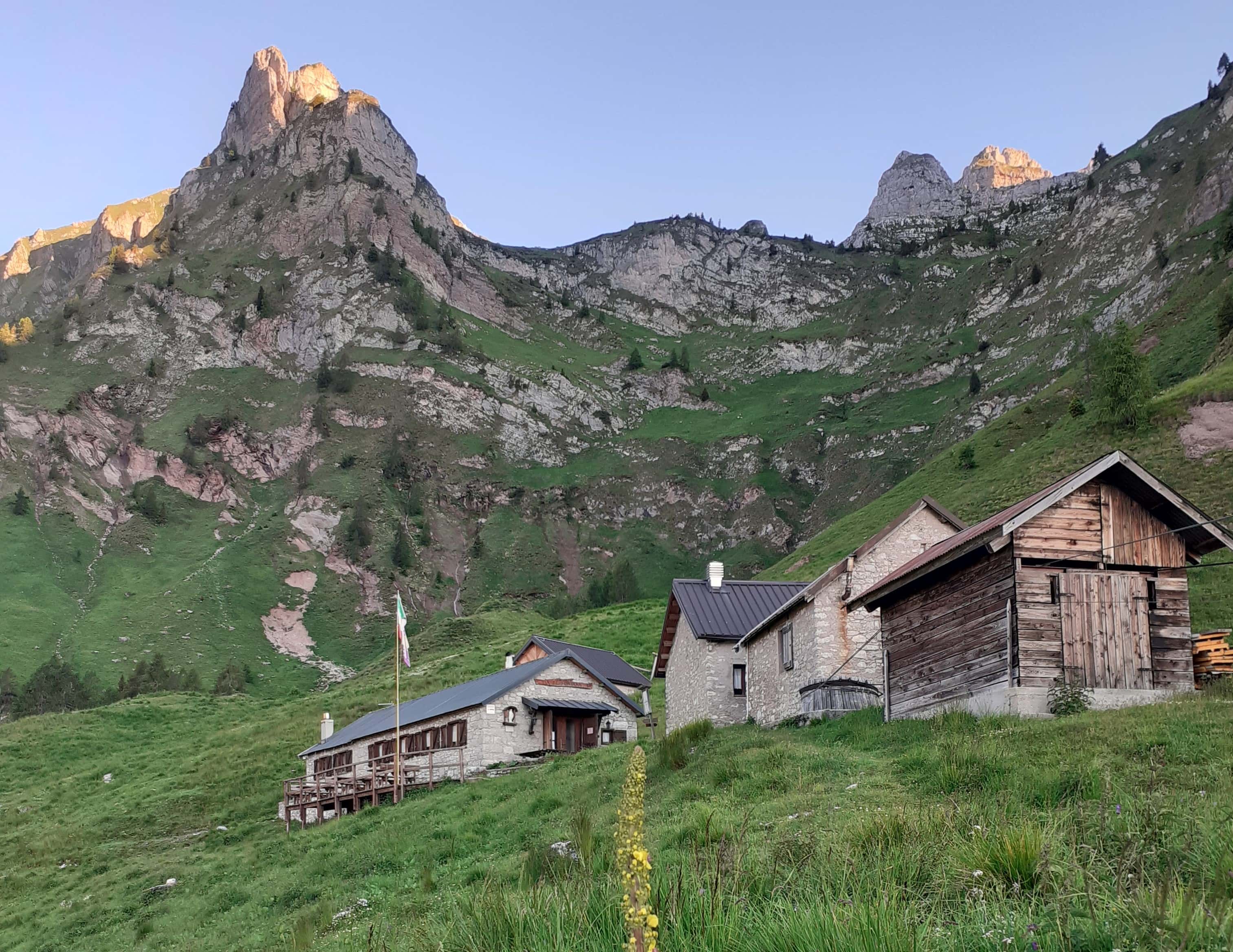 From the Rifugio Sommariva al Pramperet, cross the Pra de le Vedova back again towards east for a bit, then take the first path that breaks off to the left (south-west), marked 514. This path goes up the knolls among the mugo pines and then, higher up, cuts across the slopes of the western peak of the Balanzòle on the Pramperét side.

Once you reach a ravine with strange rock slabs and small basins (water at the bottom), the path goes up the sloping pastures to the Portèla del Piazedèl, 2097m, south of the rocks of the eastern peak of the Balanzòle.

Now proceed southwards, on the side of the Dantesque Val Clusa, and go through “I Piazedìai” with its green oases and stretches of gravel path with rock slabs, until you come to a high clearing with grassy and flower-filled areas, gravel and small early-season snowfields, called the Vant dei Piazedìai, c. 2050m.

From here, cross southwards in the direction of the green side of the Baranciòn, then go up through debris and little rocks, zigzagging up to a little saddle at 2330m, from where you can observe the grand, wild Valòn dei Erbàndoi. Go up along the crest until you come to a grassy shoulder, then to some rocky steps (not difficult) from where a good, flat track cuts through the scree and reaches the Forcella Sud dei Van de Città, c.2395m. An imposing view opens out over the Van de Città, high moon-like basins of a strange, harsh beauty; surely one of the most romantic places in the mountains. Le Presòn (= the Prison) - so called because of some “cells” hollowed out into the rock - separates the “Van de Città (Zità) de entro” from the “Van de Città de fòra” ; the Alta Via goes through the Van de fòra.

From the saddle, go down sparse pastureland and easy slabs until the bottom of the Van, under the Forcella de Erbàndoi, then go down a first step until you reach the underlying ravine, which you cross to the north-east until a grassy crag at 2030m, under Le Presòn.

Through harsh surroundings, rich in all kinds of flora, go down steep grassy cliffs (be careful if they are wet), until the underlying Rifugio Pian de Fontana and the Bivacco “Renzo Dal Mas” next to it, 1632m.

The Rifugio Pian de Fontana is located where there used to be an old shepherds’ hut, built in 1935. The refuge was built in 1993 and the bivouac in 1975, from a rural building next to the refuge. It is owned by the Longarone Section of the CAI. It is open from mid-June to end-September.