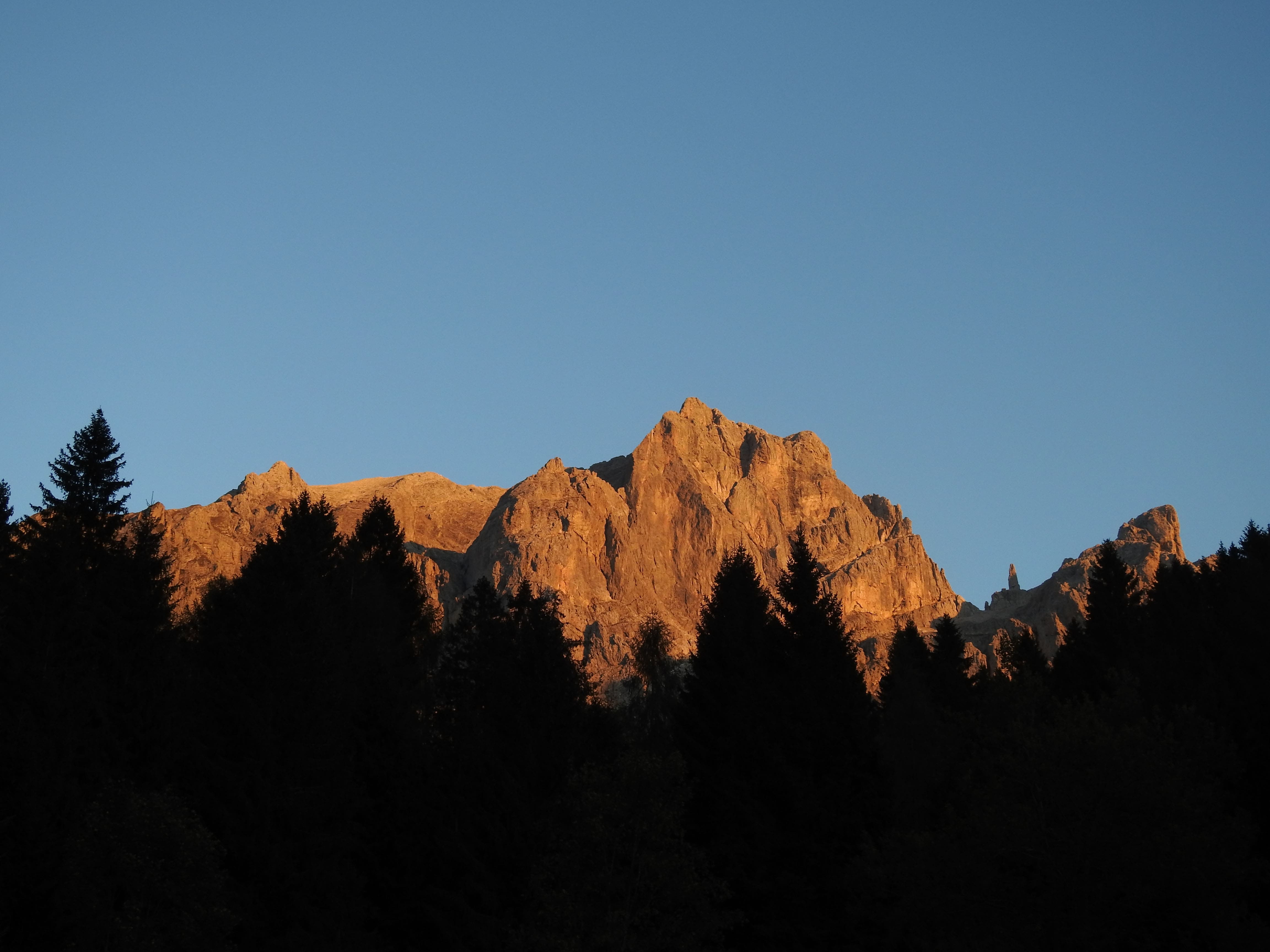 From the Rifugio Pian de Fontana, go south on path 514, cross the pasture and go to the col at 1592m, then zigzag rapidly down the wooded mountainside until you come to a fork at about 1500m. Path 520 goes down to the south, then the east, through the Val de Ross, while the 514 continues to the west and then to the south-east. Follow the 514, going immediately up to the south-west and then crossing south along the side of the mountain, zigzagging until you reach the steep edge where the Forcella la Varetta, 1704m, looks out onto a charming basin full of flowers and overlooked by the red crags of the Talvèna.

Opposite you can see the superb Schiara. Not far away is the Casèra La Varetta, 1709m, that can offer basic shelter if need be. Water nearby.

Now the excellent path cuts across the head of the Val Vescovà at altitude, passing beneath the Cima della Scala, above the crags, then zigzags steeply down to a fork where the 514 meets the 518, which comes from the Rifugio Bianchet (see Variant).

If you want to continue on to the Bivacco del Màrmol, follow path 514 which goes south, slightly uphill, to the Casonèt de Nerville, 1641m (a modest emergency shelter). From the Casonèt, go up the head of the valley towards the Forcella de Nerville (but don’t go as far as the Forcella), meeting a boulder with an old shepherds’ hut. Then go into the ravine, that is the base of the gully which goes down to the north, from the Forcella del Màrmol, between Schiara and Pelf.

Across karstic terraces you go into the gully which, further up, presents rock leaps (not difficult), and some patches of snow. Finally you reach the Forcella del Màrmol, 2262m, immersed in harsh, wild surroundings. From here an icy gorge goes down to the north: it must be avoided at all costs, inviting as it may appear. From the saddle, go slightly upwards to the right across rocks, following the good signs and, after a few little couloirs, go a little to the left and tackle a chimney.

Now you are about 60 metres above the saddle and you must follow an equipped ledge to the left, then some chimneys, until, at a fork, you will see the signs for the climb to the peak of the Schiara.

From the fork (be careful in case of fog or snow), go down the Belluno side through rocks and grass until the edge of a large fissure with snow on the bottom. From here, stretches of rock equipped with fixed ropes will soon take you to the Bivacco del Màrmol “Sandro Bocco”, 2266m.

The Bivacco del Marmol, owned by the Dolo Section of the CAI, was set up in 1968 and is dedicated to a member of the Alpine Regiment killed in action. It has 9 bunks; always open and unstaffed; water nearby, five minutes in the direction of the via ferrata. From the nearby eastern crest of the Schiara there is a magnificent view.

The bivouac offers the extraordinary opportunity to climb the peak of the Schiara, 2565m, in the morning, and enjoy one of the best views in the Dolomites. The climb takes about an hour, and there are some exposed stretches, not particularly difficult from a mountaineering point of view. From the peak of the Schiara you can descend in four ways :

From the Rifugio Pian de Fontana to the Rifugio Bianchet, the Val Vescovà and the SS Agordino Road: From the Rifugio Pian de Fontana until the fork where paths 514 and 518 meet, i.e. just before the Casonét de Nerville, as for Day Eleven. Then you take path 518, which takes off to the right (south-west), around an altitude of 1600m, and goes steeply down into the Val Vescovà, Initially down a steep wooded mountainside, then a grassy basin surrounded by high crags which form the head of the valley. After the dry bed of a torrent and a grassy area, the path becomes good, goes through the wood and continues under the ruins of the Casèra della Valle, 1396m. It then comes out onto a field, crosses a little valley and soon reaches the Pian dei Gatt with the Rifugio “Furio Bianchet”, 1245m. The Rifugio Bianchet is located in the beautiful clearing of the Pian dei Gatt, with the imposing walls of the Schiara and the charming Gusèla del Vescovà in the background. It is run by the Belluno Section of the CAI. It is open from early June to end-September. It offers basic hotel services and sleeps 40, plus 6 in the winter shelter. Water inside; toilets with hot water and shower. CNSAS “118” Rescue Station. Telephone +39 0437 66 92 26 - 335 6446975; rifugiobianchet@hotmail.com. From the refuge, take the dirt-track road through the forest, marked 503, which goes west - initially fairly straight, then with several bends - along the wooded Val Vescovà, until it reaches the SS203 Agordino road, at the locality of Pinèi, 486m. With this variant, you can conclude, in just eleven days, your adventure on the Alta Via delle Dolomiti n.1