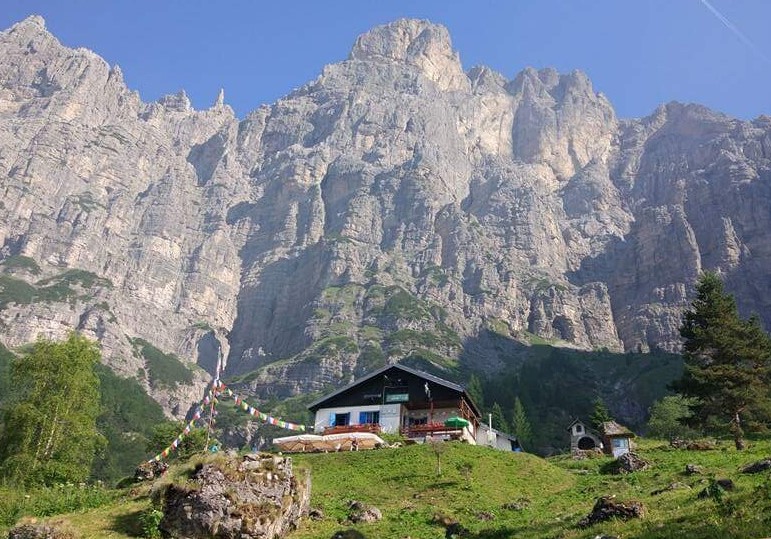 From the Bivacco del Marmol, the simplest and most logical way to get down to the Rifugio 7° Alpini is to go via the Ferrata del Marmol. As with all other via ferratas, intelligence, determination and common sense are essential, especially in foggy, rainy and snowy weather, which can happen even in the middle of summer. The ferrata, which must not be underestimated (remember it is a rocky route with a gradient of 500 metres, in a harsh environment), is however safe, well maintained and well marked.

Be aware that the refuge is at least two and a half hours from the bivouac (best to take into account three hours), and is not to be taken lightly even in ideal conditions. In any case, Variant 7 remains a valid shortcut, but it is best to decide beforehand, without reaching the bivouac and from retracing your steps.

From the bivouac, turn right (west), along a grassy ledge, then in a corridor with a fixed rope followed by a little hanging garden. Keep following the fixed ropes, go down a few chimneys (ladders; exposed) and you will come to a little saddle. Nearby there is water in a cave.

The surroundings are spectacular, dominated by the yellow walls of the Schiara. Avoid a gorge, keeping to the left (east) over scree and little steps (equipped). Once you reach a ladder, you will land on a grassy slope: here you descend for a bit, then go right, and you will meet three ladders in succession (exposed stretch), which take you to the bottom of the deep gorge (at the beginning of the season there is still snow).

After a narrow ledge, you go onto the Ferrata Zacchi on the south wall of the Schiara. Go down it (it is well equipped where necessary, there are some exposed stretches). Once into a deep gorge, you will find water and a marvellous view. Then you will suddenly find yourself at the end of the wall, right at the base, on grass, next to the characteristic, monumental Portón, at about 1780m. From the base, in about an half an hour of descent down well marked grassy rock formations, you reach the Rifugio 7° Alpini, with the Capanna Bivacco “Severini Lussato” next to it.

The Rifugio 7° Alpini was built at the Pis Pilòn in 1951 and renovated in 1970-75, while the nearby Lussato shelter dates from 1967, built on the remains of an old shepherds’ hut. It is owned by the Belluno Section of the CAI. It is open from mid-June to mid-September. It offers basic hotel services and sleeps 58, plus 5 in the winter shelter. Water inside; inside and outside toilets, hot water and shower; lighting with generator and solar power system. CNSAS “118” Rescue Station. Telephone +39 0437 94 16 31, website www.rifugiosettimoalpini.it; email: infosettimoalpini@gmail.com.

The “Severino Lussato” hut-bivouac, dedicated to a mountaineer from Belluno who was killed on the Tofàne, is an unstaffed shelter which can be used when the refuge is closed, or full.

From the Rifugio 7°Alpini, go down the col, known as Il Calvario or Col de le Silimandre, across the grassy rock plate along path 501, to the south, until you reach the romantic, solitary Val d’Ardo, deeply recessed, rich in woodland, craggy, cut across by a torrent which forms several emerald cascades: here, peace reigns. When you reach the Mariano basin, 681m, cross a bridge and take the wide mule-track, high above the Ardo, which goes up a bit to an altitude of 770m, then goes gently down to the Case Bortòt, 707m, where the valley opens out.

Those who would like to continue on foot for the gentle green cliffs, will have to go down the asphalt road, reach the bridge of Cargadór, 478 m, go back to the hamlet of Giòz, 525 m, then to that of Conzago, 541 m, and then descend gently until you reach Bolzano Bellunese, 498 m, where you will find refreshments and accommodation points in the peaceful rolling hills of Belluno.

From Bolzano Bellunese, you can reach Belluno by taxi, hitchhiking or public transport. If you are still determined to continue on foot, follow the road which goes down through pleasant fields until you make your “triumphal” entrance into the capital of the Dolomites: Belluno, 389m, where the Alta Via delle Dolomiti n.1 comes to an end.

The Province of Belluno hosts 70% of the Dolomite mountains, and truly merits the definition of capital of the Dolomites. The city is beautiful, bright, industrious and hospitable. The old part of the city has several splendid monuments which range from Pre-Roman and Roman to medieval and Renaissance, all of which are surrounded by beautiful squares and large gardens.

The historical centre can easily be visited in a few hours, perhaps at the end of your hike, when everything appears more beautiful and interesting. Well worth a visit is the beautiful Piazza del Duomo (Cathedral Square), with the splendid Palazzo dei Rettori (Rectors’ Palace), which dates from the 15th century and today houses the Prefecture – a veritable jewel of refined art.

Then there is the Municipio (Town Hall), in Veneto style, and the cathedral with its noteworthy Baroque belltower, deaigned by Juvarra, 68 metres high and completed in 1743. Also interesting is the Museo Civico (Municipal Museum), in the same square, which contains interesting Roman and Pre-Roman relics, important paintings, sculptures and engravings, and local historical relics from various eras.

Another charming spot is the Piazza del Mercato (Market Square), the most characteristic medieval and Renaissance corner of Belluno, with a typical Belluno-style fountain and the nearby Porta Dojona (Dojona Gate). The Chiesa di Santo Stefano (St. Stephen’s Church) is one of the most important monuments in the city, a fine example of Italian Gothic architecture, completed in 1486, with the Roman sarcophagus of Flavio Ostilio at the side, bearing the motto “Ricordati sempre dei monti” (Always remember the mountains).

The heart of the city is the grand “Piazza dei Martiri” (Martyrs’ Square), where the locals enjoy an evening stroll alongside beautiful, well-maintained gardens.