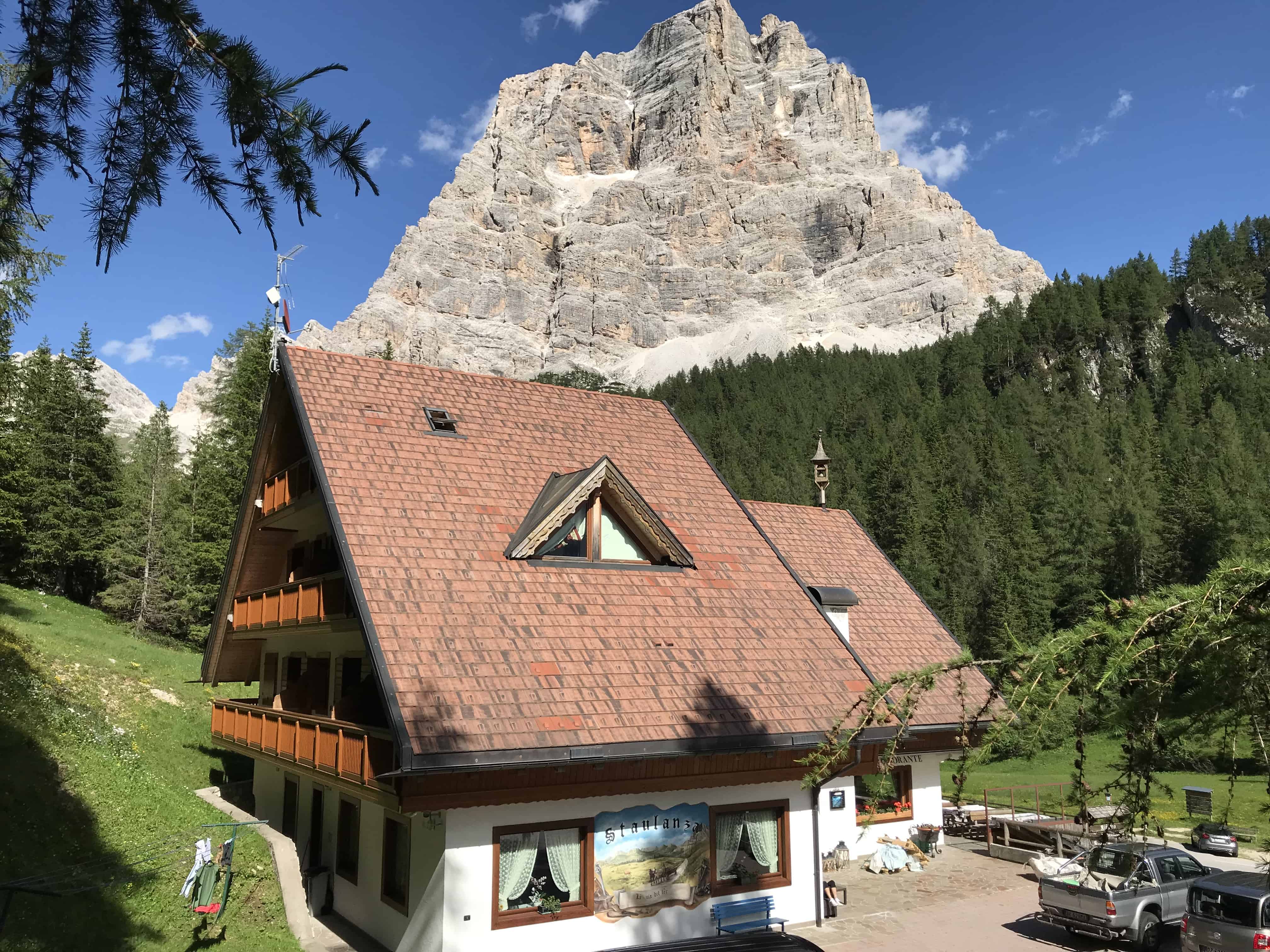 From the Rifugio Città di Fiume, follow the comfortable mule-track marked 480 to the south, which will soon take you to the Forcella Foràda (Foràta, on the map), 1977m. Leave the mule-track, which continues north-east for the Val de Foràda, and go southwards, still on the 480, on the “Gino Flaibani Path, which allows you to cross, and thus also to “circumnavigate” the massif of the Pelmo. Go back on to the south-east and go up a steep gorge, follow sparse pastures at altitude and go down a little until you reach a grassy spur which originates from the Cima Foràda. On the right, the wild Circo di Val d’Arcia opens out; until just a few years ago it contained a small glacier. From here, you should climb up the unstable cirque (with a splendid view over the superb northern walls of the Pelmo) and a final effort will take you to the Forcella di Val d’Arcia, 2476m, a little window on the great Cadore area.

From the saddle, go down on the right, cross two imposing gravelly gorges and follow the good tracks to a large, clearly visible pass with a large rock spur. From the pass, descend diagonally down the huge stream of scree which comes down from the Forca Rossa, pass near the beginning of the Cengia di Ball (normal route for the peak of the Pelmo) and, continuing in a southerly direction, you reach the Rifugio Venezia “Albamaria De Luca”, 1946m.

The Rifugio Venezia is an excellent stop-off point for those who wish to extend by one day their Alta Via trip, or extend by a couple of hours the easy, amazing next stage. The hut is situated on a hill at the Sella (or Passo) di Ruturto, 1931m, in an enviable position that offers fabulous views over the nearby Cadore Dolomites and at the base of the superb north-east pillar of the Pelmo. Departure point for the Cengia di Ball and the peak of the Pelmo. Owned by the Venice Section of the CAI, the refuge was built in 1892 and renovated in 1954. Open from mid-June to mid-September, it offers basic, friendly hotel services. Sleeps 62, plus 10 in the winter shelter. Inside bathroom services with hot water and shower; lighting with generator and solar power system; CNSAS 118 Rescue station. Tel : +39 0436 9684, email: rifugiovenezia@libero.it.

From the refuge a moderate climb southwards on path n.472 will soon take you to the Sella di Ruturto. From here, continue to the south-west, with an easy traverse under the imposing walls of the southern shoulder of the Pelmo until the Lac (Lach), where the Val de Cuna and the Costàuta meet at an altitude of c. 1968m. Now turn west, pass at the southern base of the imposing Pelmetto in the locality of Le Mandre, and you will come close to the Col delle Crepe Cavaliere, where path 472 continues for the Passo Staulanza. Take path 474 to the left, on marshy ground, which just afterwards turns decisively to the south-west and goes down the Val del Ru Bianco until it ends up onto the SS251 road at Palafavèra, 1507m (Pala Favera, on the map), where you can find a few hotels/mountain huts and a campsite.

At Palfavèra the Rifugio Monte Pelmo, temporarily closed, is equipped with 4 beds and offers basic, friendly hotel services. Tel: +39 0437 78 93 59. The Rifugio Palafavèra, which is a little bigger, is open from June to end-September and in the winter season; it has 25 beds and offers hotel services. Tel +39 0437 78 91 33 ; email: info@palafavera.com; website: www.palafavera.com

VARIANT 1 - From the Rifugio Città di Fiume to the Passo Staulanza: If for any reason you wish to end your Alta Via trip at the Rifugio Città del Fiume, or if you prefer not to risk going round the Pelmo through the Forcella Val d’Arcia and the Flaibani Path, you can take path n.472 from the mountain hut (but also the road which goes via Malga Fiorentina, 1799m), and in an hour and a half, after skirting the scree of the large basin of the Val d’Arcia, you will arrive to the Passo Staulanza, 1766m, on the SS251 road. Refreshment available in the Rifugio Passo Staulanza, open from mid-June to end-September (sleeps 50; Tel. +39 338 7900120; +39 0437 788709; email info@staulanza.it; website www.staulanza.it). Palafavèra is just over 4km south from here and can be reached by the SS251 road. VARIANT 2 - From the Rifugio Fiume to the Rifugio Venezia and Palafavèra: Reach the Passo Staulanza (as for variant 1 in 1,30 hours). From the pass, keep on the 472 (Anello Zoldano), pass the Col delle Crepe Cavaliere and, via the Triól dei Cavai (Horses’ Path) and the Sella di Ruturto, you reach the Rifugio Venezia, 1946m. From here, retracing your steps, you will reach Palafavèra in 2 hours, as described in Day Six. VARIANT 3 - From the Rifugio Fiume to the Rifugio Coldài via the Casèra Bèla Mont or Vescovà and Pioda: Reach the Passo Staulanza (as for Variant 1; 1,30 hours) From the pass, follow the SS251 road south-west for about 750m until you come to a fork on the right, from where a little road takes off, marked 568. Follow it until the fork at an altitude of c.1700m. The right branch (west) continues towards the Casèra Fontanafredda. Take the left branch (south-west), which goes to the Casèra Monte Bòi Vescovà or Bela Mont 1722m (refreshment), an hour from the Staulanza. After you leave the road, follow path n.561 (Anello Zoldano) to the south-west, then south-east until you get back onto a little road at an altitude of 1885m. From here, about 400 metres further on, a path takes off to the right (west) and leads to the Forcella di Alleghe, 1816m, and to the nearby Casèra di Pioda; about one hour from the Casèra Vescovà. From Pioda, take the good mule-track marked 556 and in less than an hour you will reach the Rifugio Coldài, 2132m.