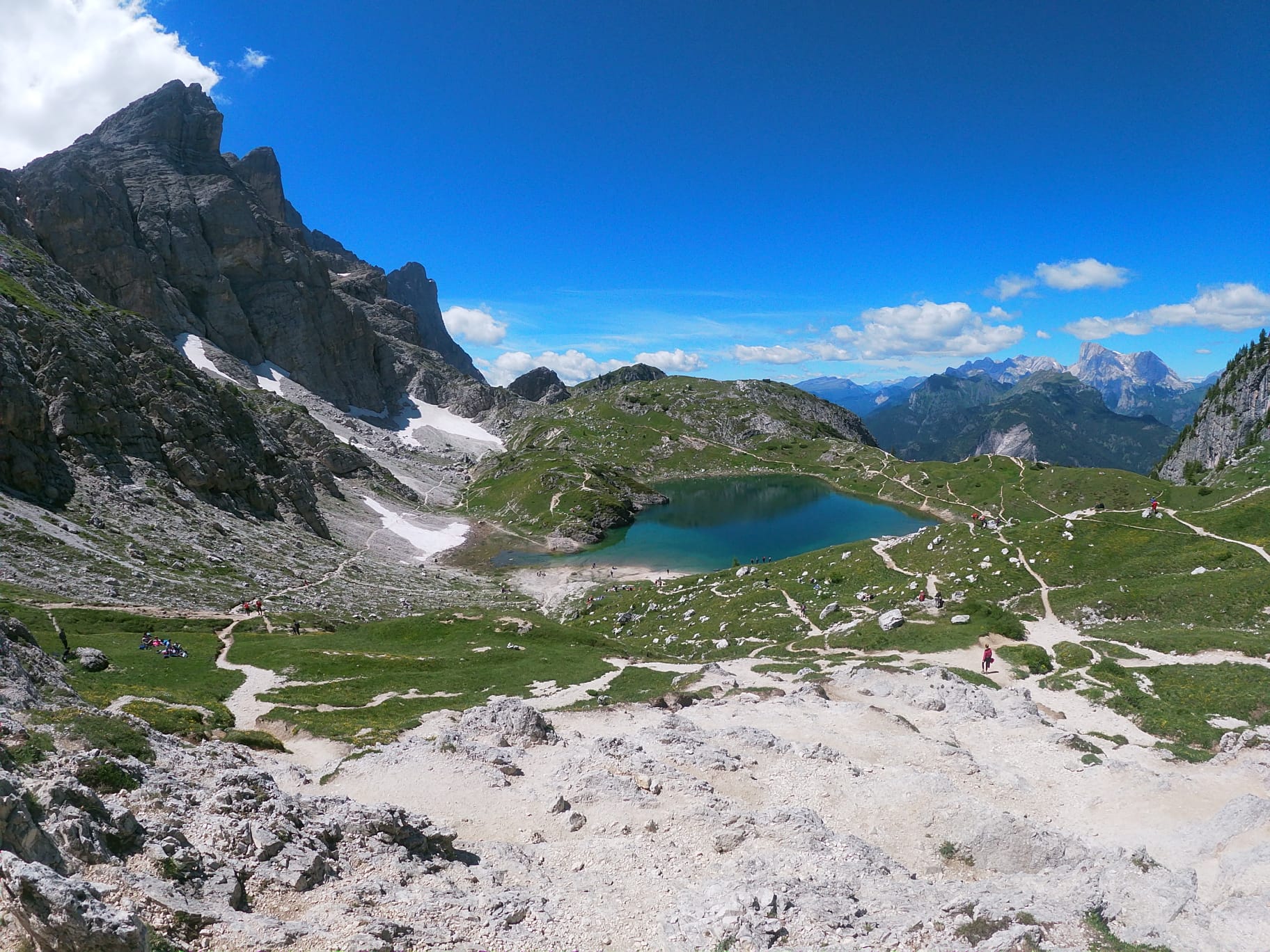 From the SS251 road, after the Palafavèra Campsite, a little military road marked 564 (closed to cars) branches off to the west and leads to the Casèra di Pioda. From here, follow the good mule-track marked 556 which goes up the wide, sparse grazing land to the Rifugio “Adolfo Sonino” at Coldài, 2123m.

The Rifugio Sonino al Coldài, built in 1911 and renovated in 1999, lies on the northern edge of the grand Civetta Group, at the head of the Ziolère Valley, near the Forcella (saddle) Coldài. It is owned by the Venice Section of the CAI, and is open from mid-June to mid-September. Basic hotel services, sleeps 93, plus 8 in the winter shelter. Inside toilets with hot water and shower; lighting with generator and solar power system, CNSAS 118 Rescue Station. Tel: +39 0437 78 91 60; email: infocoldai@gmail.com

At the Rifugio Sonino al Coldài begins one of the most majestic stretches of the Alta Via n.1; it is not particularly tiring and presents no difficulties, and it includes the opportunity to see the great northern wall of the Civetta, the “Wall of Walls”, the Wand der Wände, as it is called by the Germans, who are great lovers of this mountain.

From the refuge, you go up in a short time to the Forcella Coldài, 2191m, and descend the opposite side down the gravelly basin right on to the banks of the pretty Lake Coldài, 2143m, which reflects the steep rock walls above.

Going round the west bank of the lake you go up to the Forcella di Col Negro, 2203m, from where there is a magnificent view of the Torre d’Alleghe and the peak of the Civetta.

Now the path goes down a little into the actual Val Civetta, ignoring the traces that lead in the direction of the walls which are clearly visible from here, superb and striking. Then, from the hollow at 2030m, the path goes up again to the wide Forcella del Col Reàn, 2107m. Just before the saddle, path n.563 takes off to the right (north-west) and leads, after a brief climb, to the Rifugio “Attilio Tissi”, 2250m, almost at the top of the Col Reàn, from where there is an incomparable view over the Alleghe Lake to the north-west and the huge Civetta to the east.

The Rifugio Tissi is named after the excellent mountaineer and politician from Belluno and is owned by the Belluno Section of the CAI. It was built almost at the top of the Col Reàn in 1963 and extended in 1986. It is open from mid-June to mid-September, offers basic hotel services and sleeps 49, plus 6 in the winter shelter. Toilets and hot shower (for a fee); wifi connection; lighting with generator and solar power system; it is recommended to bring cash, as it is not always possible to pay with credit/debit card; CNSAS 118 Rescue Station. Tel : +39 0437 72 16 44; rifugio.tissi@gmail.com.

From the Tissi it is best to go back to the Forcella Col de Reàn and take path n. 560 which descends firstly towards the south-west and then to the south towards the picturesque Pian de la Lora, passing by what is left of the Casòn de Col Reàn, 1895m, dominated by the gigantic rock barriers of the Cima De Gasperi, Su Alto and Terranova. Going easily up, you reach the Sella di Pelsa, 1914m, with a charming view over the Cantoni di Pelsa, huge needle-shaped dolomite rocks. The splendid walk continues across the Pian di Pelsa under the western side of the Torre Venezia, then it descends  near the nearby green grazing land of the Case Faretti, from where you enter a little road which runs under the imposing south wall of the Torre Venezia.

Lastly, you cross a dense forest and suddenly find yourself in the peaceful oasis where the Rifugio “Mario Vazzolèr” is situated, 1714m.

The Rifugio Vazzolèr, owned by the Conegliano Veneto Section of the CAI, was built in 1929 and renovated in 1992. It is open from mid-June to early October (depending on the weather); offers basic hotel services and sleeps 80, plus 10 in the winter shelter (available when the hut is closed). Electricity. Outside and inside toilets, hot water and shower (for a fee); CNSAS 118 Rescue Station. Tel: +39 0437 66 00 08; email: rifugiovazzoler@gmail.com; website: www.rifugiovazzoler.com