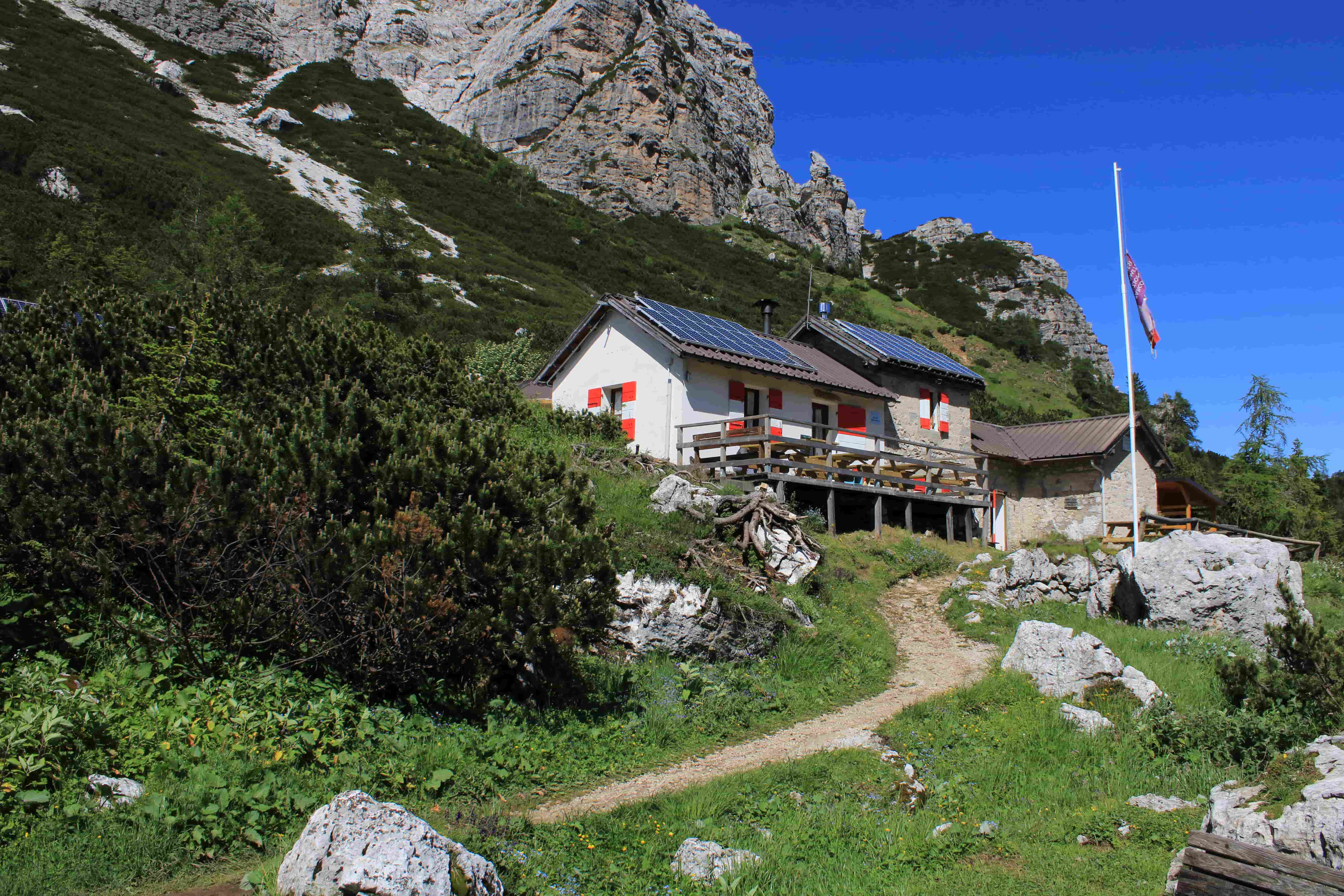 From the Rifugio Carestiato, continue on the little road marked n.549, first steeply north, then easily south and east. Cross the beautiful fields with gentle ups and downs, leave the road and take to the south east the path that goes decisively down towards the Passo Duràn, 1601m, which you will reach in about 45 minutes from the Rifugio Carestiato.

The Rifugio Passo Duràn “Cesare Tomé” is located right on the pass. It is open from beginning of June to end September, and on festive days in May and October. It offers basic hotel services with local cooking and sleeps 22; no winter shelter; electricity; wifi connection. Toilets and shower. Tel: +39 3464165461 e +39 3481030648; website: www.rifugiopassoduran.it; email: info@rifugiopassoduran.it/vittoria.dotorei@gmail.com

From the Passo Duràn, go along the SS347 to the south, i.e. towards the Agordino area, for just over one and a half kilometres, until the wide bend on the road at Ponte sul Ru de Calèda, c. 1500m, 20 minutes from the pass. From here you can look up and see the imposing towered bulk of the Sass de Calèda.

Leave the SS347 road and take path n.543 to the south, which shortly after goes up to the Forcella Dagarèi, 1620m, from where the path continues south-east, keeping at an average altitude between 1600 and 1700m. Beneath the Tàmmer Grande, you meet path n.594 which comes from the Casèra de la Rova. Continue on the 543 which now goes southwards and climbs moderately up until it meets path 544 which also comes from the Casèra de la Rova, at an altitude of about 1770m. Keep to path n.543, which runs southeastwards, go past the beginning of the path n.542 of the Valle Ru and go on to the Malga (or Casèra) del Moschesìn, 1800m (a reasonable shelter option in case of necessity) and then, uphill, to the Forcella del Moschesìn, 1940m, which looks out onto the harsh Val Prampèr:remains of a small barracks.

Once you come down the saddle, after a few zigzags, take the Sentiero (path) de le Balanzòle to the right (east), which runs beneath the peak of the same name, at the edge of the scree, with gentle ups and downs, until you reach the ample grassy shelf of the Pra de la Vedova and the romantic Rifugio Sommariva al Pramperét, 1857m.

The Rifugio Sommariva al Pramperét is the property of the Oderzo Section of the CAI. The original structure dates back to 1923, and it was renovated in 1995. The beautiful, peaceful setting, the friendliness of the owner and the fine cooking make it a place to remember. It is open from 20th June to 20th September. It offers basic hotel services and sleeps 25 plus 5 in the winter shelter. Lighting with a generator. Inside toilets with shower. CNSAS 118 Rescue station. Tel: +39 0437 1956153; email: info@rifugiosommarivaalpramperet.it; sito: www.rifugiosommarivaalpramperet.it

From the Val Prampèr to the Case Bortòt, you will be moving within the Dolomiti Bellunesi National Park, where it is compulsory to keep always on the marked paths and where you must behave appropriately in what is a veritable sancta sanctorum of Nature. Make sure you know how walkers must behave within the park, and remember the wardens keep a careful and strict watch over visitors.
Share on:

The Zoldana Variant: from the Rifugio Passo Duràn Tomè to the Rifugio Sommariva al Pramperét. From the Rifugio Carestiato to the Rifugio al Passo Duràn “Cesare Tomè”, follow the directions of Day Nine. From the Passo Duràn, go down a little to the north, about 300 metres, on the Val di Zoldo side, until you meet a flat mule-track which breaks off on the right (north-east) and which is marked 536. The mule-track goes onto ridges covered with lawn and woodland, crosses a little torrent at an altitude of 1568m, and meets path 539 which goes down into the Zoldano area. Stick to the path n.536, that goes east for a bit, then south until the Forcella de le Barance, 1688m, and after crossing the Van dei Gravinài (almost at altitude), it zigzags up to the Forcella de la Càure (Càure = Goats), 1725m. From the saddle, a short descent will take you to the shelter “Baita Valentino Angelini”, 1680m, at the locality of I Scarselóin. The Baita Angelini is an attractive little wood and brick construction owned by the Val di Zoldo Section of the CAI, named after the brave mountaineer and academic Valentino Angelini, brother of Giovanni. Built in 1982, it is equipped with 6 beds and can be used for an emergency stop. It is always open. Water just a few metres away. For information, contact the Val di Zoldo section of the CAI on 0437 78100. Path n.536, after a brief traverse, goes down steeply towards the area of sòra’l Sass de San Bastiàn and, at 1480m, turns east until it meets the 524 which comes up from Pralongo. Keep on the right, on the 536 that goes towards the north spur of the Petorgnòn. After passing the Viàz de l’Ariosto along a ledge and exposed rocks , you will find yourself over the spur and you will reach the bottom of a large couloir. After going up it for a bit, at about 1600m, you will easily reach a promontory. With some ups and downs, continue north-east and then east until the Forcella Col de Michiel, 1491m, which dominates the Val Prampèr, the Pian dei Palùi and offers a magnificent view over the Piz di Mezzodì. After the saddle, the path n.536 goes down through a narrow couloir, then crosses southwards, goes on the Masarèi, and joins the dirt-track road of the Val Prampér, marked 523, at an altitude of 1480. Follow the dirt-track southwards and you will reach the beautiful Casèra (or Malga) Prampèr, 1540m, which offers emergency shelter and outstanding views. Continue south-east on the 523 along a good mule-track which goes diagonally up the slopes of the Cima Prampèr until it easily reaches the Pra de la Vedova and the Rifugio Sommariva al Pramperèt, 1857m.