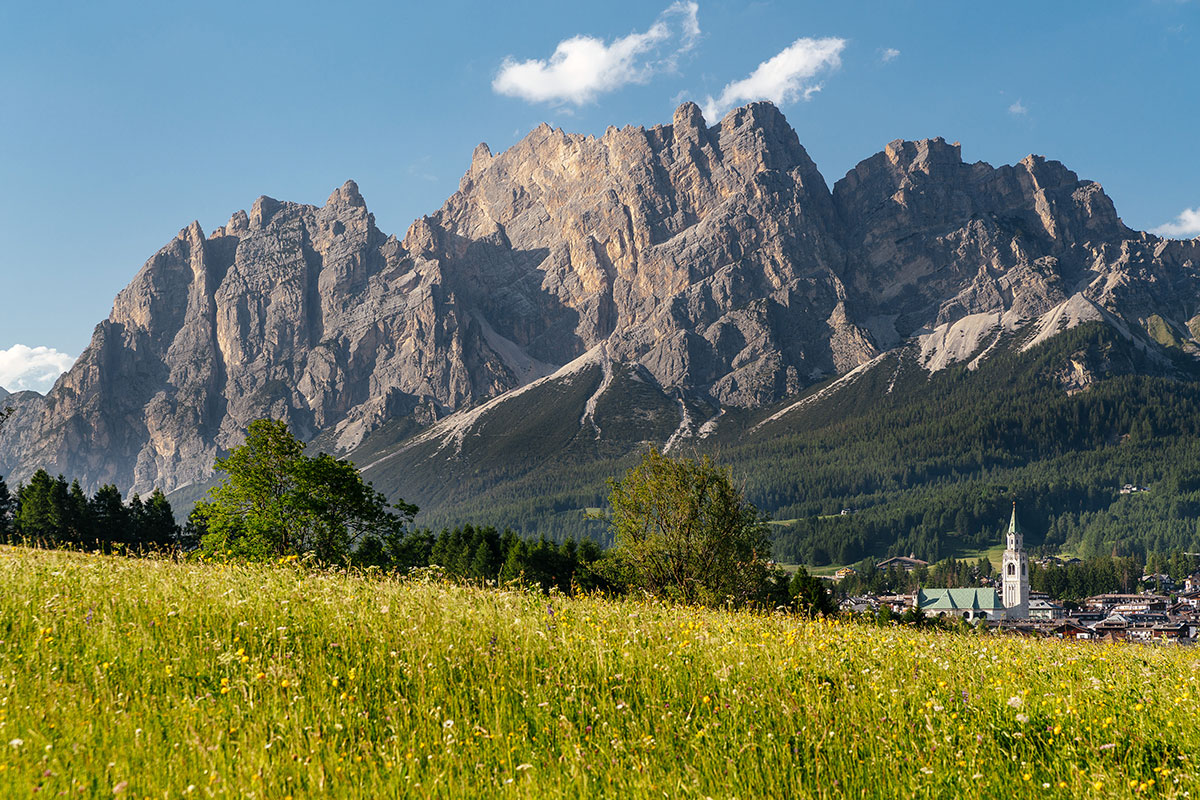 From the car park on Via del Parco, take the asphalt road that runs downhill towards the bed of the river Boite. Leave the last houses of Cortina behind, cross the bridge and continue along the easy rough track that runs across a lovely meadow that offers a 360° view over Cortina, which can be enjoyed from one of the benches along the track.

Behind you is the bell tower and the Pomagagnon mountain group; you will have the Tofane mountains on your right, Becco di Mezzodì in front of you, and Sorapis, Faloria and Cristallo on your left. The track starts to run downhill until you reach the first houses of Campo, one of Cortina’s historic outlying hamlets.

Continue along the road, which is very quiet, enjoying the view of the traditional houses and taking a look at the Campo church, small but important. It was built in the 18 th century, it has a 16 th -century altar, and its bell is from Botestagno Castle, which guarded the valley from the north. Carry on along the tarmac road, turn left and walk through the small hamlet Salieto until you reach a crossroads. Keep left and follow Via delle Guide until you cross the small bridge over the river Bigontina and reach the church Chiesa della Madonna della Difesa. This church is also worth a visit: in its current form it dates back to 1750, but it was first built in the 15 th century as a tribute to the Madonna for the victory against the soldiers of Sigismund of Luxembourg, who greatly outnumbered the men defending the Ampezzo valley. Continue along the road which runs alongside the cemetery and brings you back to the starting point in a couple of minutes.

By bus: Take a bus to Piazza Roma, and from there you can reach the starting point in a few minutes, by taking Via Difesa and Via del Parco.

After having gone through Salieto, instead of taking Via delle Guide, turn right and continue until you reach the state road. Cross it and take the cycle-pedestrian path along the disused railway, walking towards the centre of Cortina until you reach the bus station. From there, walk down to Corso Italia and carry on back to the starting point. This variant adds about 20 minutes to the total time.