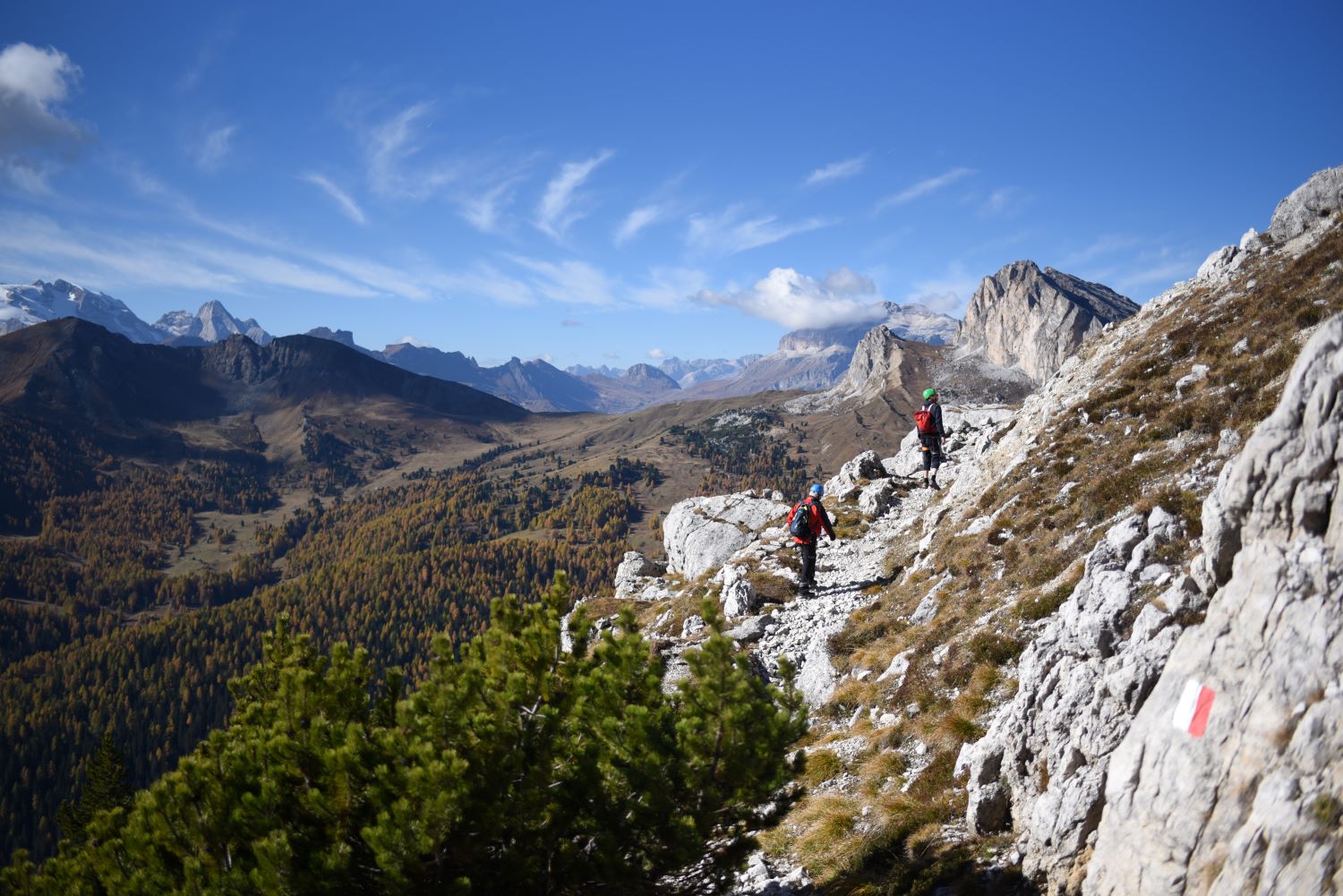 The Sottotenente Fusetti via ferrata is absolutely unmissable for enthusiasts, because it gives you a close-up view of the impact that the First World War had on the Dolomite mountains. The route is straightforward and evocative, and it unfolds amongst the trenches of Sass de Stria. It is a via ferrata suitable for everyone, from families to beginners.

From Cortina, go to the Falzarego Pass and from there, turn right towards the Valparola Pass and leave the car at the Forte Tre Sassi Museum. Take track n° 18 that runs along Sass de Stria on the slopes facing mount Lagazuoi. Don’t take the first two paths that you see on the right, but the third, which leads directly to the start of Galleria Goiginger, a mainly level tunnel that was used by the Austro-Hungarian troops to respond to Italian fire coming from the Cengia Martini ledge. If you would like to complete the tour of wartime itineraries and visit the Italian positions as well, you should take the Gallerie del Lagazuoi via ferrata. Once you have left the tunnel, carry on along the track running downhill, which skirts Sass de Stria and brings you to the start of the via ferrata.

The ferrata begins with a diagonal traverse and continues upwards, with some vertical sections, for about forty minutes. Then you reach a ledge that you traverse towards the right, before starting a second climb upwards that brings you to the last face before the end of the ferrata. The last section comprises the steepest and most technical parts of the via ferrata, and once you have surpassed these, you can continue to the end of the route.

From here you have a fine view of a wide saddle that is almost completely crossed by First World War trenches with a number of wooden crosses. For the most experienced mountaineers, we recommend climbing up to the summit of Sass de Stria; in fact, the via ferrata ends at about forty minutes below the top. Carry on towards the right in the direction of the trenches, and climb a series of metal ladders, and then wooden steps. When you reach the summit cross at 2,477 m, you can admire an incredible view of the surrounding peaks and over the locations on the Dolomites involved in the Great War.

For the return trip, go back the way you came until you reach the top of the via ferrata, and from there, follow the track along the trenches that brings you to Forte tra i Sassi.

The via ferrata equipment: helmet, harness, appropriate climbing gloves and the via ferrata kit. It's necessary to have a frontal lamp.