In terms of atmosphere, structure and even the setting, a predecessor of the “Italian Christmas movie” genre can be found in Winter Holidays (Vacanze d’inverno, 1959) directed by Camillo Mastrocinque. Luigi De Laurentiis, who had distributed the film, suggested it to the Vanzina brothers as a model for their Vacanze di Natale. Winter Holidays had been filmed in Cortina, and its stars included the charismatic Rome-born actor Alberto Sordi, and the great director and actor Vittorio De Sica, father of Christian De Sica who would later star in many “Christmas movies”.

Winter Holidays is a vacation-based comedy with an ensemble cast, and it is one of the many collaborative efforts between Alberto Sordi and the screenwriter Rodolfo Sonego, originating from Belluno. Considering both the year in which it appeared, and the presence of tourism and holidays as the predominant themes, this film could be defined as a “boom-years comedy”, typical of the feeling of economic affluence that flowed through Italy in the late 1950s and early 1960s. Holiday comedies became a true movie genre, and their main hallmark was the way in which they reflected the Italians’ new habits, and the presence of elements of social criticism, with little tolerance and a lot of cynicism.

Just like the future “Christmas movies”, these earlier films share features such as ensemble casts, humour based on farcical situations, the collisions between personalities of very different regional and social origins, amorous sub-plots, and of course, a winter holiday setting.

As Winter Holidays is set entirely in Cortina, many locations in the Ampezzo valley appear in the film. Of course, from 1959 to today, many things have changed, and some of these locations are no longer as they were in those days. 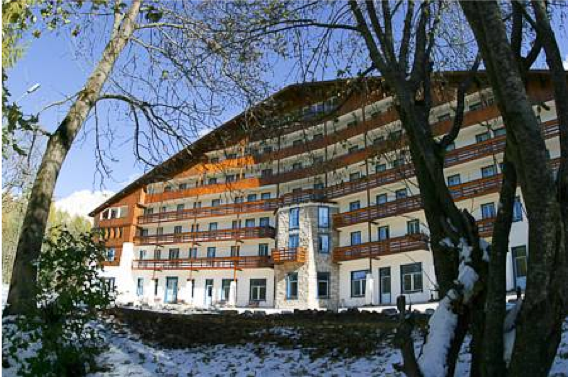 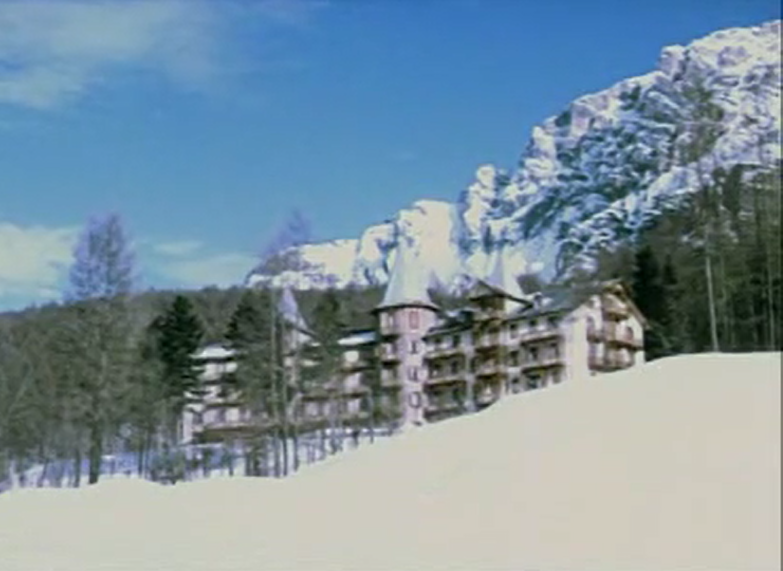 For example, the Grand Hotel at which the Rome accountant Alberto Moretti (played by Alberto Sordi) and his adolescent daughter Titti (Christine Kaufmann) win their prize holiday, and where the apparently impeccable doorman Maurizio (Vittorio De Sica) works, was the Grand Hotel Faloria. In the 1950s, this Grand Hotel was purchased by the Ursuline Sisters, and it was converted into a secondary higher language school, which operated up until 2015 before becoming a holiday home, also managed by the Sisters. 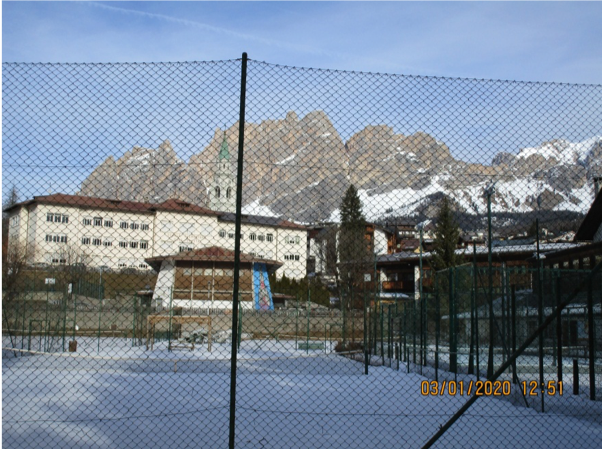 The snow-covered field on which the show jumping competition takes place, watched from the stands by the various characters in the film, has completely changed as regards its use. In fact, in those days it was an open-air ice-skating rink, which could potentially be used for other activities when covered in snow. Today it has been adapted to host the Apollonio Tennis Club and its courts.

The featured locations also include the Col Drusciè Mountain Lodge, which even back then was very popular for its sun-drenched terrace. The Col Drusciè Lodge appeared in several parts of the film, including a hilarious sequence set not on the lodge’s terrace, but at the top station of what is now the Tofana - Freccia nel Cielo cable car. The accountant Moretti, in his attempt to become part of Countess Paola’s (Eleonora Rossi Drago) luxurious world, ends up tumbling down, on his skis, the “black” (difficult) piste that starts precisely at the Col Drusciè lodge. One shot shows a sign next to Sordi, with the warning “Pista A – molto ripida” – Piste A, very steep. 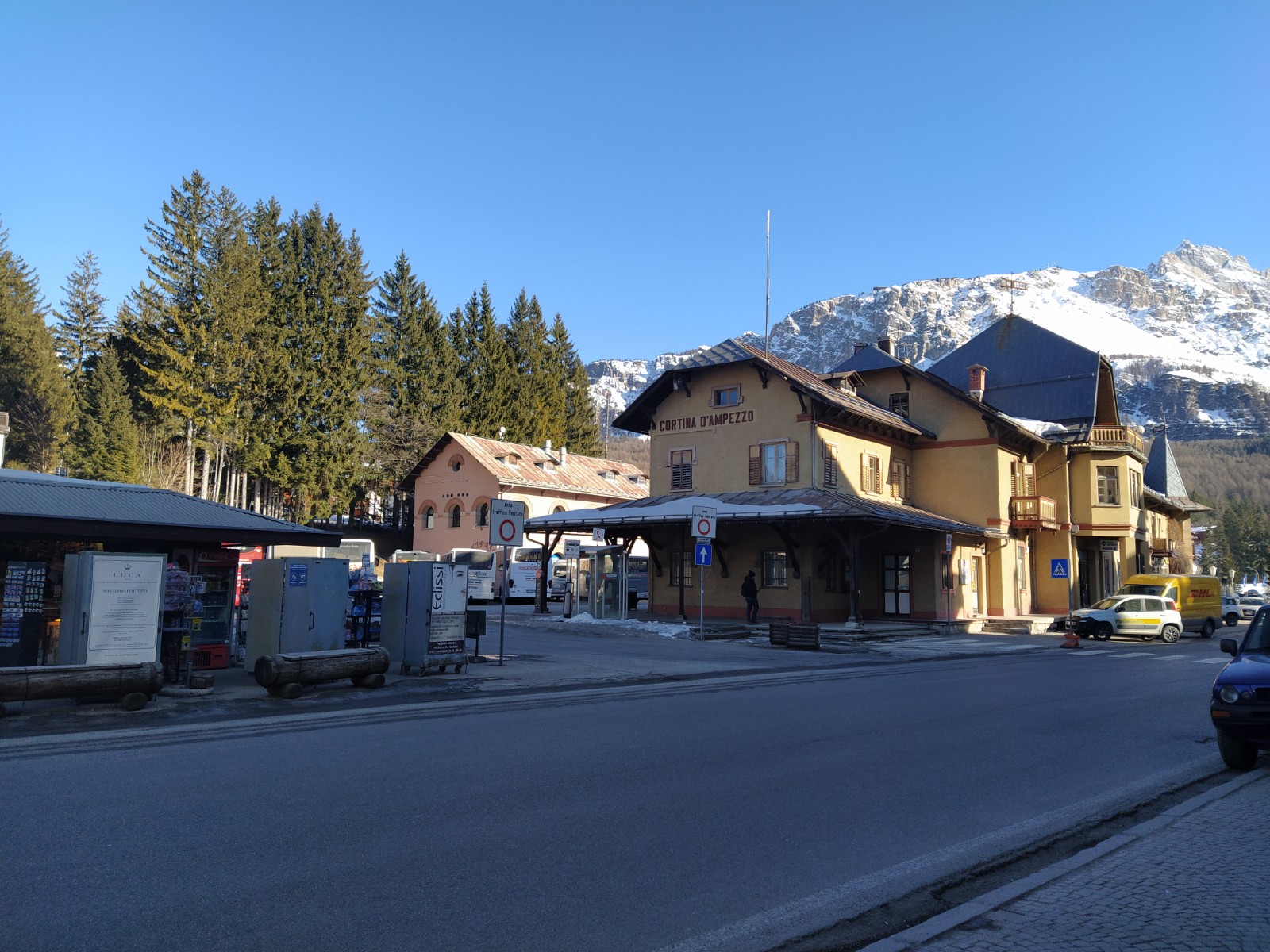 The ending is set in Cortina’s railway station, where we see a submissive and disheartened Moretti getting onto the train directed to Rome with his sensible daughter Titti, after having had to leave his car, in which they had reached Cortina, in lieu of the many debts he had accumulated. The station has also changed radically: in the 1960s it was converted from a railway station to a bus station, a function that it still performs today.

Amongst all the films set in Cortina d’Ampezzo from the 1980s on, those that attained greatest success amongst the Italian public, and that set the seal on Cortina’s definitive status as the most famous winter tourism resort in Italy, were the so-called “cinepanettoni” or “Italian Christmas movies”.

These Christmas movies, whose screenwriters and directors included the brothers Enrico and Carlo Vanzina, and which were all produced by Luigi and Aurelio De Laurentiis’s Filmauro, are hallmarked by certain shared distinctive characteristics:

However, the Italian term “cinepanettone” (literally “panettone film”) used to describe this Italian Christmas movie genre from the early years of the 2000s, was probably applied more to contemporary films, often with a disparaging connotation, than to the productions made two decades earlier.

Created as the winter version of Time for Loving (Sapore di mare), directed in the same year by Carlo Vanzina with screenplay by his brother Enrico, Vacanze di Natale is considered as the first Italian “Christmas movie” and it is generally appreciated more than the other films in the genre, for its light and ironic brand of comedy, its well-written interweaving plot lines, and the genuine portrait that it painted of contemporary Italy. Its criticism of the habits of the nouveau riche, forced to come to terms with other classes of society, is always present but never biting, and generally filtered and softened by humour. Today the film has acquired a vintage and nostalgic patina, as a result of the unforgettable pop soundtrack, the accurately-depicted customs and conventions of that period, and its colourful aesthetics that have no qualms in revealing the way in which young people enjoyed themselves in those days, as well as the fashion of the time and the carefree atmosphere that is difficult to look back on without nostalgia.
Vacanze di Natale immediately highlights Cortina d’Ampezzo in the opening credits accompanied by the iconic song Moonlight Shadow (Mike Oldfield, Maggie Reilly), and with a series of shots of skiers on the pistes, extensive wide-angle views of the snow-covered valley and the peaks of Cinque Torri, cable cars and ski-lifts, skaters at the Ice Stadium, and other virtually documentary sequences of enjoyment, skiing, snow and landscapes, ending with a classic Ampezzo chalet. In this way the location is presented as an element of central importance from the start, and the themes of enjoyment, sport and relaxation that hallmark the entire film are introduced. 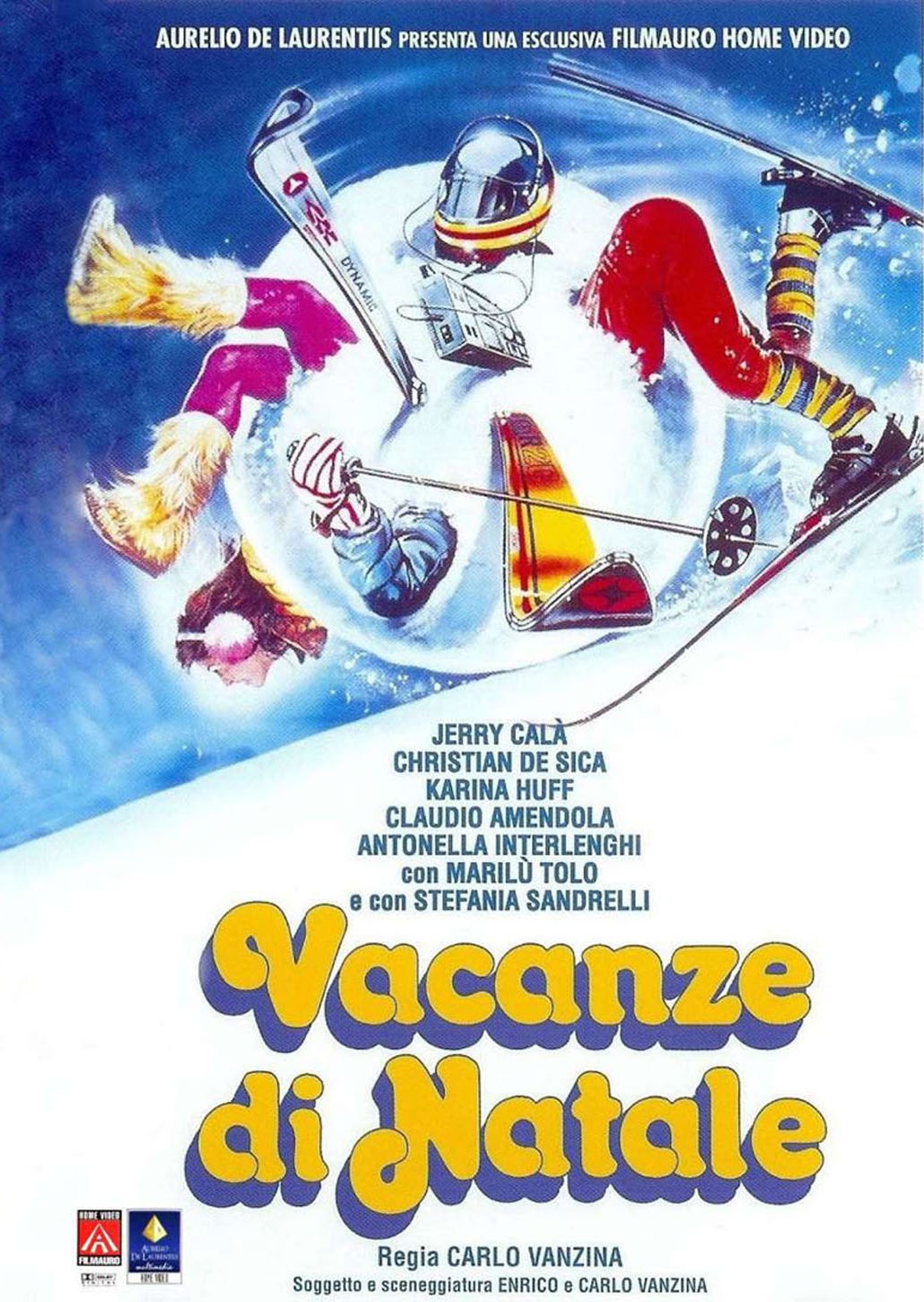 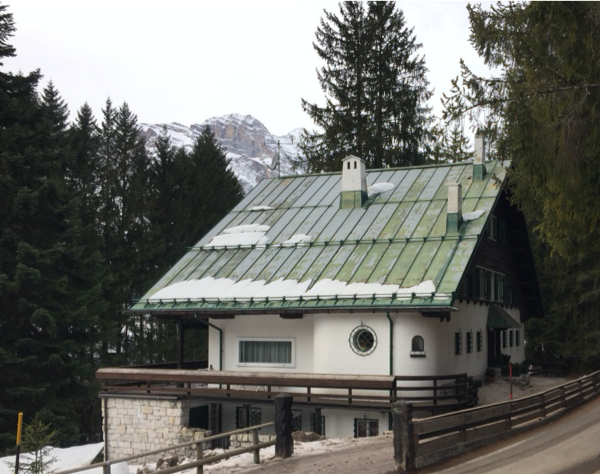 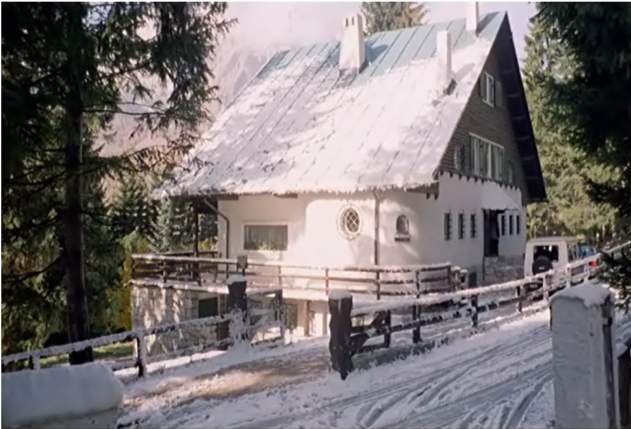 With the exception of the wealthy Covelli family from Rome (amongst whom is the young Christian De Sica) whose holiday home is in fact the above-mentioned chalet, actually located in the hamlet of Pecol and named Baita dell’Orso (a private home), and Billo, the pianist and singer played by Jerry Calà who lives in a modest wooden apartment situated in the hamlet Zuel di Sotto, all the other characters are staying in two hotels. 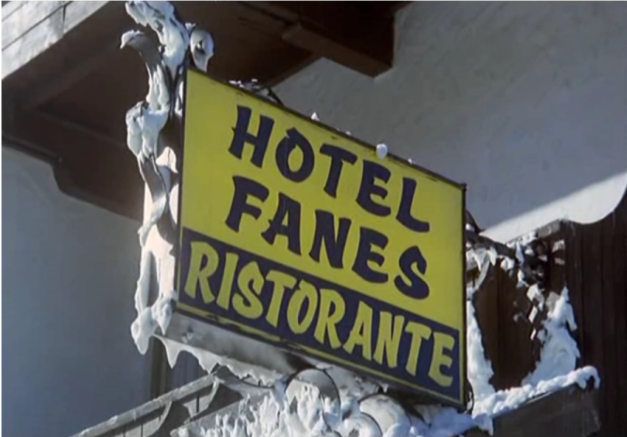 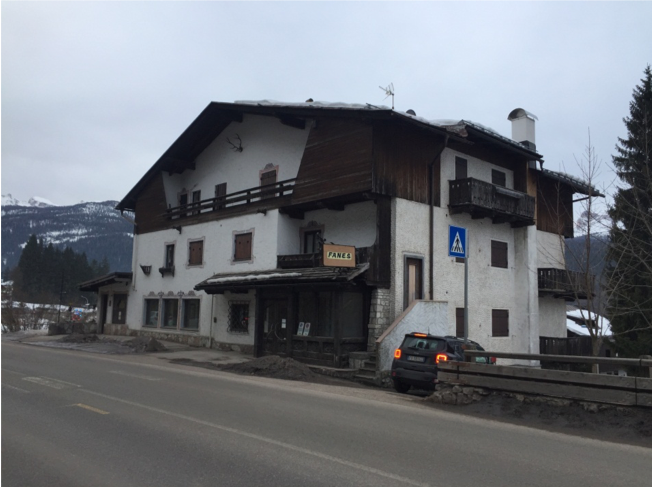 The first is the unassuming Hotel Fanes where the Marchetti family, also from Rome but decidedly less affluent than the Covellis, are staying. The hotel, which closed in 2002, is the first that you see on the Alemagna state road when arriving at Cortina. It has been surmised that the Vanzina brothers purposely selected this hotel as it was cheaper and further out from the town centre.

The second hotel is in a completely different category with respect to the Fanes: it is in fact the luxurious Cristallo, a Luxury Collection Resort & Spa, one of the historic grand hotels built in the Ampezzo valley in the early 20th century. Therefore, the Cristallo is emblematic of the luxury hotel, the type of accommodation that was preferred by Milan’s nouveau riche such as the character Donatone Braghetti (played by a hilarious Guido Nicheli) and his wife Ivana (Stefania Sandrelli). One of the most famous lines in the film is spoken by Guido Nicheli when he arrives at the Cristallo with his wife, saying to her in an impeccable Milanese accent, “Ivana, just look at the watch! From Via della Spiga to Hotel Cristallo, Cortina: two hours, fifty-four minutes and twenty-seven seconds! Alboreto is nothing!” 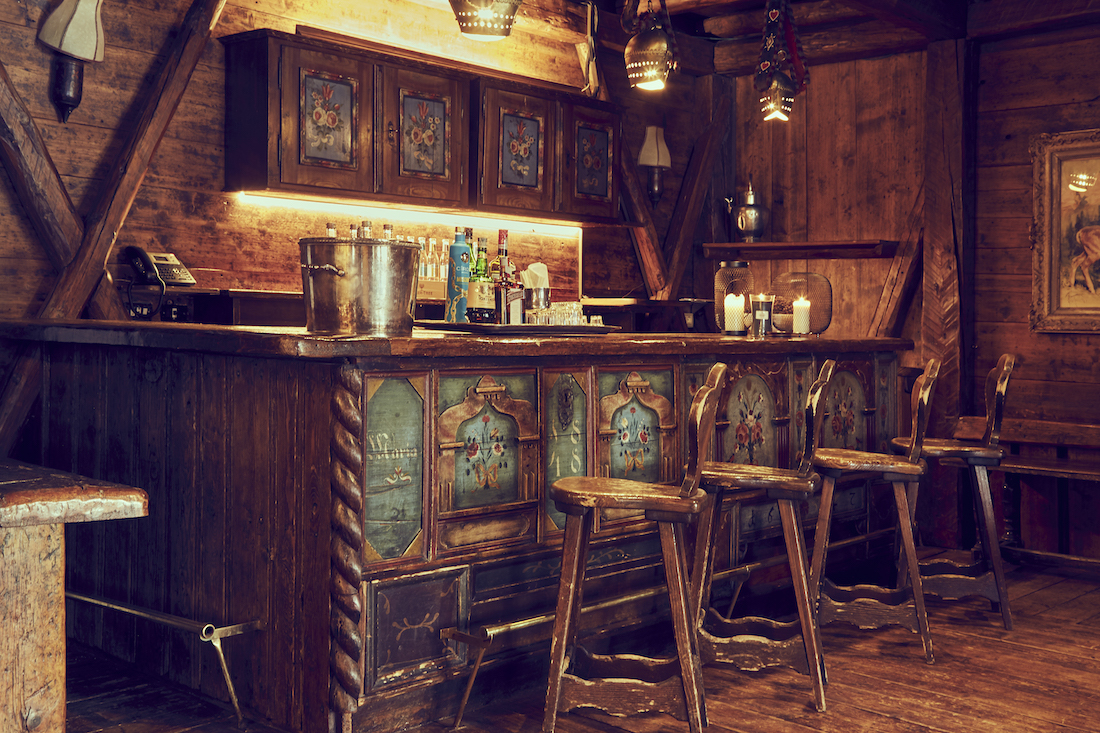 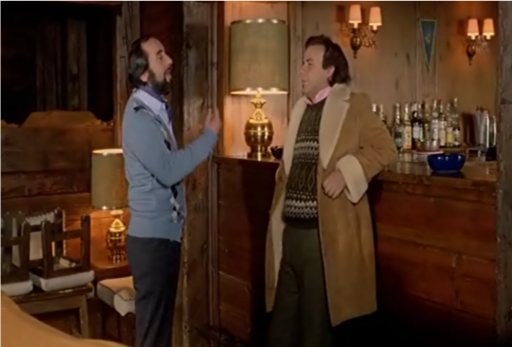 One of the locations that became famous for having appeared in Vacanze di Natale is the Vip Club, opened in 1972 by the Cardazzi family, which owned Hotel Europa. The family decided to dedicate a ground-floor room to a piano bar, so that guests at the hotel would have a place in which to socialise in the evening. The idea proved to be very successful, and the Vip Club became the best-known restaurant and disco club in Cortina, still today frequented by the Cortina jet-set, and appreciated both for the quality of its dishes and the wines served. It was here that the character played by Jerry Calà, namely Billo, worked as a singer for the season. 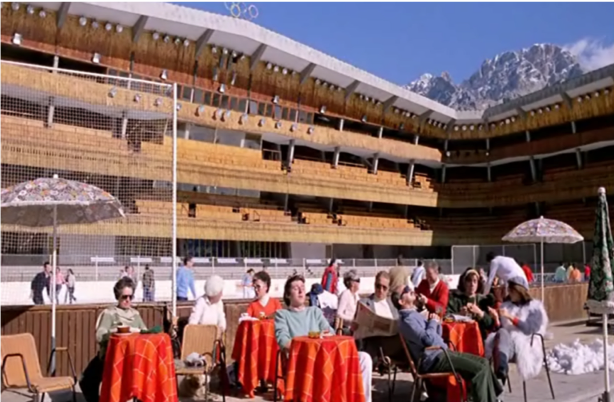 The Vip Club is certainly not the only Cortina venue to appear in the film, even though it is the only location habitually frequented in the evening through to the early hours. After skiing all day, a break for refreshment in one of the many mountain-lodges adjoining the pistes is unmissable: the group of young Romans, including Roberto Covelli (Christian De Sica) and his American girlfriend Samantha (Karina Huff), visit Baita Piè Tofana, a venue that still today is very popular and intensely frequented. On the other hand, the two Milanese couples prefer the Bar at the Ice Stadium, which at that time looked directly onto the open-air skating rink, and it is here that the actor Guido Nicheli has another iconic line, saying to his wife who wants to go skating, “But libido is here, my love: sun, whisky and you are in pole position!”

MAP OF THE VENUES