Through rock and clouds: Cortina’s leg of the Giro d’Italia

After being left behind by the leading group for a while, Egan Bernal caught up before the Giau Pass, kept the lead all the way on his descent towards Cortina and crossed the finish line in town wearing the Maglia Rosa. 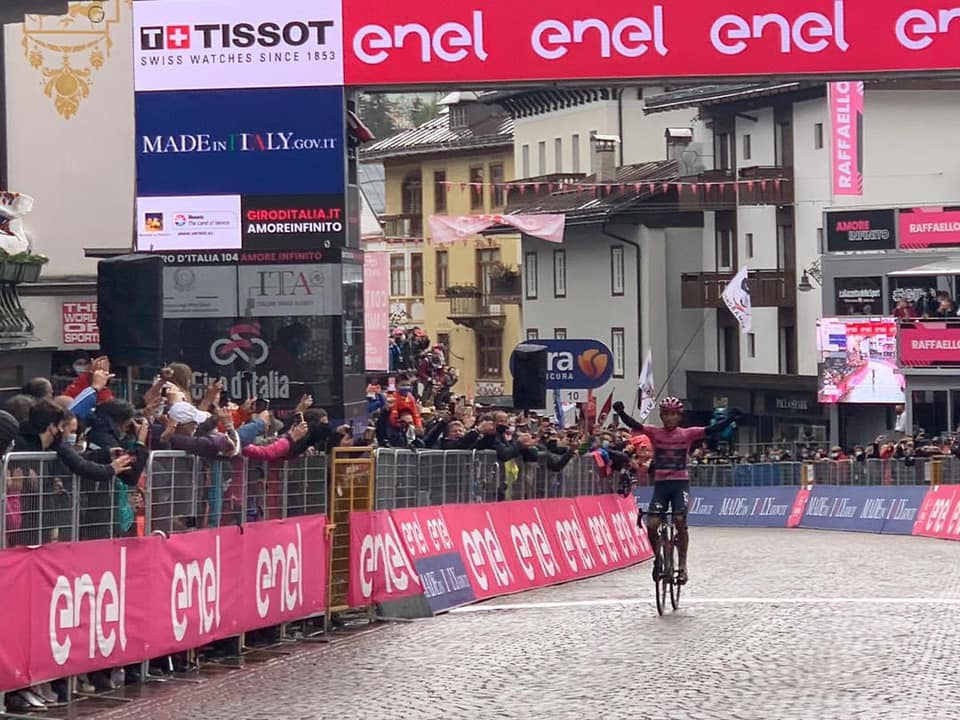 Sacile-Cortina was supposed to be long, hard, the Giro’s mountain stage par excellence. But the heavy rain, occasionally snow, falling on parts of the itinerary brought the organisers to shorten the route to “just” 153 km instead of 212. Of the four passes originally in the leg, only the Crosetta and Giau remained. Even in this shorter version, the race was still demanding because of the route and bad weather.

After being left behind by the leading group for a while, Egan Bernal caught up before the Giau Pass, kept the lead all the way on his descent towards Cortina and crossed the finish line in town wearing the Maglia Rosa.

During the stage, especially in the second part, the tv signal was often problematic, leaving the description of the race only to voice commentary. This gave way to imagination, bringing the Giro back to its old times, when cycling was Italy’s most popular sport and the Giro was followed in one’s mind, with the voice of the radio reporters and the words in newspapers taking one’s imagination by hand. In 1949, even Dino Buzzati, one of Italy’s greatest writers and journalists, reported the Giro. Talking about the Dolomites, he wondered “Are they rocks or clouds? Are they real or is it a dream?”.

Making his way through the rocks and clouds, Bernal won yet another leg of the Giro. In Cortina’s town centre, camera signal was back to show Bernal taking off his raincoat and crossing the finish line triumphantly in his pink jersey.

“2600 metres closer to the stars” used to be the claim of a tourism campaign of Bogotá, Colombia’s capital and Bernal’s hometown. Passo Giau, the highest point of the Sacile-Cortina stage, is 400 metres shorter, but the reference still seems valid. Winning this leg between the clouds of the Dolomites, cutting the finish line wearing his pink jersey in Cortina, a place so symbolic and significant for so many sports, Egan Barnal is a bit closer to the stars.