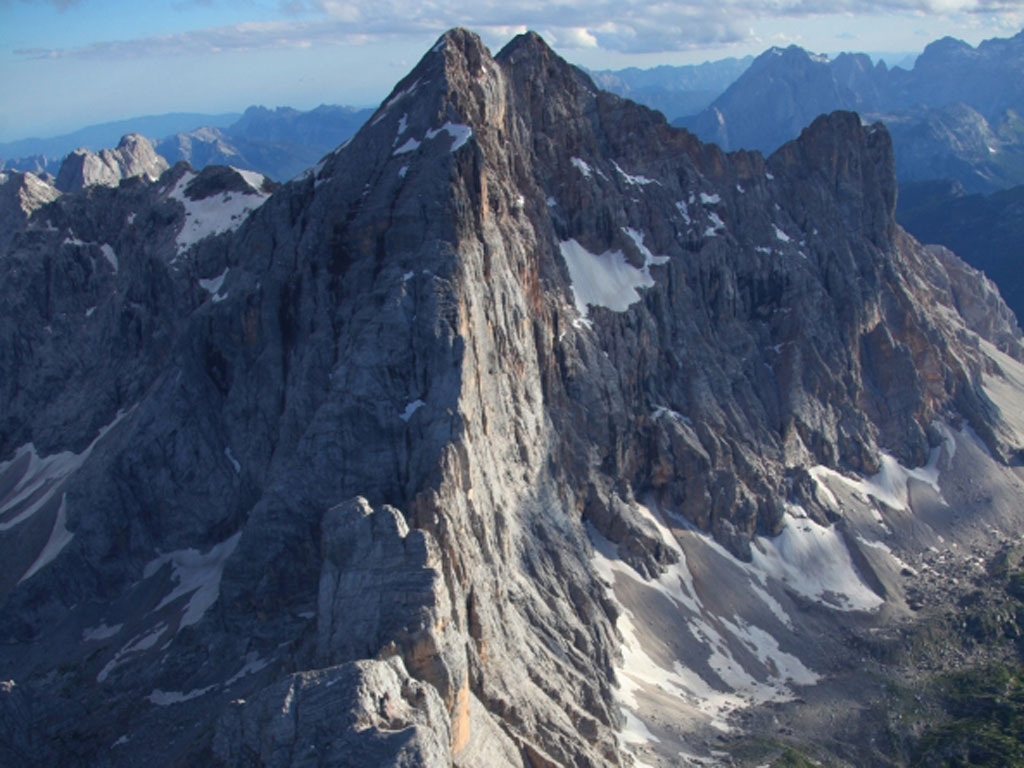 This is perhaps the most beautiful walk in the entire Dolomite area for the majestic rock wall that dominates the trail and follows it along its entire course.  From  Alleghe you take the  lift to Piani di Pezzè, then the new 8 seater cable car up to Còl dei Baldi, and you take the first path veering towards the East that leads to the  Malga Pióda (altitude 1816 m) where it then changes direction and turns South along the old military supply route and the trail shoot up to the  Rifugio Coldài (altitude 2132 m), the first lodge in a series of structures built by the Venetian CAI association in 1905. Now we follow the path  (marked n. 560), that goes up to the Forcella Coldài (2191 m) where after a few minutes it starts to head down towards the lovely little Coldài Lake (2143 m – a little deviation to the right offers views of the high  valley of the  Cordevole, the Marmolada and below, Alleghe Lake). Proceeding under the Torre Coldài there is a brief climb that leads to the Forcella di Còl Negro (2203 m); this point dominates the entire Val Civetta and comes into contact with the immense, smooth North-western  wall, from the Torre d’Alleghe to the top of the Civetta (3220 m) and Piccola Civetta (3207 m) that overlooks the hanging glacier called  Cristallo. You continue on an up and down path among icy floes, minor war remnants  and rocky crags, then it is down until you cross the path that comes up from Alleghe, where there are more fabulous views of the lake, and then you start to head up again towards the fork of  Còl Reàn and the lodge dedicated to Attilio Tissi (2250 m) built by the Belluno CAI association in 1963; shortly you make it up to the peak of  Col Reàn  with its enormous holy cross (2281 m) where on one side the scenery rolls down on the Cordevole Valley and on the other side the mythical wall rises up, the theatre for many remarkable rock climbing feats, so much as to merit the distinction "reign of the sixth degree"; on the way down in front you will see the marvellous architecture of the "grand triad", the peaks of  De Gasperi, Su Alto and Terranova. The trail descends southward and passes the Forcella di Còl Reàn (2107 m)  and crosses tracts of pasture land all the way to Piàn de la Lòra (1119 m), passes the Casón di Còl  Reàn and continues on a slight rise to the Sella di Pelsa (1954 m); in this stretch the overhanging wall loses its solid impressiveness to break up into the Aghi di Pelsa, a series of towers and  spires of various shapes and sizes, including the Campanil di Piàn de la Lòra, the Gobbo de la Lòra, the Campanile di Brabante, the Bòcia and Punta Agordo. You proceed along an easy path downwards until you come to the Case Favretti (1827 m) where the path continues among enormous masses of rockslides under the imposing wall of the Torre Venezia; here we are in the vicinity of the  Rifugio Vazzolèr (1714 m), built in 1929 by the  CAI association from Conegliano. Worth noting here is the presence of the “A. Segni” botanical garden and the tiny chapel in memory of those fallen in the mountains, with the names of each victim engraved on two marble slates.   From the lodge you follow the old mule trail that goes down to Piàn de le Taie (1625 m) that comes out on to the Val Corpassa with the massive Busazza structure in front, and the smooth, vertical wall of the elegant Torre Trieste. You go down the Mussaia following the straight ways and curves in the road, pass a small refuge, the Ginetto mountain shack, and in a little while you reach  Capanna Trieste (1135 m).  If there was no plan instituted to return by car, you continue walking along the asphalt road for about 3.5 Km to Listolade (700 m)  where we can catch public transport for the way back.