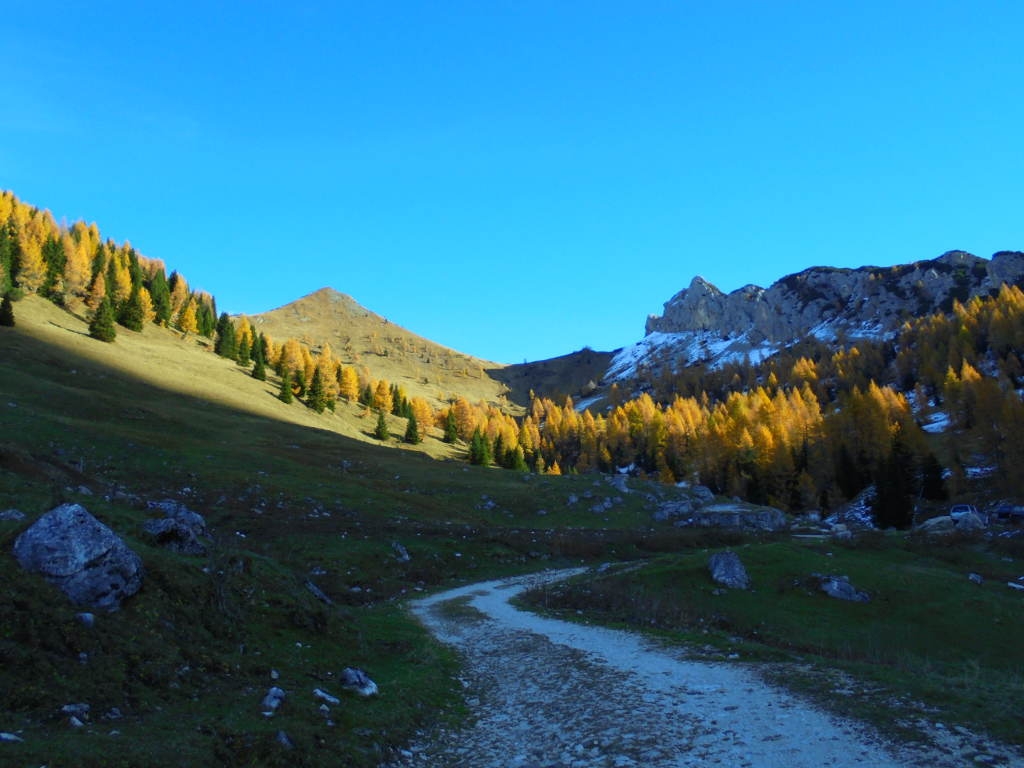 This route is accessible in Winter, with snowshoes, up to Forcella Forada; in Summer it is accessible both by MTB and on foot (with footwear in good conditions!).

The shortest route to move from the Fiorentina Valley to the Cadore Valley is definitely the way through Forcella Forada, situated in the northwest direction in respect to Mount Pelmo; it is the path that the inhabitants of the valley used in the past for their trade relations with the Cadore Community, on which they depended administratively.

DEPARTURE POINT: the ideal starting point for this excursion is the parking lot at the base of the scree of Mount Pelmo located at the third hairpin turn of the Road 251 that connects Pescul with Passo Staulanza.

ROUTE: The dirt road winds through a sunny wood full of rhododendrons until Malga Fiorentina, offering amazing views on the striking slopes of Mount Pelmo and of the surrounding Dolomites (Civetta, Crot and Fertazza, Marmolada, Padon, Sella, Col di Lana, the Cernera group – Piz del Corvo, Lastoni di Formin, Croda da Lago, Rocchette). Nearby Malga Fiorentina, the tourist can enjoy a peerless overall view of the Fiorentina valley that is definitely worth a break. After a short stretch of road, the tourist will reach Rifugio Città di Fiume, founded in 1964. From this place the view of Mount Pelmo is indescribable: you only need to see it and it will remain in your heart and in your eyes forever, especially if you are there at dawn, when the sun's rays begin to lighten the sky, or if you arrive at sunset, when the immense slopes are tinged with red with almost infinite shades from orange to violet: it is the phenomenon called "enrosadira", celebrated in the most beautiful legends.

From the ample space in front of Rifugio Città di Fiume a clear trails sign indicates different destinations: with the trail towards North-West you can reach the Bec de Mezdì, Forcella Ambrizzola and Croda da Lago; the one towards South leads to Passo Staulanza through the Pelmo's scree and a wood of mountain pines. With the mule track on the East it is possible to reach Forcella Forada (between Pelmo and Soratiera) after a walk of a few minutes right at the foot of the majestic Mount Pelmo; in this place it is very easy to glimpse chamoises grazing grass between the rocks.

In Forcella Forada, after crossing a weir, the landscape changes completely: Val Fiorentina is now behind, and you will be facing the Boite Valley, dominated by the impressive Croda Marcona of the Sorapis.

A few meters after reaching Forcella Forada, very close to the slope, there's a little, ancient natural shelter for travelers which over the centuries has become a chapel dedicated to Sant'Antonio: still nowadays, on June, 13th, the people of Selva di Cadore and San Vito di Cadore meet here to celebrate this Saint, Patron of the Cadore area.

Please note that for over 4 Centuries until the outbreak of World War I, the boundary between the "Serenissima" Republic of Venice (and the Reign of Italy in a later stage) and the Austrian Empire was located between Cortina d'Ampezzo and San Vito di Cadore; the trail of Forcella Forada was thus an internal, national trading route whereas the road to Passo Giau was dutiable since it was an international route!