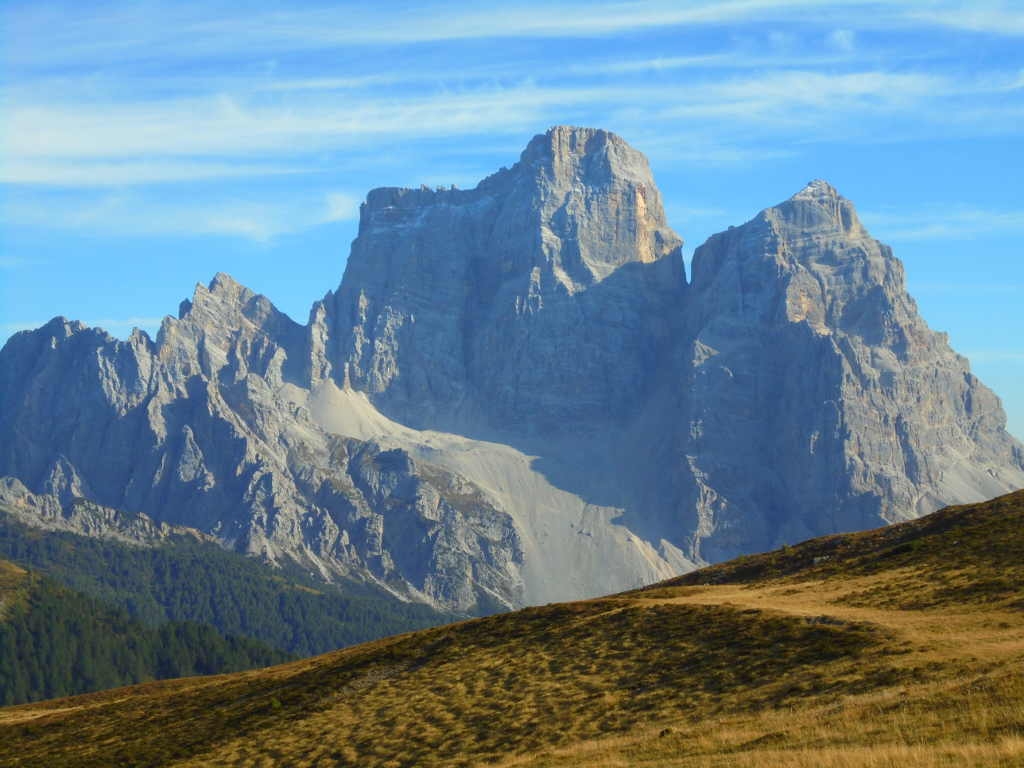 The Tour of Mount Pelmo

Varied and extremely beautiful itinerary which allows you to enjoy all the sides of Mount Pelmo: from the imposing southern faces to the eastern face with the large basin, main characteristic of this mountain, to the scree covered gullies of the north-east face and to the imposing and severe north-west face.

The Pelmo tour can be tackled setting off from Forcella Staulanza saving a few vertical metres compared to other possible approach points.

Start by walking up the ancient Tríòl dei Cavai which allows you to come out of the woods at the base of the western arête of Pelmetto (from where a path leads to the stone with the dinosaur footprints). Continue on the mountain’s southern face, reaching the wide pasture area of Le Mandre, vertically below Fisura, panoramic and remarkably beautiful. Continue by crossing the open area of I Lach and go round Pelmo’s large south-eastern ridge which is level with a peculiar rock structure called Dambra (buttress). Reach another pasture area, Campi di Rutorto, and continue along the eastern side till you reach Rifugio Venezia.

From the hut, overlooking Cadore and Ampezzo and the summits of Antelao and Sorapiss, the itinerary’s most tiring section starts, the ascent to Forcella di Val d’Arcia which allows you to pass onto the northern side. The itinerary is steep and the ascent is made easier with metal cables which help overcome a few difficult moves at the base of Forca Rossa’s lower tower. This is the path called Flaibani which follows an old path used in the past by chamois hunters.

Once the saddle has been reached you look over onto the north face, the itinerary then leaves the Flaibani path, which descends directly to rifugio Citta di Fiume, to then turn onto a path without numbers which cuts diagonally across the enormous debris stream below the north face of Mount Pelmo allowing you to reach, by the shortest itinerary, Forcella Staulanza and the end of the itinerary.

Itinerary which requires excellent physical form. Technically there are no difficult moves, they are equipped to reach Forcella Val d’Arcia.
Share on: