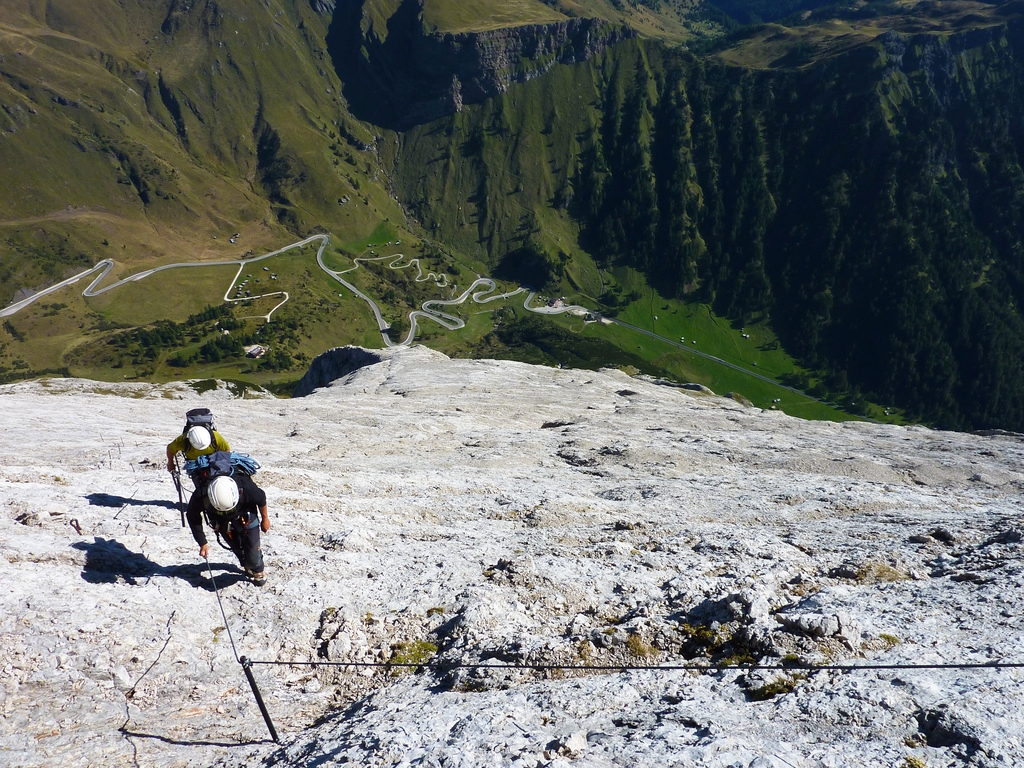 The via ferrata Eterna has been completely re-equipped, retracing the old track except for start point, moved on the right on compact plates which are less subject to debris.

You reach the starting point of the Eterna from Rocca Pietore or Canazei. You have to leave your car in the large car park in front of the Fedaia refuge located on the east side of the artificial lake - 2057mt - on Fedaia Pass.

You have to go on the winter ski track (a carriage road behind the shelter) and go uphill. Almost immediately you will see an indication for the ferrata at a hairpin. Continue along the road until you reach an indication on the left margin of the road that invites you to leave the "road" and start an uphill climb in the direction of the ridge, always assisted by the numerous presence of various trails to the base of the dirt jetty from where you will notice a clear track in the direction of the good visible red flag of the starting point of the Eterna - 1.00h from the parking lot.

From the start, not only begins the ferrata but also begins the hardest section of the route with a degree of difficulty far superior to the rest of the ferrata and deserves a proper assessment of capabilities. Afterwards, the leaning plaque rises to the ridge, where you walk between the halls and down to the second station of the Marmolada Cable Car.

With the cable car from Serauta to Malga Ciapela, from where it is necessary to somehow return to Fedaia's pass.
Possible bus service from Malga Ciapela to Fedaia Pass, depending on timetables and period of the year.

Contrary to many other well-equipped paths, the final destination is not the classic panoramic summit but a Monumental Zone witnessing the Great War worth visiting and respecting.
There is also the Great War Museum at the Punta Serauta cable car station.