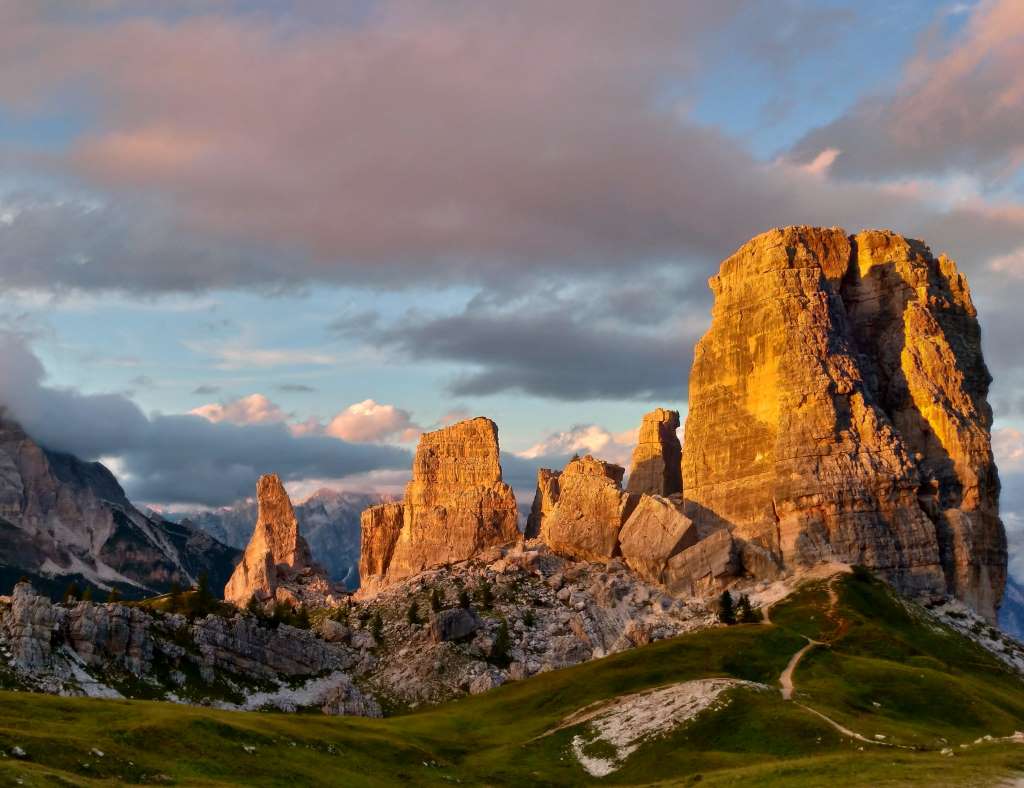 Cinque Torri is without doubt Cortina’s most famous and historically most important climbing location. Cinque Torri is one of the classic rock climbing sites in the Dolomites and the Alps, because it was here that the first members of Cortina’s Scoiattoli (Squirrels) Group came to train. They began climbing here from as early as 1939, the year in which this climbing club was founded. In actual fact, sport climbing developed from the 1970s, therefore later with respect to mountaineering. The climbing walls, which are often hidden in the forest and are relatively low in height, did not attract the first generation of climbers as much as the conquest of the highest peaks in the area. The exception, in the Ampezzo area, is precisely the pinnacles of Cinque Torri, a true natural monument.

The towers reach between 2,200 and 2,360 metres in height, and they are located at the base of mounts Averau and Nuvolau, in a prominent position, easily visible from the Ampezzo valley. They can be seen from the centre of Cortina and from many parts of the town, and at first sight they seem to be five towers. In actual fact there are many more towers and rock formations, with varying inclinations and exposure.

The rock forming these towers is Main Dolomite, and so there are many ledges, roofs and sharp, squarish, almost step-like holds, originating from the rock’s characteristic stratification. Its exposure varies greatly, and is a distinctive feature: the rock on the southern faces is generally yellow and overhanging, with squarish blocks, while on the north side it is greyer, with pockets and tunnels formed by the action of water. The rock faces are at various angles with respect to the sun, and for this reason it is possible to climb almost all year round: north-facing walls can be climbed almost exclusively in summer, while the south-facing walls are ideal for climbing on fine winter days. Cinque Torri comprises over 200 bolted pitches of various grade, from 3 to 8b, in addition to a number of traditional and modern routes (located above all on Torre Grande).

Approach: From Cortina, take the Strada Statale (main road) towards the Falzarego Pass and turn off onto the steep tarmac road towards the Rifugio Cinque Torri mountain lodge. In high season the road is closed to vehicular traffic, but you can take the shuttle service, or walk up in about an hour. Alternatively, leave your vehicle at the Bai de Dones car park and take the chair-lift to the Rifugio Scoiattoli mountain lodge, from where the rock walls can be reached in just a few minutes.

As Cinque Torri attracts many climbers, it is important to watch out for falling stones when you are at the foot of the walls. It is advisable to wear a helmet and take care not to dislodge stones, as a courtesy to other climbers and hikers.
Share on: