Via ferrata and climbing

Metal cables, ladders and suspended bridges through the rocks.
Via ferrata routes are equipped routes, prepared with metal cables, ladders or steps and other fixed features such as wooden walkways and suspended bridges to facilitate passage in difficult points. These man-made aids facilitate passage in difficult points such as exposed vertical rock faces.

In addition to the equipment recommended for any type of mountain trekking (suitable clothing, robust footwear, backpack, first aid kit, food and drink), to ensure your safety when moving along a via ferrata route you need specific equipment. This consists of a protective helmet, a climbing harness, ferrata gloves and a ferrata set.
The ferrata set consists of an energy absorber, two arms that connect to the cable with carabiners, and a means of connecting to the harness. The energy absorber dissipate the energy triggered by a fall, reducing the risk of injury. You may sometimes also need an ice-axe and crampons, depending on place and season, or a headlamp if you are planning to enter some of the numerous tunnels of World War I.

Many of today’s via ferrata routes follow parts of the itineraries used by troops in World War I to approach the front.
There are currently more than 30 via ferrata itineraries around Cortina d’Ampezzo, offering a variety of different features and difficulty levels.
The easiest ones - such as the Ferrata dell’Averau or the Ferrata Giovanni Barbara at the Fanes waterfalls - are suitable for children and families, if accompanied by a mountain guide or an expert. The more challenging ones, such as Ferrata Sci Club 18 are for expert mountaineers only.

The easier ferrata routes are usually called sentiero ferrata (ferrata trail), while the more difficult ones are called via ferratas.
Ferrata trails are shorter excursions, ideal for families and children who would like to try the experience with a guide.

However, please note that even a simple route can easily become difficult and dangerous with icy or snowy conditions, and sudden changes in weather can make even a simple route challenging. Therefore, we advise excursionists  to tackle via ferrata routes and trails in the company of a mountain guide. 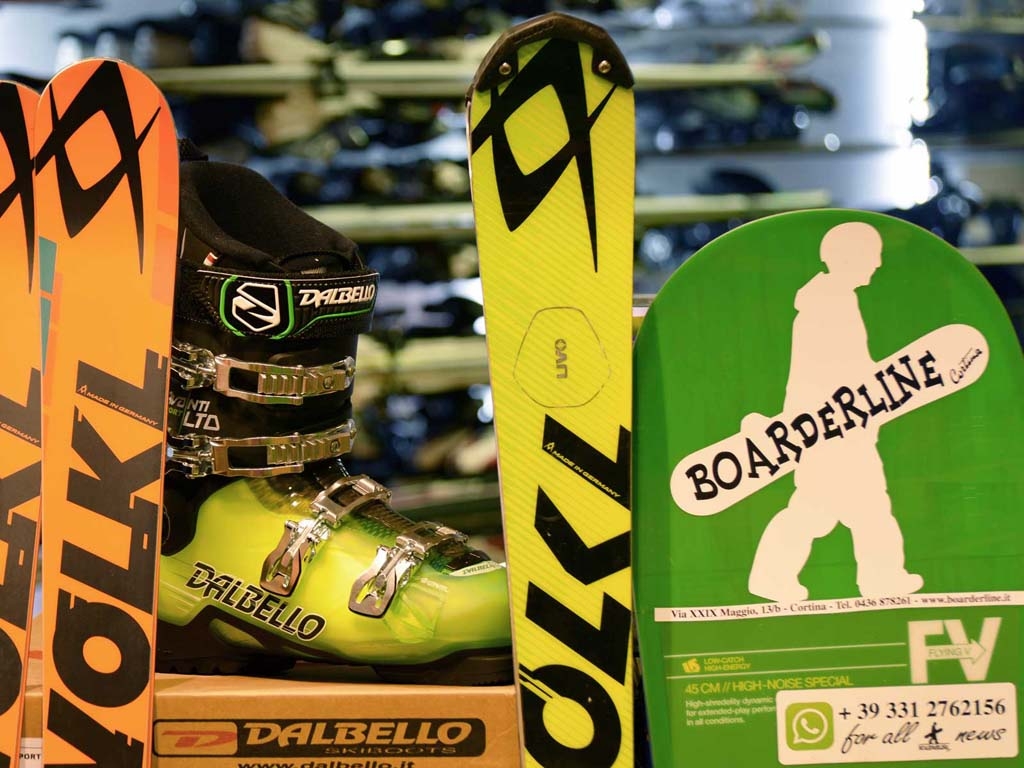 Peaks of adrenaline.
Pinnacles, spires and rock-towers rise majestically towards the sky, beckoning intrepid adventurers. There is nothing like the thrill of climbing towards the peak of a mountain and reaching its summit. This challenge has inspired climbing enthusiasts and novices for centuries.

Cortina d’Ampezzo has 850 sport climbing routes and over 1000 classic and modern climbing routes. One of the most famous and magnificent climbing walls is the south face of the Tofana di Rozes, which offers climbs of various lengths and levels of difficulty in a majestic setting.
Alpine climbing has been practised in the Ampezzo Valley since the mid-19th century.
Paul Grohmann, originally from Vienna, was one of the pioneers of mountaineering in the Dolomites. When he saw the Dolomites for the first time, from the Grossglockner (Austria’s highest mountain), he was charmed by their beauty and decided to explore the area and conquer the summits. In August 1863, he was the first to climb the highest peak in the Ampezzo Valley - the Tofana di Mezzo, 3,244 m - accompanied by the local climber Francesco Lacedelli.
Paul Grohmann became internationally famous and contributed significantly to establishing the reputation of Cortina d’Ampezzo throughout Central Europe. The first hotels were founded, the railway was built, and it led to the creation of a new profession for those who loved and knew these mountains: the mountain guide. In 1871, as many as 9 official mountain guides were registered in Cortina.

Today, there are numerous Mountain Guides working in the area of Cortina d’Ampezzo, available to accompany expert alpinists as well as mountain enthusiasts along the stunning classic and modern routes to the summits of the mountains surrounding the Queen of the Dolomites.  They also offer rock climbing courses for beginners, both indoor and outdoor. 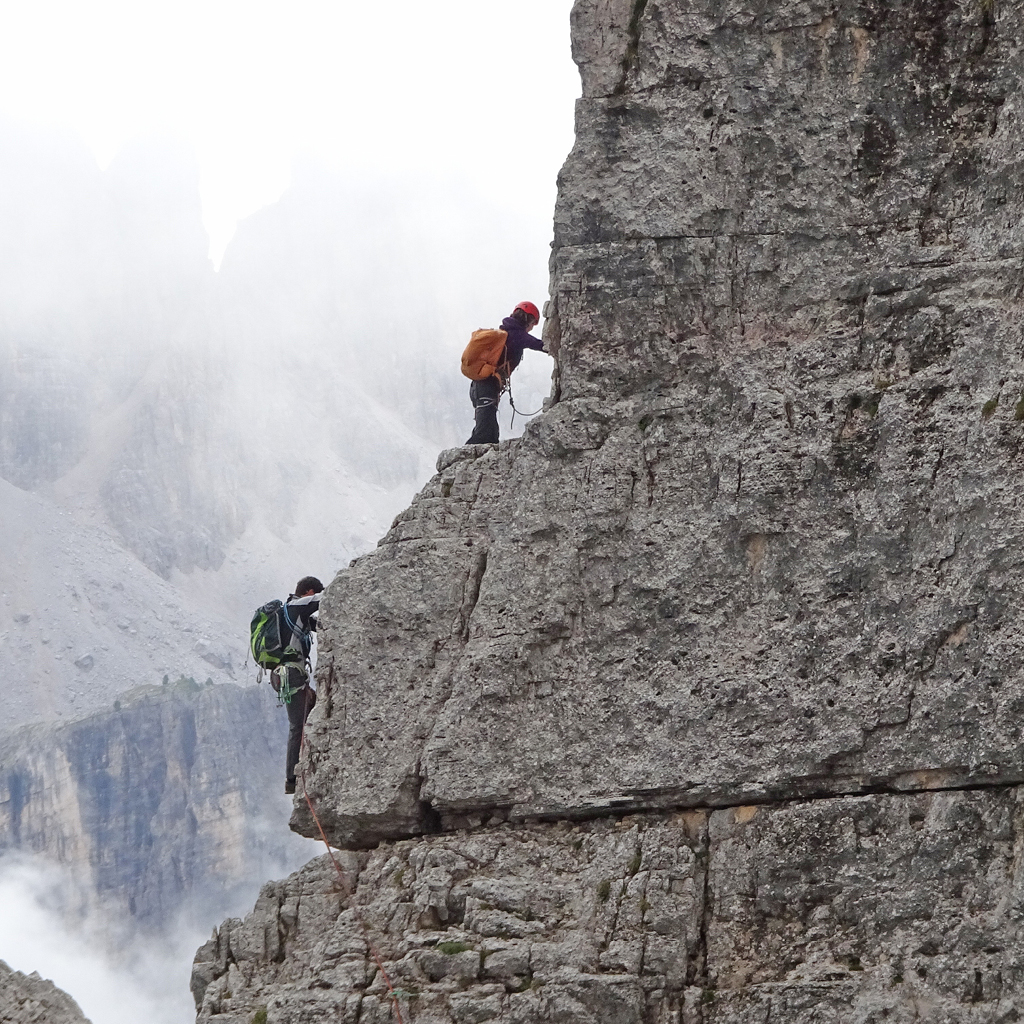 Training outdoor in complete safety.
Cortina is an open-air rock climbing area, a paradise for climbers. Particularly well-known is the historic climbing area of the 5 Torri, where the climbing group of the Cortina Scoiattoli (“Squirrels”) was created back in 1939. It is a group of non-professional local climbers who wear a distinctive red sweater with a white squirrel logo, united by the common passion for climbing and the love for mountains, adventures and their home town.
The spectacular 5 Torri area is one of the most popular in Cortina as it is easy to reach by car or with the lifts. Moreover, there are several refuges nearby, which are excellent stopover points and it offers a great variety of climbing routes, with difficulty levels ranging from 2nd grade to 8b.
Last but not less important, the area offers a stunning 360° landscape, both from the bottom and from the top of the mountains.
In Cortina there are many other rock climbing areas, such as Crépe de Oucèra on the road towards Passo Giau, Rio Gere, Beco d’Ajal, Campo, Volpera and the east face of Sas de Stria, ideal for beginners.
It’s possible to get in contact with the local mountain guides for climbing courses or simply for a one-day experience alpine climbing or sport climbing. 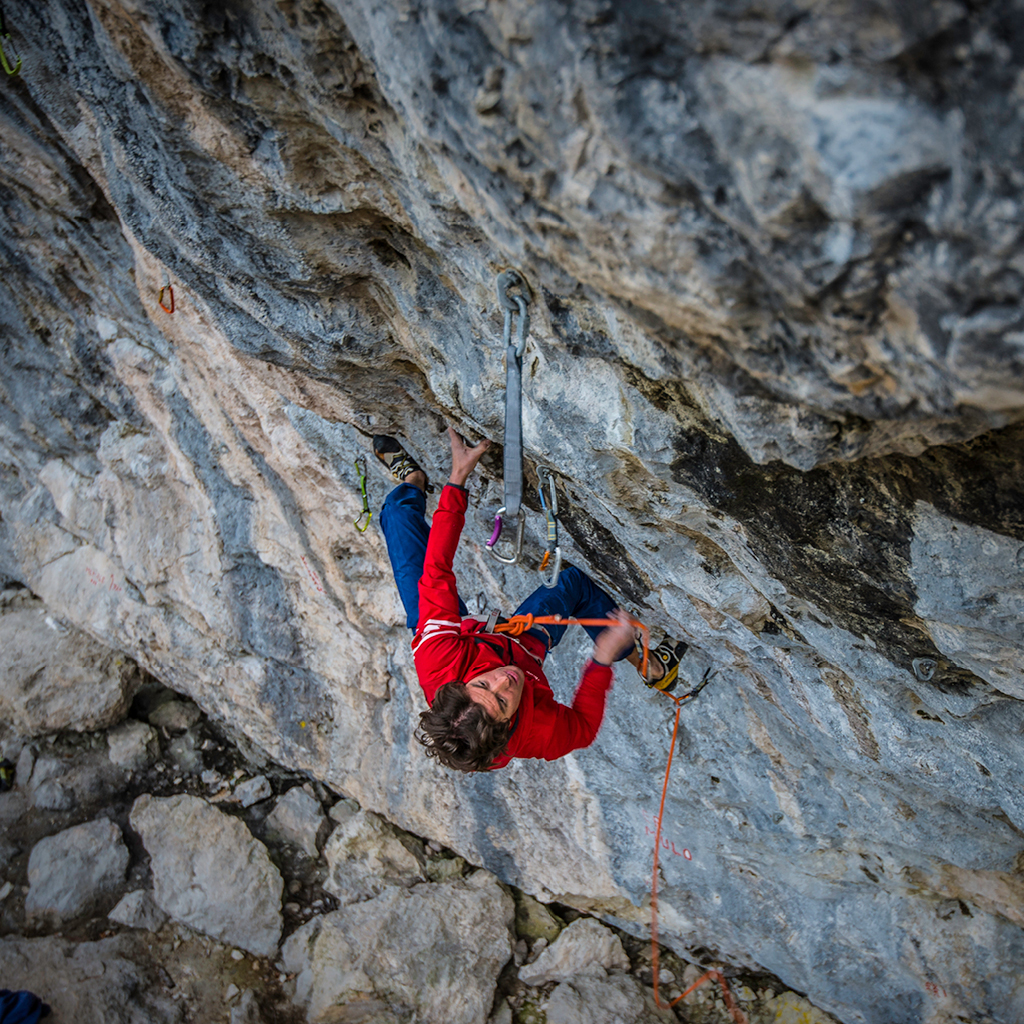 Climbing and training indoor.
From 2018, Cortina offers climbers the opportunity to practise in the indoor climbing centre Lino Lacedelli, which offers over 80 routes from 3b to 8b+ (French grades) on 24m to 30m walls.

The structure offers a lead climbing zone with long and more difficult routes but also an area with shorter routes and easier routes and some top-rope ones for those who are not able to lead climb. There is also a TOPPAS (auto-belay system), which allows solo climbing in total safety.

In addition to the lead and top-rope climbing zone, the structure also offers a small boulder with routes of various length and difficulty in order to improve one’s technique and a training room equipped with an interactive Moon Board, a Pan Gullich and a System Wall for burst power, strength and coordination training.

The gym offers a valid alternative to outdoor climbing when the weather/season makes it difficult or with limited time available. It is only a few minutes’ walk away from the town centre of Cortina, close to the ice skating rink, to the tennis courts and to the gondola Freccia nel Cielo. 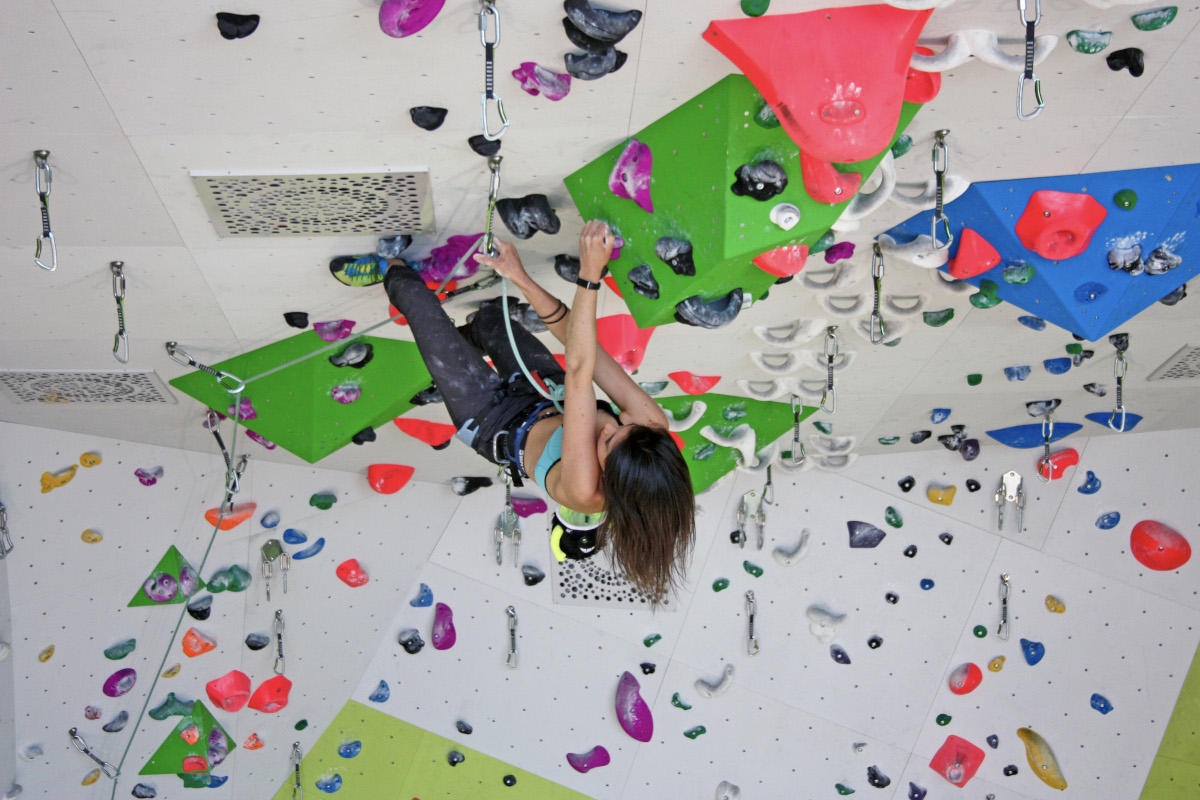