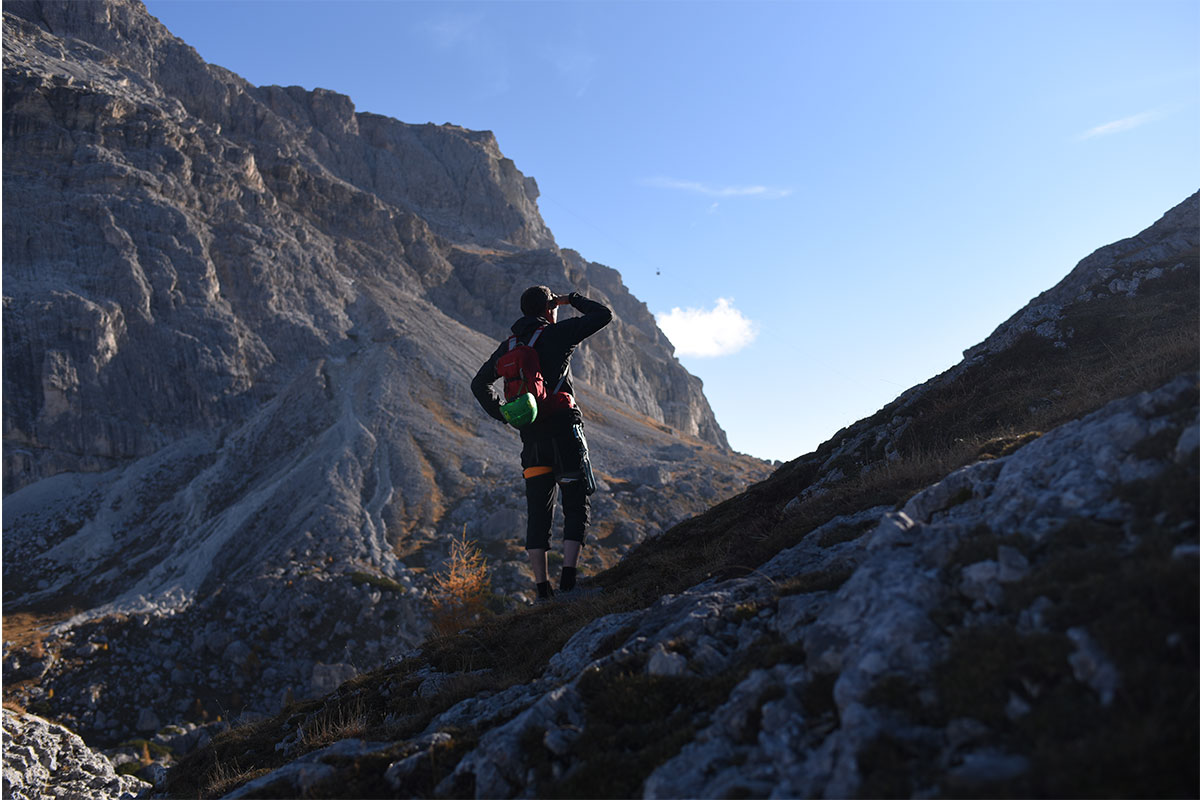 The starting point for this walk is Forte Tre Sassi, or Forte Tra i Sassi. It was built by the Austro-Hungarian Empire between 1897 and 1901 as a fortified garrison to control the pass, but after it was seriously damaged by the Italian artillery, the Austrian high command decided to move their defences to the Dolomitic peaks (Lagazuoi, Settsass and Sass de Stria). Today the fort has been completely restored, and inside it houses a fine display of military objects dating back to the Great War. It is well worth a visit before or after the walk.

From the car park you have a good view of Sass de Stria, which from here looks like a sharp, slender pyramid with a long rocky crest running down for about a kilometre. The name of the mountain is based on an ancient local legend that told of witches living on the grassy slopes around the summit (“stria” means “witch” in the Ampezzo dialect). From the historical point of view, Sass de Stria is an eloquent record of the Dolomitic front during the First World War: in fact, for months the mountain saw bitter fighting between the two sides, as documented by the many remains and marks that can still be seen. During the War it was transformed into a natural fortress, with tunnels and walkways. Today, after the restoration and reconstruction of the military fortifications, Sass di Stria has become part of the Cortina Open-Air Museum of the Great War, together with the Cinque Torri and Lagazuoi areas that were also the theatre of an incredible high-altitude conflict. After the Italian army had occupied Cortina, bringing an end to four centuries of dominion by the Habsburg Empire, the Austro-Hungarian troops retreated to mount Lagazuoi and Sass de Stria to defend the Badia and Pusteria valleys, and the Valparola Pass. After it had become obvious that surface attacks were destined to failure, both armies began excavating tunnels and caves into the mountain, with the intention of blowing up the enemy fortifications and reinforcing their own, transforming the war into the so-called “battle of mines”.

From the car park you can see the track that climbs gently upwards amongst shrubs and rhododendrons, leaving the Fort behind you. In half an hour you will reach the central area: a large rocky platform where the panorama opens, for fantastic views of the mountains Lagazuoi, Averau, Settsass, Sella and Marmolada. The whole area is covered with the remains of trenches, military outposts, tunnels and other constructions dating back to the Great War. This is the start of an evocative historical visit to the walkways excavated into the rock and trenches protected by stone walls and reinforced by timber supports, now completely reconstructed thanks to the superb restoration work. There are many outposts, tunnels and historic locations to be visited. Don’t miss the famous “Sphinx”, a particularly spectacular military outpost excavated inside a fortified tower, whose profile recalls a sphinx, suspended over a sheer drop. It is also worth visiting a series of steep, narrow passages, equipped with steps and cable (a head torch and helmet are required) that lead to the outposts facing the south face of Sass de Stria. Here you will see parts of the mountings for the Austrian machine guns, and you can enjoy the superb views of mounts Marmolada and Col di Lana through the slit windows.

From here, you can continue the ascent towards the summit, where the last section is slightly more difficult. You will enter a deep vertical cleft in the mountain, where a short, easy section of the track has been equipped with a series of metal and wooden steps that help you climb the last rocky step. Once you have completed this cramped and narrow path, you will emerge onto the sunny peak of Sass de Stria at 2,477 metres. From the summit you have a 360° view over the Ampezzo Dolomites, Marmolada, the Sella group and Col di Lana. There are also superb views from above of Passo Falzarego, a beautiful Dolomitic Pass, and onto the Valparola Pass and the incredible wartime fortifications of the saddle near the secondary summit of mount Sass de Stria.

Return to Forte Tre Sassi following the same route taken for the ascent.

By car: Take the state road 48 towards the Falzarego Pass, and, after passing the Mount Lagazuoi cable car, turn right towards the Valparola Pass. In a couple of minutes, you will reach Forte Tre Sassi, on the left, where you can park.

By bus – Dolomiti Bus operates a route to the Falzarego Pass that leaves from Cortina bus station. The last stop on the route is at the Pass. From here, to reach Forte Tre Sassi, you can take bus 465 towards Corvara operated by SAD, or walk, making the hike 30 minutes longer than the time shown. It is a good idea to check bus times on the Dolomiti Bus and SAD websites when you are planning the trip.

This walk should be avoided in conditions of rain or snow, when the steps in wood and metal on the path up to the summit may become slippery.
Share on:

A head torch and helmet are recommended for the (optional) visits to the tunnels.