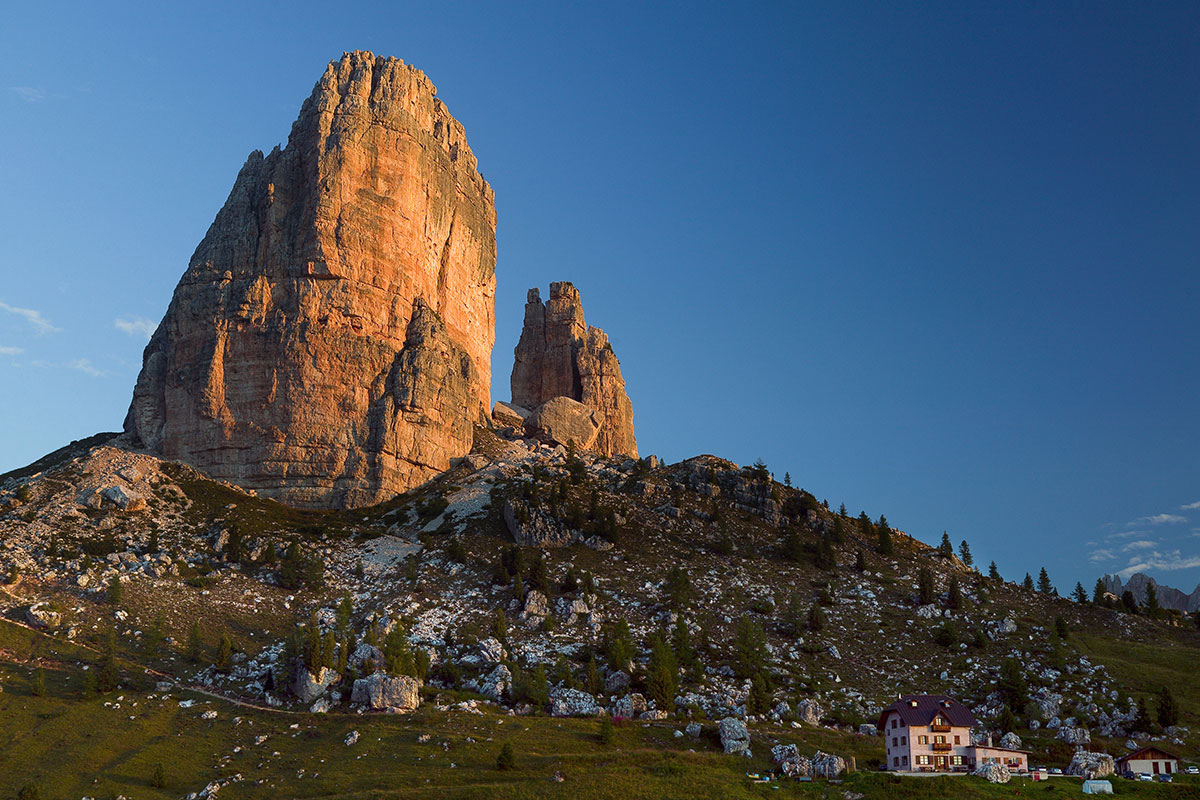 Walk to the lodge Rifugio 5 Torri

From the car park, walk towards the lower station of the Cinque Torri chairlift and follow the track, which is a ski piste in winter, on the left of the lodge Rifugio Bai de Dones. Carry on until you see the sign marking track n° 424 and follow it across a marshy area and then soon into the forest. Along the track you will have a series of views of the majestic Tofane mountains, on your left, and you will enjoy the peaceful, refreshing setting. At the intersection, take track n° 425 which in about an hour and a half leads you to the mountain lodge Rifugio Cinque Torri, in a setting of rugged beauty at the feet of the Cinque Torri peaks. From here you will have exceptional views towards the mountains Croda da Lago and Lastoi de Formin, and further beyond, mounts Nuvolau and Averau, silhouetted on the horizon.

Opened in 1904, Rifugio Cinque Torri is one of the oldest historic lodges in the area, and it has an authentic family atmosphere. Over the years, it has been visited by rulers and princes from all over the world, such as King Victor Emmanuel III, and still today it is frequented by climbers of international standing. A few hundred metres away there are the trenches of the Open-Air Museum of the Great War, and the Cinque Torri climbing wall, the best-known and most historically important wall of Cortina. Cinque Torri can justifiably be considered as a natural monument, and, with over 200 equipped pitches of varying difficulty and length, it can be considered as amongst the classic rock climbing faces in the Dolomites and the Alps. To experience an early 20th-century atmosphere, when climbers from all over the world began to discover the wonders of the Dolomites, it is well worth sitting down at the table and tasting the recipes of times past, snug in the warmth of the large majolica stove. Unmissable specialities include the traditional “casunziei”, half-moon-shaped ravioli with a red beetroot filling, and the ricotta cheese strudel.

There are two ways of returning from Rifugio Cinque Torri: by retracing your steps, or by walking uphill to Rifugio Scoiattoli in about 30 minutes to enjoy the sight of the Cinque Torri from another viewpoint, then taking the Cinque Torri chairlift which will take you back down to the car park in comfort.

By bus: From the bus station in the centre of Cortina, take the bus operated by Dolomiti Bus towards Passo Falzarego (check the times in advance) and get off at the stop at the Bai de Dones car park, near the chair lift to Cinque Torri.

By car: From the centre of Cortina, take the state road towards Passo Falzarego. After the hamlet Pocol, about 20 minutes from the town centre, drive for a few more kilometres and then turn left onto the road marked by a large sign for the Bai de Dones car park, which is near the chair lift running up to Cinque Torri.

As an alternative, instead of going back down on tracks n° 425 and 424, you can take the road leading to the lodge Rifugio Scoiattoli and take the chair lift down.