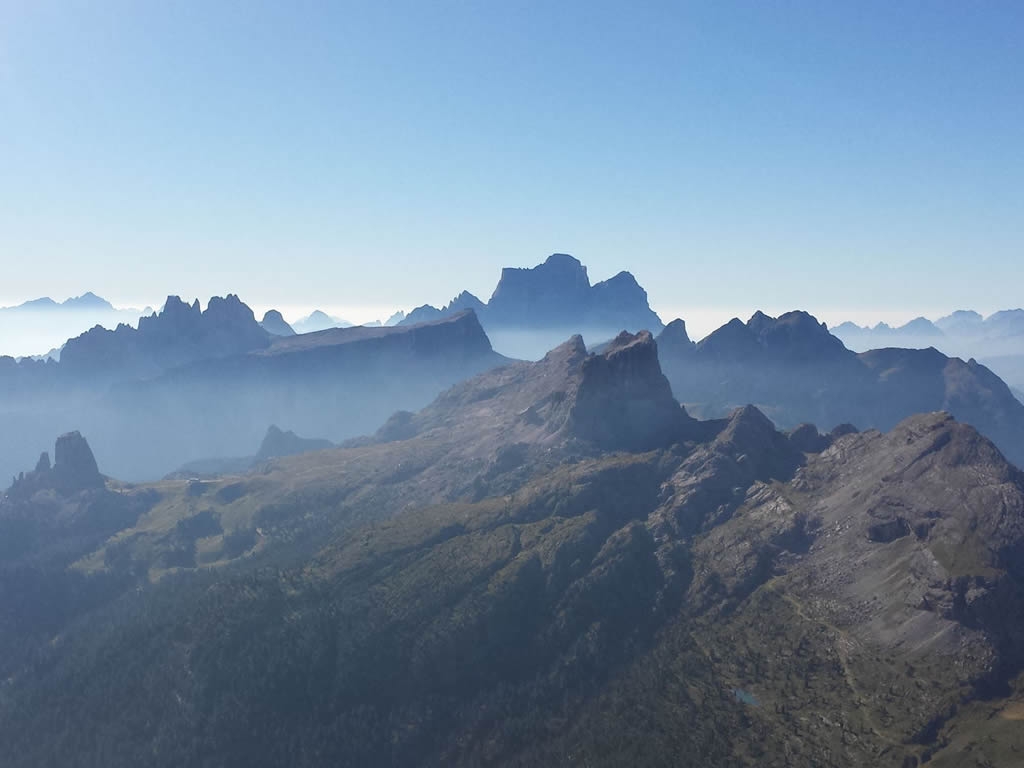 The Galleria del Lagazuoi via ferrata is an essential part of a mountain-lover’s portfolio, because it is unique in its category and at certain points it provides the chance to experience episodes of the Great War in the Dolomites. The itinerary will enable you to understand the enormous toil and suffering undergone by the troops. The famous helical tunnel was excavated during the First World War by Italian soldiers, who, starting from the Cengia Martini ledge, dug tunnels inside the Piccolo Lagazuoi mountain, in order to take the Austrian soldiers stationed at the top by surprise.

To reach the start of the via ferrata from the Falzarego Pass, take the Lagazuoi cable car, or if you prefer to hike up, starting from the Falzarego Pass, take track n° 402 which will bring you to the saddle Forcella Travenanzes, and from there take track n° 401 until the cable car top station. The walk up takes about two hours and it is somewhat challenging in the first section. Lastly, you can also go up using the Kaiserjäger equipped trail, which ascends along the opposite side of Monte Lagazuoi. If you would like to complete the wartime routes by visiting the Austro-Hungarian emplacements as well, you cannot miss taking the Sottotenente Fusetti via ferrata on Sass di Stria.

Once you have reached the cable car’s top station at the summit of mount Lagazuoi, it is well worth visiting the magnificent mountain lodge Rifugio Lagazuoi, whose terrace offers an enchanting view; in addition, in just a few minutes, you can reach the top of Piccolo Lagazuoi. Lastly, on booking, you can listen to a historic re-enactor wearing the uniform of the III Tiroler Kaiserjäger Regiment, who will explain the historic episodes that took place during the First World War on mount Lagazuoi, the theatre of clashes between the Italian and Austro-Hungarian armies.

From the lodge, return to the cable car’s top station, where you will see signs for the start of the track leading to the tunnels. After a short stretch on the track, you will see a sign marking the entrance, and the beginning of your adventure in the tunnels, with constant protection assured by a wire cable. You need to have a ferrata kit, gloves and helmet, which are essential because some parts of the tunnel have very low ceilings, and as there is little light, it is also mandatory to have an electric torch or headlamps because in some sections the tunnel is very dark, lit only by a number of windows that offer spectacular views of Cortina, but that are insufficient to provide light for the entire distance.

During the descent on steps excavated by hand by the troops, you will see many locations at which there are historic items with detailed descriptions, and many historic curiosities. In addition, there are some places where you can leave the gallery for a short distance, or admire the view through the windows carved in the rock.

Before reaching the end of the route, you can exit onto the historic Cengia Martini ledge for an additional stretch, which is particularly interesting for its historic importance and for the views that it offers. You will also see some wooden habitations set into the rock, and these can be visited.

After you have seen the Cengia Martini ledge, return to the tunnels, and in a few minutes you will reach track n° 402, which will bring you back to the Falzarego Pass following the same route that you took during the outward section.

The via ferrata equipment: helmet, harness, appropriate climbing gloves and the via ferrata kit. It's necessary to have a frontal lamp.