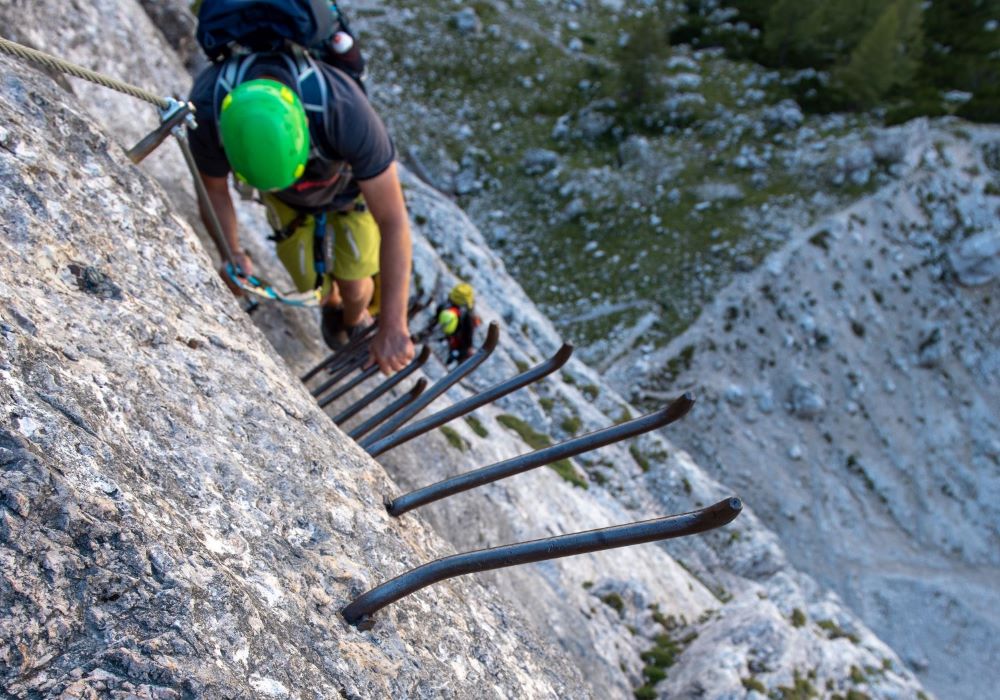 Scala del Minighel is the oldest via ferrata in Cortina d'Ampezzo, built in 1904 by the manager of the mountain lodge Rifugio Von Glanvell in Val Travenanzes. Today the lodge no longer exists, as it was destroyed during the Great War. It was built because the lodge’s manager wanted to have more customers, and so he had the idea of installing a via ferrata that would speed up trips to and from the Rifugio Giussani lodge. During the First World War the Italian soldiers bent all the pegs so that the Austrians could not use them to cross the saddle, but in the 1960s, Cortina’s Mountain Guides worked tirelessly to restore them to functionality, retaining the original pegs.

From Cortina, follow the state road SS48 towards the Falzarego Pass, go past the La Locanda del Cantoniere restaurant and the small church of Vervei, and carry on for about 500 metres until you reach the junction on the road at Fedarola, and then follow the road towards the Rifugio Dibona mountain lodge. The second part of the road is a dirt track, but it is in good condition. From the Rifugio Dibona lodge, take track n° 403 towards Rifugio Giussani and then track n° 404 which will lead you along the foot of the majestic Tofana di Rozes until you reach the saddle Forcella Col dei Bos.

Carry on along track n° 404 to the intersection, where you follow the signs for Scale del Minighel, taking you towards the right. From the intersection you will reach the start of the steps in just a few minutes, a very short distance from the lovely waterfall Cascata delle Tofane, whose flow is particularly abundant in spring and early summer due to the meltwater from the snow.

This via ferrata is unique in its category: the pegs in the rock run up the entire ridge right up to the summit, and it is easy to understand why it is one of the most famous via ferratas of all. The 270 pegs and the metal cable accompany you for 70 metres along the rock face, enabling you to enjoy one of the most evocative views of the Dolomites, over the wild Val Travenanzes valley. In several points there are ledges where you can rest, enjoying the waterfall and the unspoilt landscape.