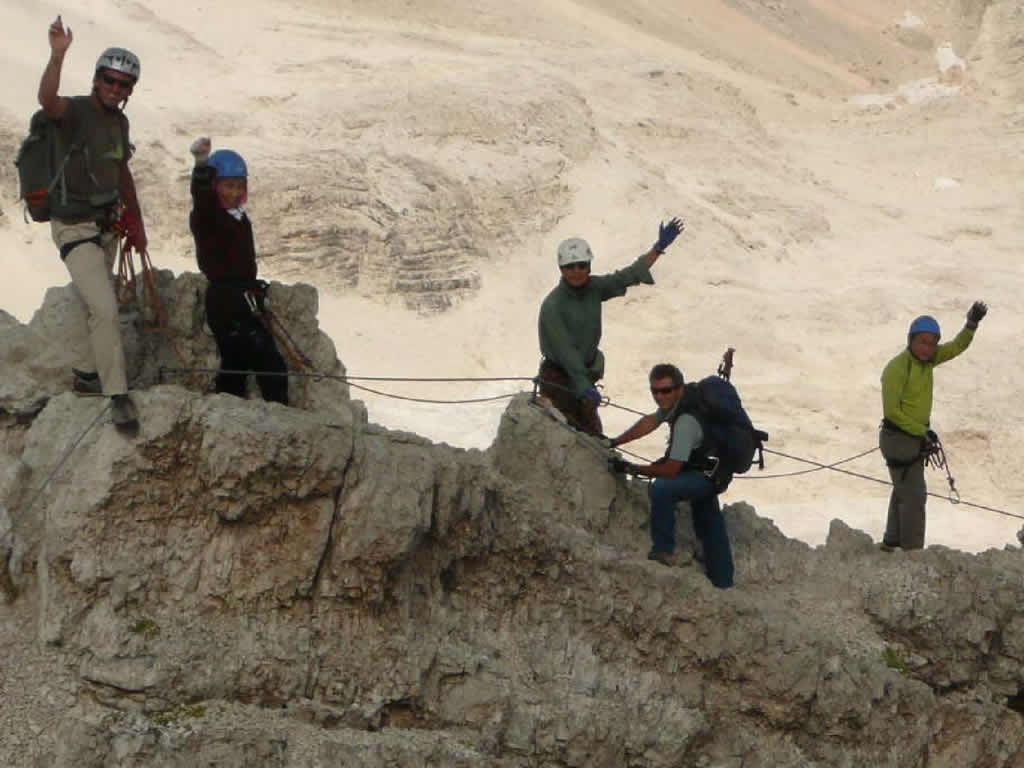 A via ferrata of medium difficulty that ascends Punta Ovest of Forame in the Cristallo group, with a series of exposed sections and emplacements dating back to the First World War. The relatively lonely route provides an intense experience steeped in nature and history.

From Cortina, head towards the Rifugio Ospitale mountain lodge at 1,434 m, on the Cortina-Cimabanche state road; you will find a car park there. From the restaurant, walk down the track leading to the Cortina-Dobbiaco cycle path, which you follow towards Dobbiaco until you have crossed a wooden bridge. Here, in the hamlet Pian del Forame, on the right you will see a sign to the start of the track.

The track runs steeply in the forest, and on the way you will see some military shelters dating back to the Great War. You emerge at the rock line at a junction, with fine views of Croda Rossa, Tofane and Cristallo. Here, follow the signs that lead you to the start of the scree slope which takes you to the bottom of the via ferrata named after Renè de Pol.

The first section is a short traverse towards the left. The metal cables lead to a “black rock face”, which, with clefts, metal steps and a number of exposed sections, will bring you to a ledge built in times past for military functions, bearing witness to the historical episodes hallmarking the Ampezzo Dolomites.

Follow the ledge until you reach a chimney, the most challenging part of the ferrata that in any case is not excessively difficult. You climb the chimney on the left-hand side, with some slightly athletic moves in which you are helped by metal pegs and cables. Then the via ferrata runs for about twenty metres across a rock slab, climbing upwards and towards the right. After this, you will reach the last section of the via ferrata, which ends with a climb up a gully strewn with rocks until you get to a track leading to the summit of Punta Ovest on Forame, part of the Cristallo group, at 2,318 m. From here you can enjoy a magnificent view of Croda Rossa d’Ampezzo, Monte Cristallo and Popena.

This via ferrata is not very busy, and so if you like the idea of an immersion in nature and history, this is the perfect route, and the views of Cristallo and the surrounding peaks are incomparably beautiful.

To return, you have to go down on the side opposite the way you came up, following a steep track that will bring you first to the saddle Forcella Gialla (2,400 m), reached by a scree slope, and then Forcella Verde (2,380 m), after ascents and descents on the ridge. During the downhill section on the ridge, you will see a number of military emplacements dating back to the First World War, built on the mountain crest. From the Forcella Verde saddle, take track n° 233 which runs downhill and takes you to the Cimabanche Pass. From here, follow the cycle path towards Cortina until you reach the Rifugio Ospitale Restaurant.

Alternatively you can take a bus from Cimabanche to Ospitale, or you can make arrangements to have two cars, leaving one at Cimabanche and one at Ospitale.

This route is not particularly difficult in the ferrata sections, but as it is a long and fairly remote itinerary, it is important to plan the trip thoroughly and avoid setting out in uncertain weather conditions.
Share on: