Cortina, the Queen of the Dolomites, inspires passionate love stories, today just as yesterday, in cinema fiction just as in real life, by virtue of its unique atmosphere and its majestic natural setting. 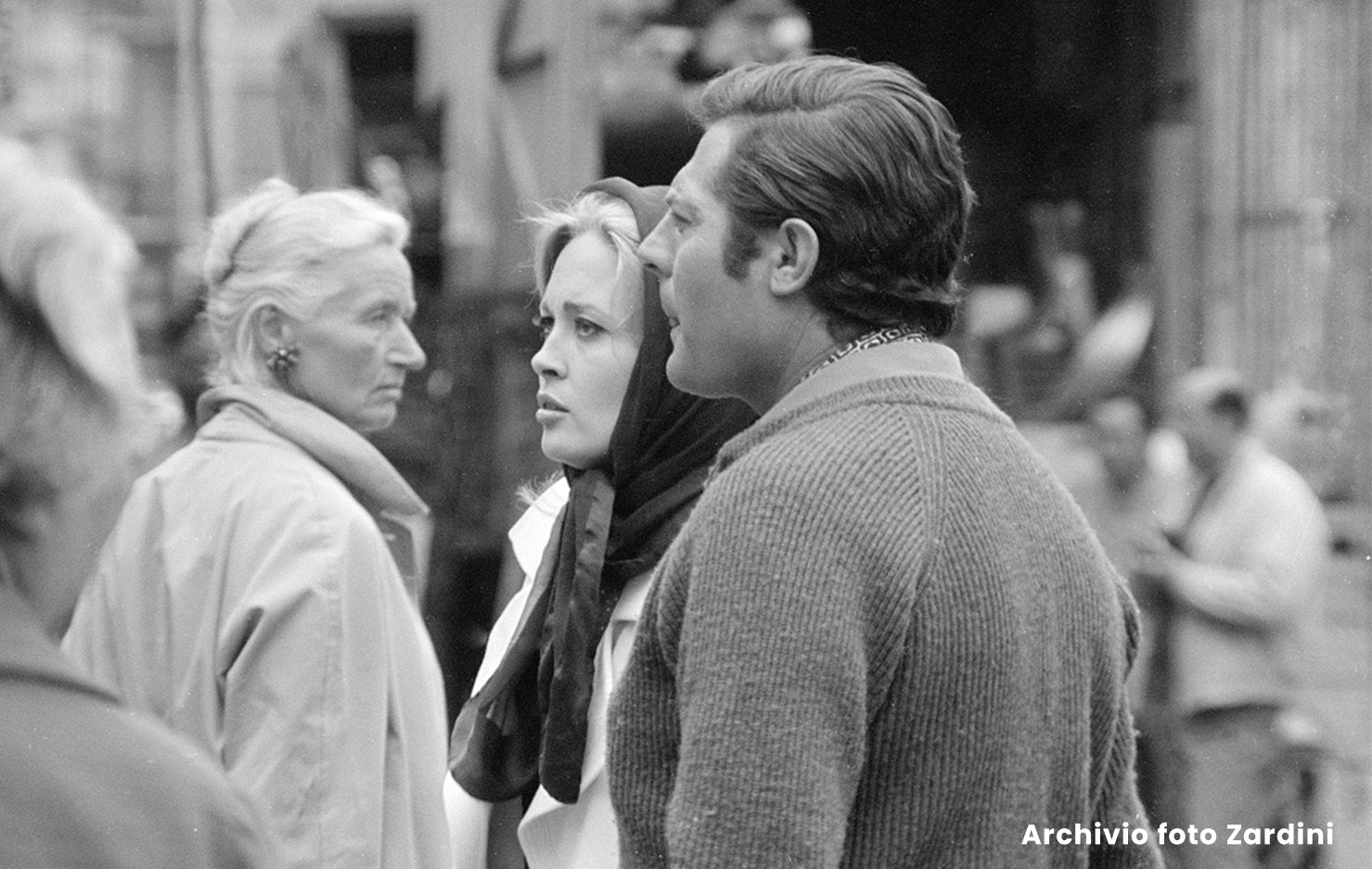 "A Place for Lovers", from the town center of Cortina to its mountain refuges.
One of the films in which the love story between the two stars – the film’s principal theme – did not end when filming was over is A Place for Lovers (1968, directed by Vittorio De Sica), set mainly in Cortina.
It was during the filming for this romantic, dramatic movie that the two stars, Marcello Mastroianni, unforgettable Italian charmer, and Faye Dunaway, famous American actress, met, and fell in love. The story has been told by Enrico Lucherini, one of the press agents who was present in Cortina at the time, in the book “Set in Cortina” (edited by L. Damiani, 2010, Mondadori Electa). “Once, when we were filming a love scene, they went on kissing passionately even after the director had called “Cut!”. It went on for a year, it was much more than just a brief affair”.

...Unfortunately, not all love stories have a happy ending, above all when the lovers are playing a dangerous game. In fact, at that time Mastroianni was already married, and his romance with Faye Dunaway came to an end, though the two never forgot their love story which began in the magical Cortina.

Many locations in the Ampezzo valley were used during the filming for A Place for Lovers, such as the Alemagna road taken by the two characters Julie (Faye Dunaway) and Valerio (Marcello Mastroianni) to reach Cortina, location of their romantic getaway where they would live a few days of idyllic love.

The town centre of Cortina also appears often in the film, in scenes set on Piazza Roma and at the church Basilica dei Santi Filippo e Giacomo, seen when Valerio reaches the town looking for Julie after waking up to find that she is no longer next to him. Another setting seen in the movie is the exterior of Hotel Ancora right in the town centre, on Corso Italia, just behind the church. It was here that Julie told Valerio that she loved him, before returning to the chalet with him.

Malghe di Fedarola, a series of Alpine farm buildings in a location named Dibona on the track leading to the Dibona lodge in the Tofane mountains, were converted into the chalet in which the two lovers stayed. Isolated, immersed in a setting of pastures and forests, the chalet is close to another, much less luxurious Malga, where, in the film, a young Alpine girl lives with her grandfather.

One of the excursions taken by the two lovers during their idyllic stay is the cable car leading up to the mountain lodge Rifugio Lagazuoi, on the Falzarego pass. The lodge can be seen in the shots set on the panoramic terrace, where Valerio films his lover, and in sequences taken from the cable car’s top station, providing clear views of the lodge just a short distance away. 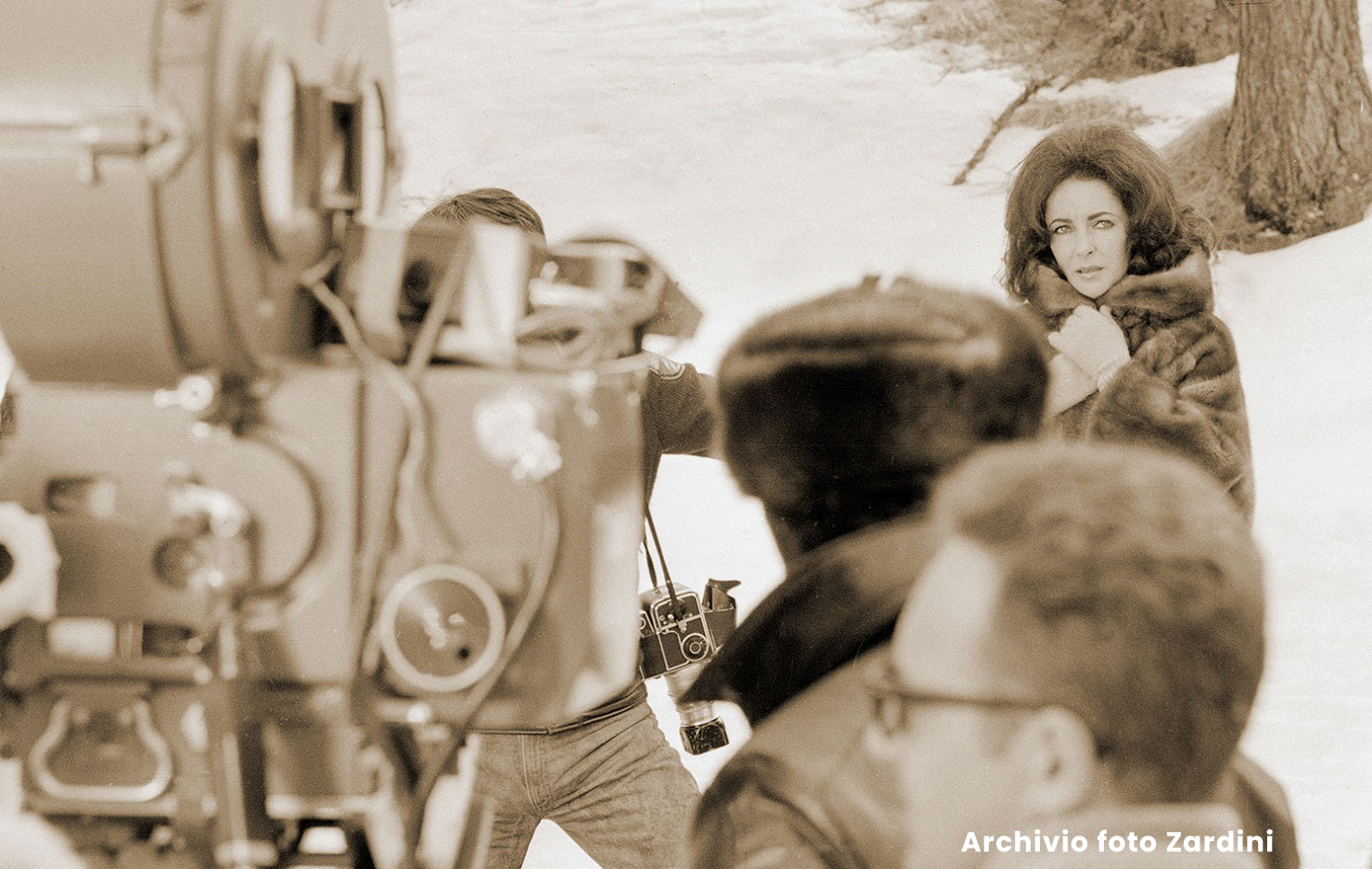 Just five years after A Place for Lovers, Cortina was chosen yet again as a film set for a dramatic love story, and this time, the starring role was played by the celebrated Elizabeth Taylor.
In this film, titled Ash Wednesday (directed by Larry Peerce, 1973), Liz Taylor plays Barbara Sawyer, a middle-aged American wife willing to do anything to reconquer the love of her husband (Henry Fonda), even undergoing cosmetic surgery in order to regain her youthful beauty.
Liz Taylor visits the snow-clad Cortina for a stay, impatiently waiting for her husband’s arrival and hoping to rekindle his love as soon as he sees her. 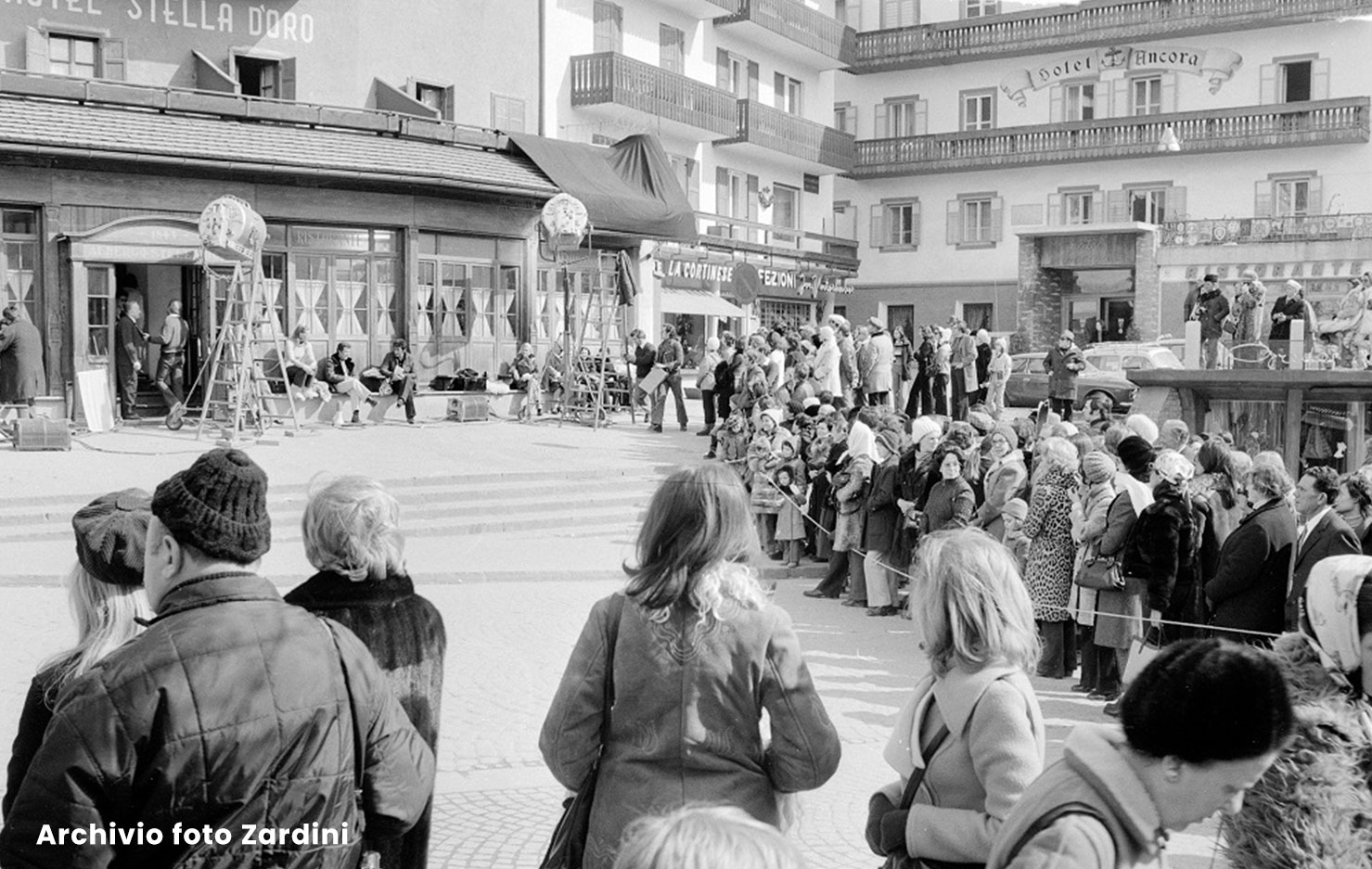 "Ash Wednesday": Liz Taylor at the Miramonti Majestic Grand Hotel and at Rifugio Col Drusciè.
... During her wait, the sad wife spends her days wandering aimlessly in the town and on the snowy slopes. For example, the famous panoramic terrace of the Col Drusciè lodge in the Tofane mountains is easy to spot. Liz visits the location and sips a hot beverage surrounded by happy skiers enjoying the sun and the splendid views of Cortina.

The place in the Ampezzo valley that appears most often in the film is Miramonti Majestic Grand Hotel, one of Cortina’s historic 5-star hotels, located in the hamlet named Peziè and founded in 1902 by Romeo Manaigo and his wife Filomena with the intention of creating a luxury Alpine tourist resort. It is here that all the main characters stay, including the magnetic star Liz, and Erich (Helmut Berger), her youthful lover for one night, whom she meets in the hotel’s restaurant. 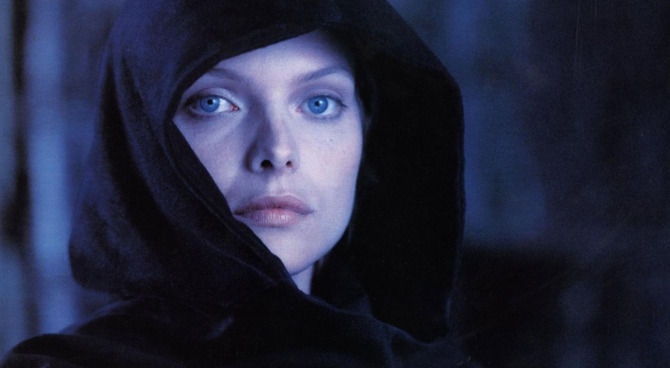 "Ladyhawke": Michelle Pfeiffer, the Giau Pass and its frozen lake
Luckily, not all romantic films have a dramatic epilogue. On the contrary, some of them enable us to dream of true love by means of their ending, “… and they lived happily ever after”.
These tales of love include the adventure film Ladyhawke (directed by Richard Donner, 1985), set in a French medieval fantasy land, in which the love between the chivalrous knight Etienne Navarre (Rutger Hauer) and the beautiful, courageous Isabeau of Anjou (Michelle Pfeiffer) is thwarted by the curse of a jealous bishop (John Wood) who turns the warrior into a wolf during the night and Isabeau into a hawk during the day, so that they are “always together, eternally apart” (to quote Phillippe, alias Matthew Broderick).

Though set in France, the film was entirely shot in a number of Italian locations, including the Giau Pass. The pass is famous both for its splendid view over Cortina and the Ampezzo valley, and for its trekking paths. It is also familiar as a particularly tough stage of the Giro d’Italia cycle race. In the film, Isabeau, young Philippe and the monk Imperius (Leo McKern) prepare a trap to capture Navarre while he is in the form of a wolf. While Philippe and Imperius are digging a pit, Isabeau waits for the wolf to arrive, but it falls through the ice of a frozen lake and has to be rescued.

These shots were filmed on the Giau Pass, and you can see the mountain group Lastoi de Formin, in addition to Monte Cernera, Monte Nuvolau and Tofana di Rozes. The lake in fact does not exist: it was excavated specially for the film production and filled in again straight afterwards. Giovanni Natalucci, art director, said, “We dug a small, shallow lake, backfilling it as soon as we had finished (today we would be arrested!); but as it didn’t freeze during the night, we had to make the ice using a synthetic material”.

Use the Location Map to find the recommended places more easily.

Here are some of the locations frequented by the film stars of the past, come and visit them! 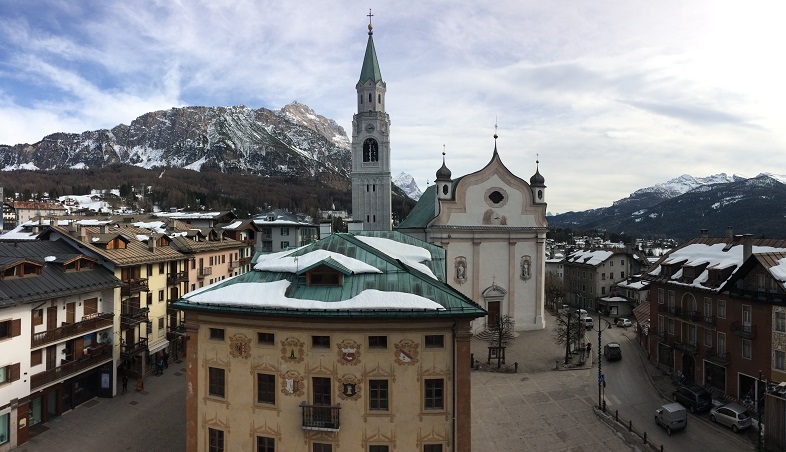 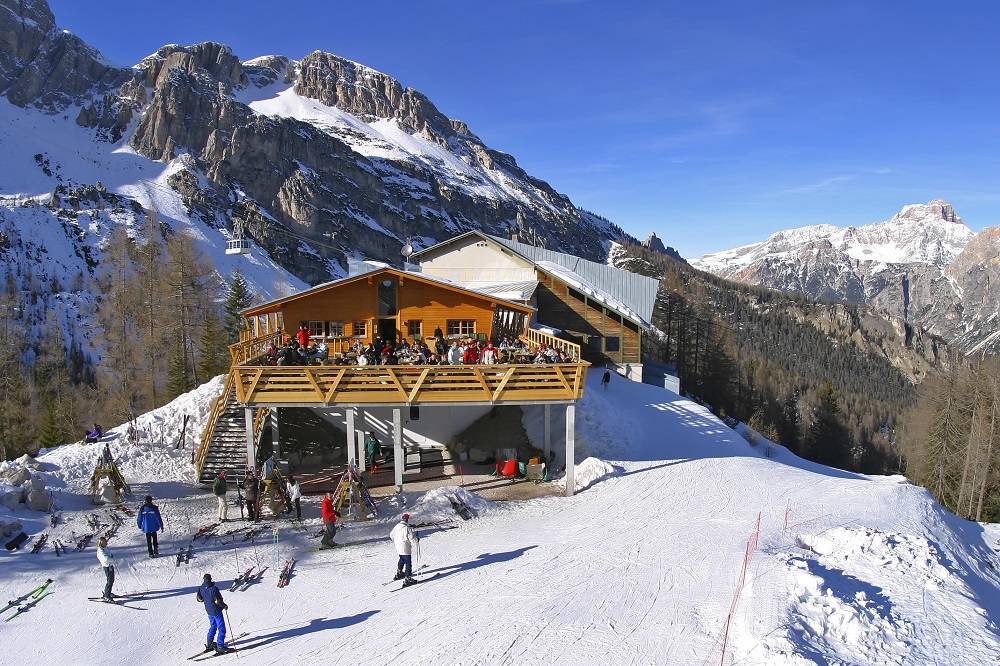 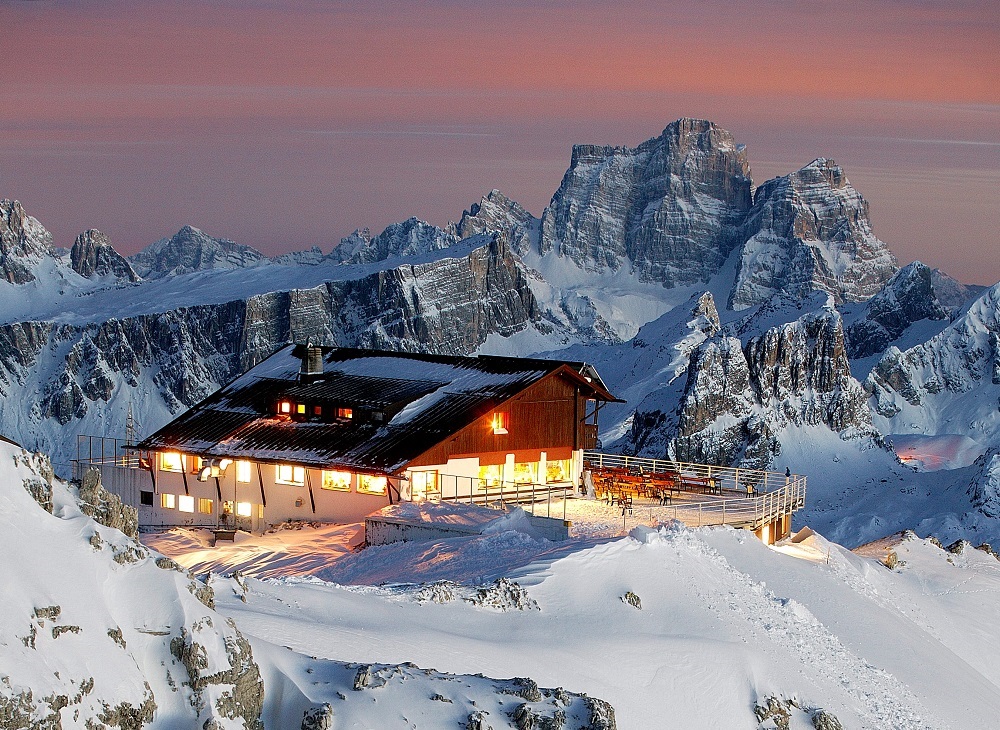 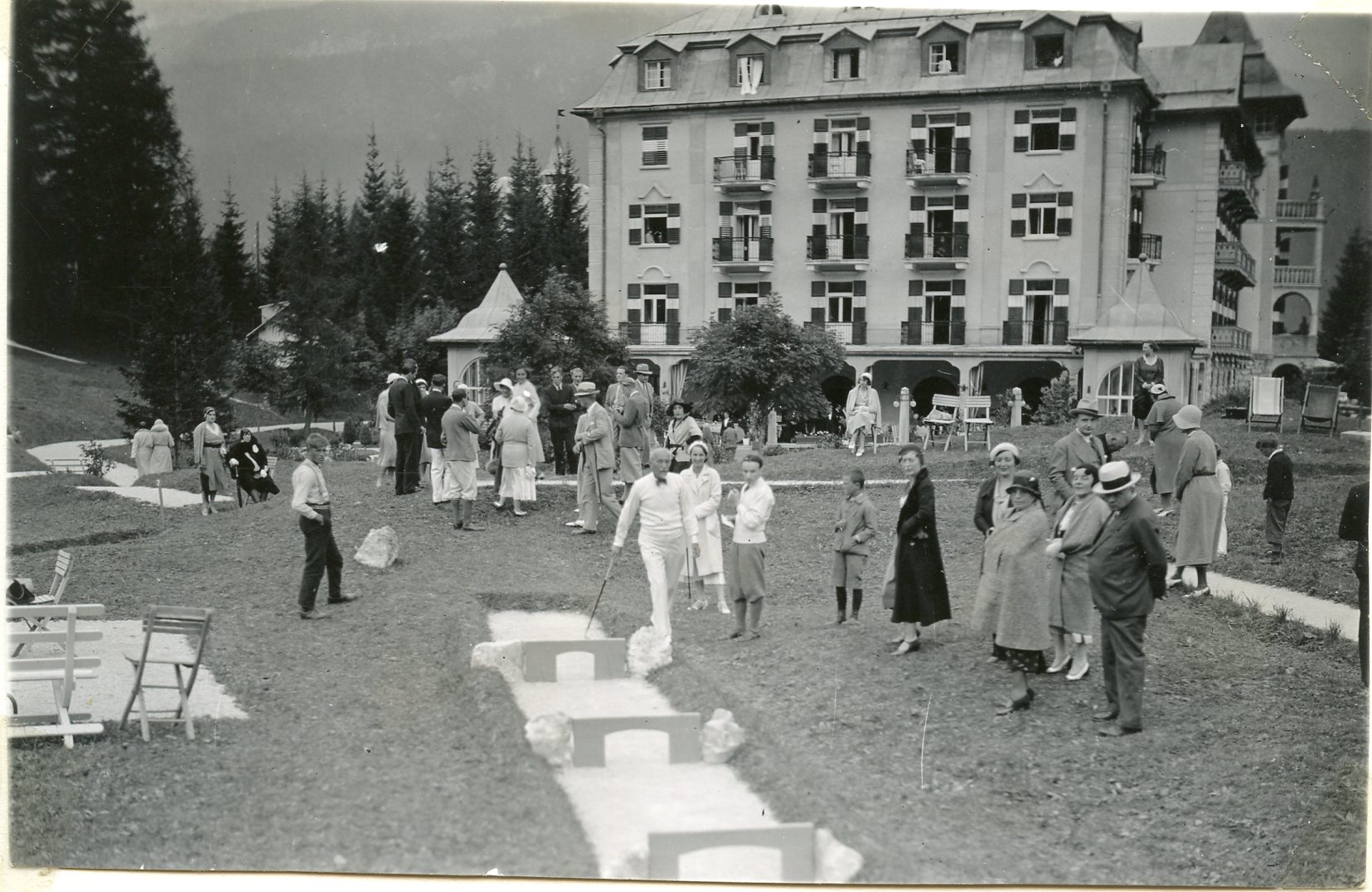 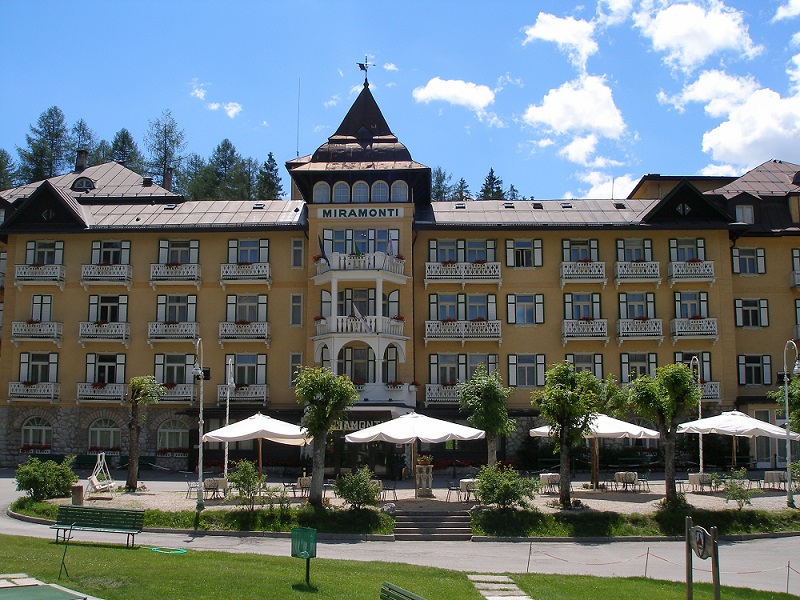