The imposing Ampezzo Dolomites, the dense mountain forests, the many ski pistes and the historic Olympic facilities have attracted many Italian and international cinema production companies to Cortina d’Ampezzo in order to make action and adventure films, some of which were actually set there.

The earliest feature-length films for which Cortina provided the perfect set for adrenaline-charged sequences date back to the 1920s. They include a 1926 silent movie titled Il gigante delle Dolomiti (The Giant of the Dolomites, directed by Guido Brignone) in which the hero was the famous “gentle giant” Maciste, played not for the first time by the actor Bartolomeo Pagano (this was one of his last appearances on cinema screens). In this film, Maciste is a Mountain Guide who fights the villainous plans of two criminals, preventing a serious theft and protecting his family and friends, eventually succeeding in bringing peace back to the valley. The film was restored and provided with a musical commentary in 2010, and it represents a particularly significant historical visual record of the Dolomites, of the sports activities performed, and the equipment used, at the time. In fact there are some climbing sequences, such as the dangerous race on the face of the Cinque Torri peaks, between Maciste and the treacherous Mountain Guide Schultz, in addition to ski chases through the forest 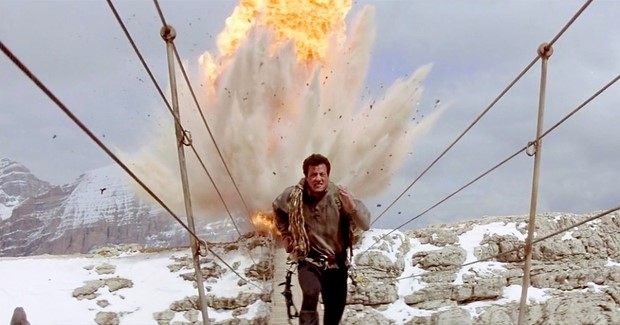 Cliffhanger
The Dolomites are considered as a paradise for climbers from all over the world due to their unique characteristics, as demonstrated by the 1993 cinema appearance of the film Cliffhanger (directed by Renny Harlin). This American production was filmed almost entirely in the Dolomite mountains, and starred the muscular Sylvester Stallone.

Even though filming took place in various parts of the Dolomites, including the Ampezzo valley, the movie is actually set in the North American Rocky Mountains, and Stallone does not play the part of a Mountain Guide (as in the case of Maciste), but rather the intrepid climber and rescue ranger Gabe Walker. At the start of the film, Gabe is forced to see his friend plunge down into the abyss after having tried to save her, and later he has to confront a gang of ruthless criminals searching for three suitcases full of money lost in the mountains. The film succeeds in keeping spectators on the edge of their seats, as every true action movie should do, and so it was very successful and received nominations for three Oscar awards.

Various mountain locations in the Veneto region were used to shoot the movie. One of the sites that particularly caught the public’s attention was the spectacular suspension bridge, which not only actually exists (it is on the Ivano Dibona equipped climbing route in the Cristallo group), but it was really blown up in 1992 as part of the screenplay, and was then immediately rebuilt.

The film also includes Mount Faloria and the building that was once the top station of the Faloria cable car and that in the film becomes a mountain lodge. In fact, when Gabe succeeds in escaping from the gang of criminals who had captured him and his colleague Hal Tucker (Michael Rooker), and after having been forced to climb a steep rock face without any sort of equipment, not even a jacket to protect him from the cold, he takes shelter in a nearby mountain lodge, where he meets his girlfriend, rescue ranger Jessie (Janine Turner). Today, that building is known as Cliffhanger Lodge and it is part of a circular route that begins at the Faloria Mountain Lodge.

The movie’s final sequences were filmed near the Rifugio Lagazuoi mountain lodge, as can be seen from the mountains that appear in some shots, such as Tofana di Rozes and Antelao. 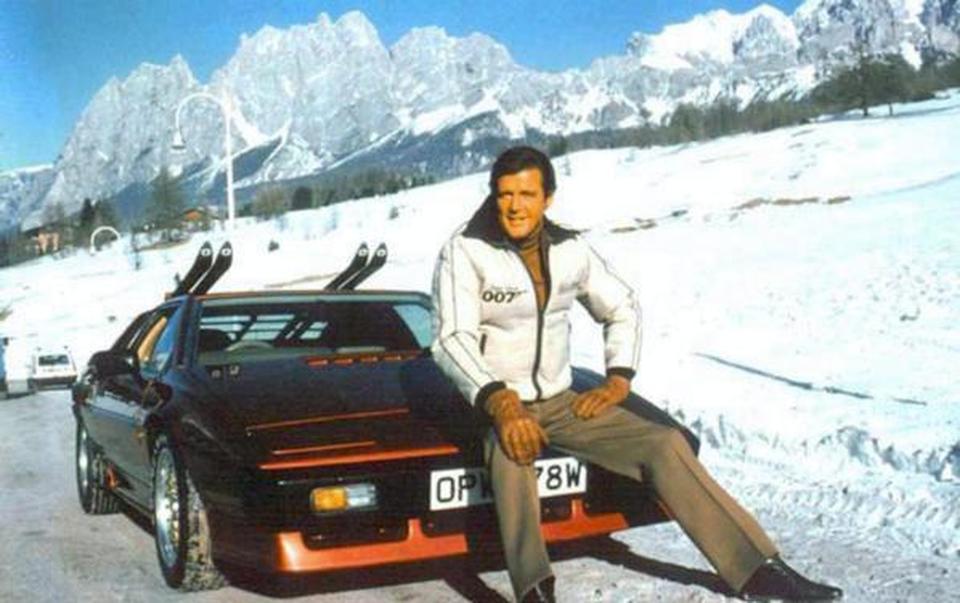 For your eyes only
On the other hand, an action movie filmed in Cortina that doesn’t feature climbing, but rather provides a view of all the winter sports practiced in the Queen of the Dolomites in the early 1980s, is For your eyes only (directed by John Glen, 1981), the twelfth chapter in the saga dedicated to Agent 007, James Bond. In this film, Bond is played by Roger Moore, who would star in this role for a total of seven films.

Much of this film was shot in Cortina d’Ampezzo, chosen both for its glamorous image, perfectly suited to the sophisticated Agent Bond, but also for the wide range of Olympic and sports venues offered by this location, making it perfect for a secret mission with a high content of action sequences. Agent 007 visits the Ampezzo valley on the tracks of the criminal Locque, and the plot is developed principally in the area: Hotel Miramonti, the high-altitude Bar Cima Tofana, Corso Italia and the Ice Stadium become the glamorous settings for encounters between spies and for exchanges of information, and in some cases, unforeseen, frenetic attacks on 007 by his enemies. Cortina becomes the stage for intrigue, action and danger, though set against a backdrop of idyllic beauty that is a perfect match to James Bond’s inimitable style: he is a gentleman more at home in exclusive sports and luxury hotels than in squalid slums, where not even his enemies would like to move.

The many dramatic action sequences are remarkable for their frenetic rhythm and the way in which they include a whole range of sports that can be practiced in Cortina d’Ampezzo: downhill skiing, biathlon, bobsleigh racing, ski-jumping on the Olympic hill, ice hockey and ice-skating. Even Corso Italia, normally the scene for leisurely strolls and shopping on the part of tourists, becomes the location for dangerous chases and shoot-outs. Point Break
Lastly, more recently, the Falzarego Pass was used for a film whose spectacular extreme sports scenes were its strongest feature: Point Break (directed by Ericson Core), a remake of the original Point Break filmed in 1991 with direction by Kathryn Bigelow, and with stars of the calibre of Keanu Reeves and Patrick Swayze.

The remake received its cinema release in 2016 and, even though it has the same title as the original, it contains many differences both in the plot and in the construction of the personalities. Overall, the remake did not receive the same degree of critical and public acclaim as the original.

One of the differences in the remake is in the number of locations and the extreme sports included both in the story and in the actual sequences: in fact, while in the 1991 film the most important sport was surfing, accompanied by sky-diving, with filming performed in the United States, in the 2016 remake, the sequences were shot in various locations all over the world, at which the protagonists are engaged in various extreme sports in the quest to complete Ozaki’s Eight Ordeals, thus reaching a state of enlightenment and communion with nature.

There is no lack of mountain locations, and one of these is in fact the Falzarego Pass, in addition to Mount Lagazuoi. In the film, Bodhi (Edgar Ramirez) and his group, accompanied by the FBI undercover agent Johnny Utah (Luke Bracey), plan on sabotaging the transport of gold from a mine by causing a rock avalanche, in order to return what man has subtracted from nature back to its rightful place. The sequence before the attack on the convoy of trucks, in which Bodhi persuades Utah to take part in the mission after having shown him the mine from above, was filmed near the Lagazuoi Mountain Lodge (the mountains Tofana di Rozes and Lagazuoi can be seen from the aerial shots). The Falzarego Pass and the Dolomites Road that runs across it provided the location for filming the dangerous motocross bike chase down the mountain that ends in the heart of the forest, at which point Utah, frustrated about not having been able to shoot Bodhi when he had the opportunity, fires into the air and shouts (a tribute to the preceding Point Break in which the agent Utah does the same thing after having pursued Bodhi through an entire residential district).

MAP OF THE LOCATIONS

Come and discover Cortina d’Ampezzo’s sports opportunities and experience an adrenaline-filled adventure on the tracks of Sylvester Stallone, Maciste and 007!

Activities all year round