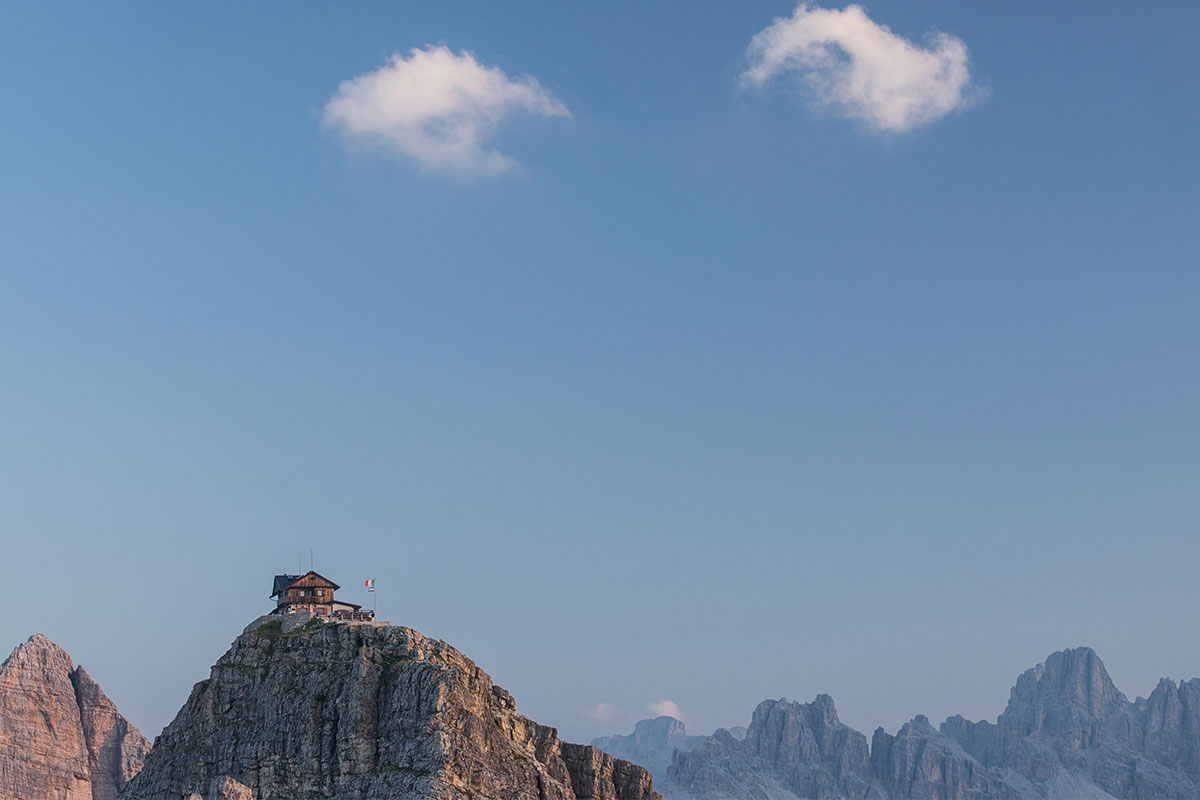 From the Giau pass car park, take track n° 443: on your left you will see the rocky face of Ra Gusela, and on the right the profiles of Croda da Lago and Lastoi de Formin. The path varies greatly, partly running through the forest, and partly across open ground with many viewpoints. In about an hour the track winds steeply up the mountain Crépe dei Ronde, and when you reach the top, you will find an open space from which you can see the Cinque Torri peaks and the mountain lodge Rifugio Cinque Torri. You can choose whether to pass right alongside them, or stay further left and climb directly uphill to the lodge Rifugio Scoiattoli; in both cases you will reach track n° 439, which you should follow until you reach the Rifugio at the height of 2,255 m, from where there is a superb view onto the Cinque Torri group. From here, stay on track n° 439 until you reach Rifugio Averau, with panoramic views over Cortina on the way. From Rifugio Averau, in less than an hour you can reach Rifugio Nuvolau, still following track n° 439. This mountain lodge, with an authentic, traditional atmosphere, was the first to be built in the Ampezzo valley, and it dates back to 1883. On mount Nuvolau at an altitude of 2,575 m, it offers a breath-taking, 360° view over the Ampezzo valley, with the Cinque Torri group below, and also over the Tofane mountains and the Marmolada group.

It was Colonel Meerheimb of Dresden who came up with the idea of building the refuge. He had been able to overcome a serious lung disease by staying in Ampezzo.  Therefore, he donated a contribution for the construction of the refuge to the local branch of the German-Austrian Mountaineering Alpine Club. For this reason, the refuge was initially called Sachesendankhütte (“Refuge of the Saxon's gratitude”).

After having let your eyes feast on the fascination and beauty of nature, you can return to Rifugio Averau on the same track, enjoying the views of the like-named mountain that towers impressively behind it. Rifugio Averau is also famous for its excellent cuisine, and its large panoramic terrace offers a splendid viewpoint.

From here, continue on track n° 464 towards Rifugio Fedare, walking under the chair lift suspended above the pastures and grassland of the Giau Pass. At the intersection with track n° 452, follow it and it will take you along the foot of mounts Nuvolau and Gusela del Nuvolau, and on to the Giau Pass. From here you can look up to the summit of mount Nuvolau and gaze at the eponymous Rifugio silhouetted on the skyline, a refuge for hikers, alpinists and mountain guides since 1883.

By bus: From the bus station in Cortina, take the bus towards the Giau Pass, and get off at the Pass (check the timetables published on the Dolomiti Bus website).

By car: From the centre of Cortina, take the state road towards the Falzarego and Giau Passes. After the village of Pocol (you will see the large Hotel Argentina on your right), about 20 minutes from the town centre, turn left towards the Giau Pass.