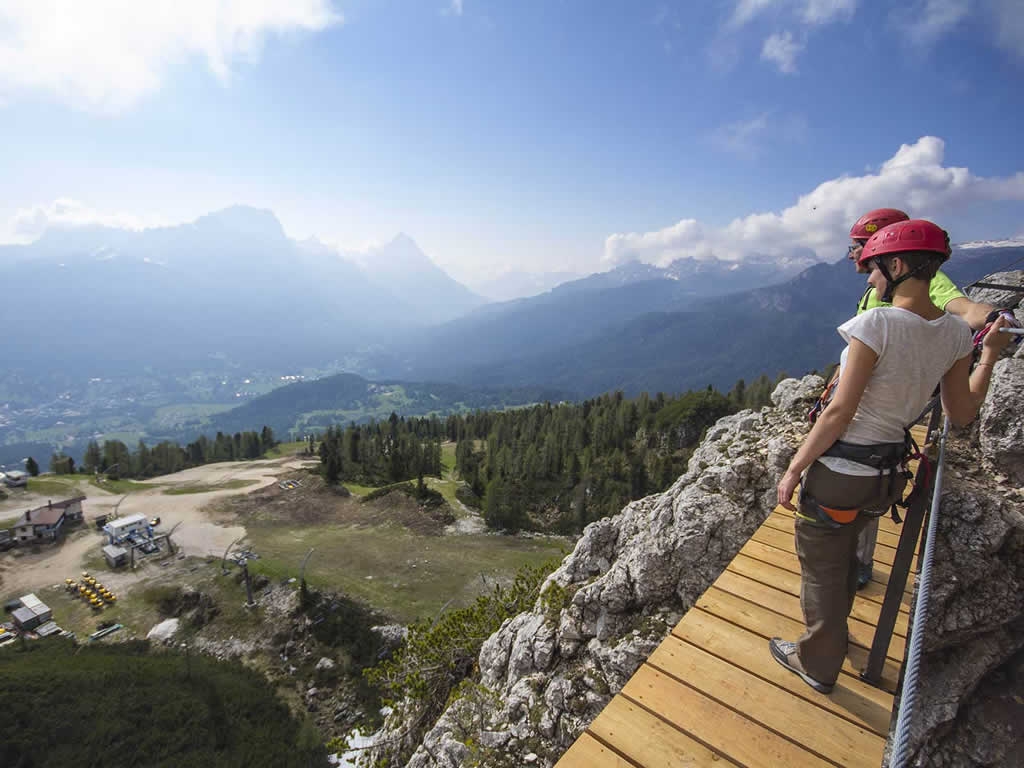 The “Ra Bujela” via ferrata was built in cooperation with the Cortina Group of Mountain Guides, and it was named after Maria and Andrea Ferrari, whose family helped pay for part of the project.

Ra Bujela is a via ferrata suitable for almost everybody, with two suspended walkways, 7 and 3 metres respectively. It climbs the whole right-hand Pomedes tower, facing the Tofana mountain. This route provides a particularly evocative view of Cortina, offering a panorama of the entire valley, including the imposing mount Tofana.

It is easy to reach the start of the via ferrata using cableways: you can get to it by means of the chair-lift coming up from Piè Tofana. In addition, close by there are the mountain lodges Rifugio Duca d’Aosta and Rifugio Pomedes where you can cool down or enjoy the culinary delicacies that they can provide.

The first section is one of the hardest parts because it is near to vertical, running across exposed slabs and arêtes, and it brings you to a viewpoint from which you can enjoy all the beauty of the Ampezzo valley. Then you carry on towards the ledge on a slightly exposed stretch, after which you reach the first suspension bridge, and soon after the second, two particularly exciting parts of the route.

Once you have crossed the bridge, you will encounter a somewhat problematic arête because it is exposed and vertical, but it is not hard to climb by means of the metal cable and additional holds. After this section, the cable forks, and by continuing upwards, you reach the mountain’s ridge and the summit at 2,257 m, from which you can enjoy the impressive view of the Dolomites, which is breath-taking every time.

The Ra Bujela via ferrata is often done together with the Ra Pegna ferrata so that you can climb both of the Stratofana Olimpica towers in a single day.