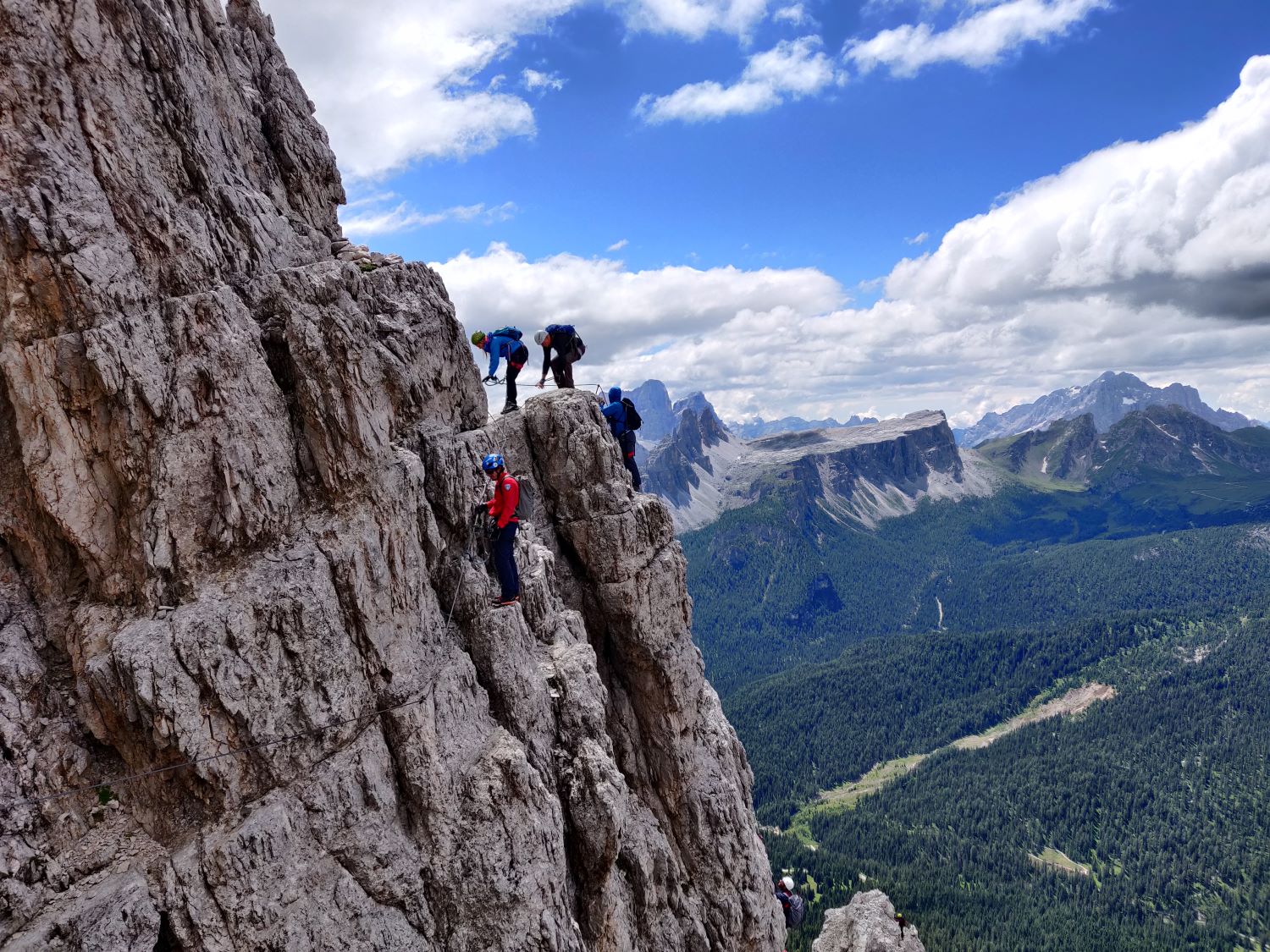 The Olivieri Punta Anna via ferrata is not exceptionally long, but it is considered as a ferrata for experts, because of some technical and exposed sequences. The ferrata climbs the buttress at the extremity of Tofana di Mezzo and, after some spectacular sections, it takes you up to 2,731 m. The view that this ferrata gives you is spectacular: a 360-degree panorama of the Dolomite mountains that will leave you speechless. This via ferrata is considered as one of the finest in the Dolomites.

From Cortina, head towards the Falzarego Pass and, before reaching the Socrepes ski-lifts, turn right and follow the signs for Baita Piè Tofana Restaurant, where there is a large car park. From here, take the chair lift that will bring you directly to the mountain lodge Rifugio Pomedes at 2,305 m, one of the oldest lodges in the Ampezzo Valley, right at the foot of the Tofane mountains.

You can also reach the lodge Rifugio Pomedes, and with it the start of the via ferrata, by driving to the mountain lodge Rifugio Dibona, where there is a large car park, and taking track n° 421.

The via ferrata starts immediately with some vertical sections along the rock, leading to a saddle providing views of the majestic Tofana di Rozes. The entire route consists of an alternation of challenging vertical moves calling for good physical fitness, with some small saddles that make it possible to appreciate the majestic beauty of the surrounding peaks.

From the top of Punta Anna at 2,731 m, you have an incredible view, a 360-degree panorama that takes in all the Ampezzo Dolomites. You will be able to admire Croda da Lago, Becco di Mezzodì, the Tofane group and the valley below.

From the top of Punta Anna, carry on along the ridge until you reach the fork: take the track on the left that will take you along the Bus di Tofana scree slope, then descending along the Valon de Tofana scree slope, so that you end up just below the mountain lodge Rifugio Giussani. The descent down the scree slope calls for considerable mountaineering experience and also requires good hiking boots.

From there, if your car is parked at the Rifugio Dibona lodge, take track n° 403 which will bring you straight back to the starting point. If on the other hand you started from the Baita Piè Tofana restaurant, take track n° 403 towards the Rifugio Dibona lodge, but at the fork, turn left onto the Astaldi equipped trail which will bring you directly to the Rifugio Pomedes lodge. From here you can take the chair lift back down to the car park.