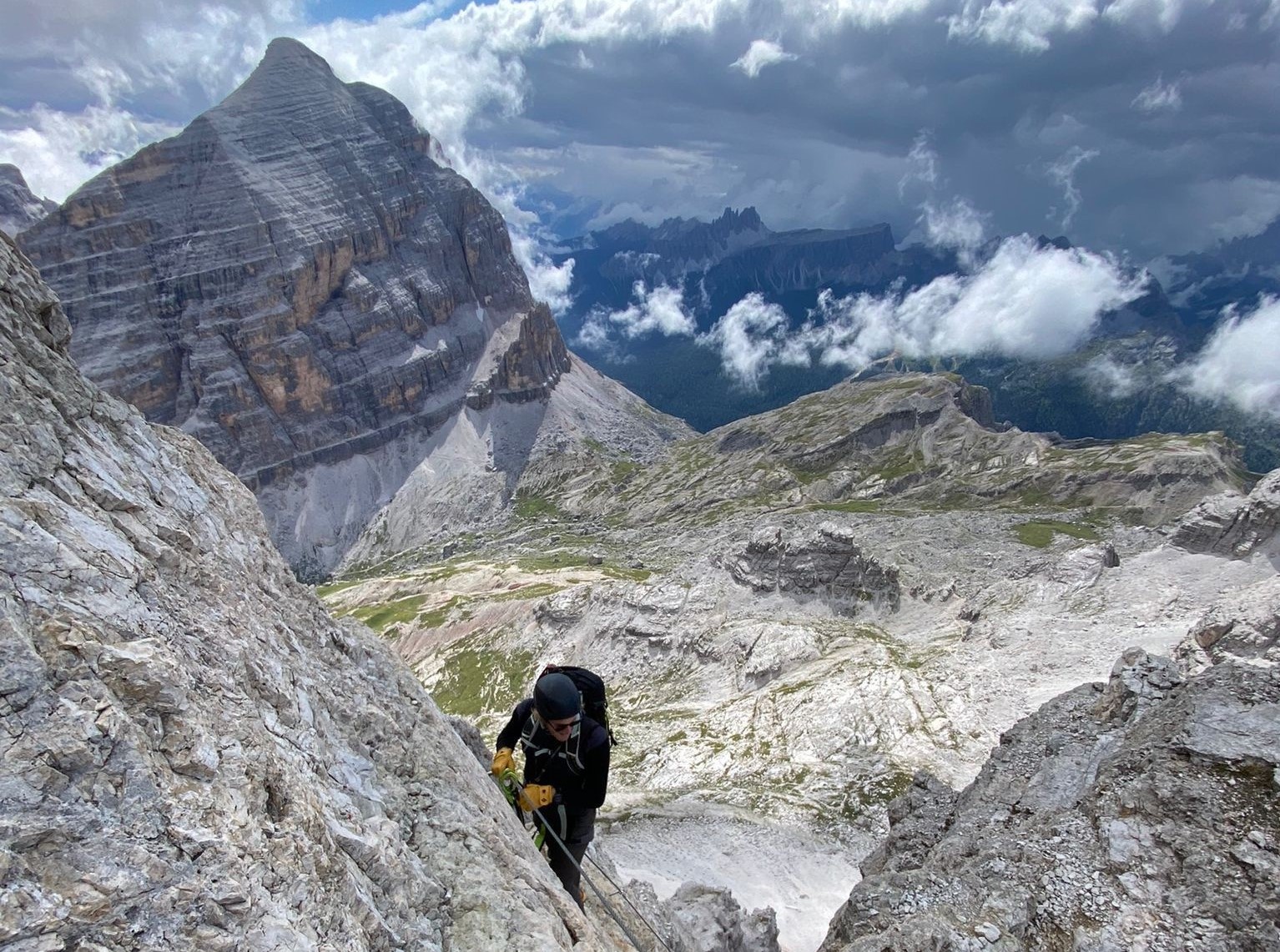 The Tomaselli is a particularly panoramic and exciting via ferrata, but it is physically and technically rather challenging, as a result of the path’s difficulty and exposure. Considering the many vertical sections, a good level of physical fitness and experience is essential. When you reach the peak at 2,980 m, you are rewarded with one of the finest views in the Dolomites: you can see many peaks, from the Tofane mountains to the Pale di San Martino, and Civetta. The Tomaselli is an unmissable ferrata for mountain-lovers, partly because it is one of the most complex, scenic and rewarding ferratas in the whole of the Dolomites, and partly because it brings you to locations connected to the Great War.

To reach the start of the ferrata, head towards the Falzarego Pass where you can use the large car park. Take the Lagazuoi cable car and once you have reached the top, follow track n° 401 until you reach the saddle Forcella Lagazuoi. Then take track n° 20, which already enables you to view remains dating back to the First World War. Keep right at every fork, until you reach the intersection with track n° 1020 which takes you around Gran Lagazuoi. After about two hours you will reach the start of the via ferrata. The whole route is particularly aerial and exposed, and calls for a high level of fitness and experience: in fact, the Tomaselli is considered one of the most difficult ferratas in the whole of the Ampezzo Valley.

The via ferrata is challenging right from the start: the first sections are in a cleft, then continuing along a smooth vertical slab. The first half of the route is dominated by vertical walls. Then you continue towards the left and onto a smaller vertical slab. After having reached a small terrace, with the protection provided by the fixed rope, you climb a series of walls that lead up to the ridge, from which, after completing a final vertical slab grooved with a cleft, you can reach the summit at 2,980 m by crossing an easy sequence of boulders.

When you are at the top, you have an incredible view: on one side, there are the imposing Tofane and Fanes groups; on the other, you can see Pale di San Martino, Civetta and Pelmo.

To go back down, the descent is on the north side. The metal cable will accompany you until you reach the end of the ferrata: from there, take track n° 1020 which brings you to the saddle Forcella Travenanzes, completing the circuit around the mountain Gran Lagazuoi. When you have reached the saddle, take track n° 402 which will bring you to the Falzarego Pass, or alternatively, take track n° 401 which brings you back to the Rifugio Lagazuoi mountain lodge, from where you can take the cable car back down.

This is a demanding Via Ferrata. The brief initial traverse and the vertical wall leading to the summit crest contain sections that are good indicators of the hiker’s ability.
Share on: